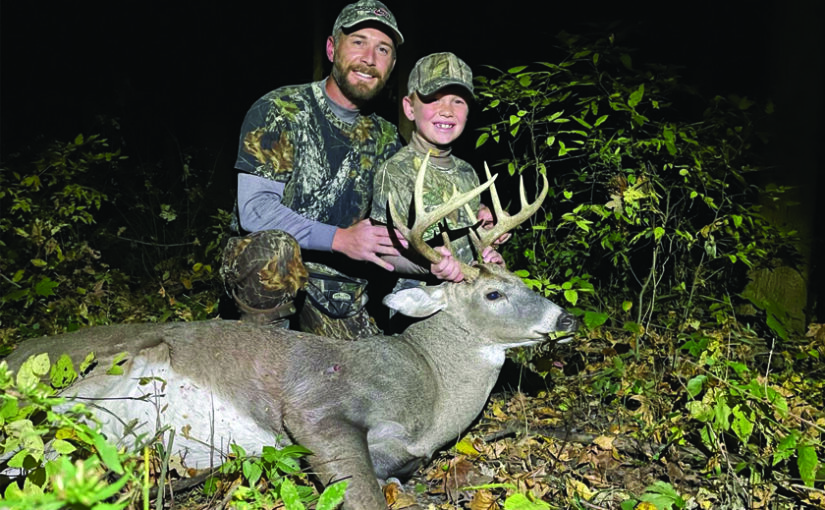 I peered down the trunk of the large Red Oak from my tree stand perch twenty-feet high as my twelve-year old nephew was climbing the steps toward my position.  His eyes revealed – he was petrified of this climb and was attempting to overcome his fear in order to save face with his uncle David!  Recognizing his trepidation in this climb, we agreed the best action was to retreat.  We would find a suitable ground position for this mornings’ gun opener in the 2000 Illinois Gun Deer season.  After all, my stands are scary for most as I, an old Bridge Gang employee on the Railroad was accustomed to scary climbs and not yet using good sense in applying the proper safety measures climbing into my stands!

This was the first deer hunt for my nephew, Kyle Frank, and as the morning progressed, he was able to score on his first whitetail!   After the shot, we waited appropriately before searching for the animal.  The shot was true, and the deer had succumbed shortly after the discharge of his slug gun.  Kyle was genuinely affected when he saw his uncle David give thanks and reverence for the life we had taken with tears in my eyes!  A new Deer Hunter had been initiated!  We drug our prize from the woods after proper field dressing and butchered the doe upon arrival at my home several days later.  This sequence of events provided a learning experience for this new hunter.

Forwarding in history to 2022 in the opening days of the Indiana Archery Deer season, Kyle’s son Wyatt is now being tutored by his father in the finer points of Deer Hunting.  The following is a brief summary of Wyatt’s first antlered deer as communicated to me by Kyle and Wyatt:

“September 15 kicks off our reduction zone archery season so we’ve been hitting the woods every weekend. Running cameras, we had the 6:00pm buck in the evenings hitting the scrape line hard. Wyatt has been passing up multiple shots at doe, so he didn’t mess up a chance to shoot the buck he named “Grandpa!” On the evening of Oct 23, we got in the stand around 2pm. The farmer was harvesting the corn to the west of us. Our stand is located along a creek where it funnels into other woods, so we see deer quite a bit. As the evening was coming to an end, a doe came from the bedding area around 6:15pm from the east as she followed the creek behind us. As she passed through, we heard a heavy walking deer coming from the same area. This beautiful 10pt following the trail to the field comes to 20 yds. broadside in front of us and stops. Wyatt pulls up his crossbow, but he can’t find him in the scope. The buck starts walking again and I’m telling Wyatt I’ll grunt to make him stop again at the next opening. As he’s 2 steps from the field I grunt, stopping him for a perfect 26 yd. Shot.  He high kicks and runs 40yds. and crashes. We are both shaking and extremely excited, I was shaking way worse. Ha!

We waited in the stand for an hour in the dark, sitting there thanking the gods for this opportunity to harvest such a beautiful creature. “

Later as I spoke with Wyatt and congratulating him over his success – it was obvious, he was taught by his father, the finer points of deer hunting with proper safety measures taken and most importantly to respect the animal he has successfully hunted.  Utilizing the current methods, young Wyatt was afforded an opportunity for success in the woods most of us never experience at such a young age.  His father taking the time to train him in proper usage of the equipment, proper safety precautions and explaining the way of the Whitetail escalated his experience in the Deer woods.   Most importantly to respect the majesty of this creature so gifted in their ability to thrive and prosper over the generations of their existence.

As my days hunting deer begin to be numbered, my hope is the new generation will keep this reverence alive for the future. It appears at least one young hunter, with direction from his father had been initiated in the proper mindset.