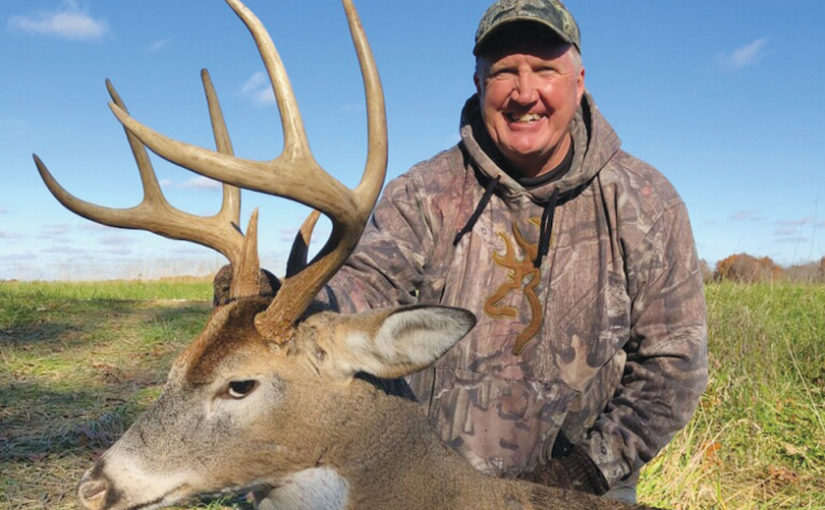 Straining to see the upper limbs from my position firmly on terra firma indicated no green growth whatsoever!  She was gone!  Feelings of despair, loss and disappointment entered my aged brain.  Although the signs of her ultimate demise were beginning many years before – the hope was she would outlive my existence on this planet, but it was not to be!  She was chosen as my first site for a hanging stand.  Through dumb luck or precise location utilizing the rising eastern sun, prevalent wind action and the natural travel pattern of the Whitetail, she would become the icon of my outdoor pursuits.

Both positive and negative life and hunting memories flooded the portion of my cranial remnants still able to function.

What seemed like yesterday, the draw was slow and deliberate on the six-point Buck when movement was noticed to the Southwest.  The draw was relaxed with a deliberate glance back to reveal a larger eight-point Buck in tow!  This follower was the biggest Buck ever encountered during my early bow hunting attempts.  The shot was poor, and the hit was high in the back well behind the vitals.  After an agonizing forty-five minutes, the trail was sought.  The early seven-forty-five morning shot created a difficult situation but at two forty-five that afternoon, the buck was dispatched with a second shot at mere feet distance!  The process of finding that deer was the most educational learning experience of my outdoor existence.  Controlling one’s emotions, being vigilant to expose the slightest sign and taking a never give up attitude brought success.  Also learned when all else fails, to adopt the attitude of “if I were in extreme pain and incapacitated – how would I move in this terrain and where would the safest shelter be.” This thought process has worked many times in my career afield to locate deer not immediately found.

Although many Bucks have been taken from this location -that first Buck, many years ago, will be a forever memory!

In 1995 with the northwest wind howling and snow on the ground the giant ten-point Buck approached looking for his next girlfriend and no Buck in the woods would dare attempt to stop him!  I did not notice him early enough when in range and as he looped just beyond my distance of confidence; my heart fell to the ground!  After he vacated, tears rolled down my cold cheeks as my head touched the rough bark of the tree holding my elevated position!  My possible bow shot of a lifetime was nixed by lack of attention!  The mere thought of this experience burns in my chest even today!

In 1999, the largest deer ever experienced afield approached from the Southwest and stopped a mere twelve yards from my position but with his vitals behind a double trunked white oak!  Slowly the draw was started in anticipation of his further movement or just picking a spot and hitting it!  Will this ninety-pound draw compound have enough energy to dispatch this monster was my thought when he reacted to a slight eddy of wind giving him concern causing him to bust away quickly!  He stopped only briefly at forty yards to look back!   His back was so wide – only the most bowlegged cowboy could have mounted him!  It would have taken two hands to encircle the circumference of one of his beams, but he was never seen again!  Only a true bow hunter can appreciate this heart break possible in just a few seconds!

Just last season, a Buck approached from the North along the corridor just above the canyon drop off just as many have done over my vigils on this perch.  He was halted with my mouth grunt and the shot with my real bow was quick but lethal!  This old hunter was still among the bow hunting brethren who are successful!  Noticed prior to this experience with the deer, the leaves were non-existent around my perch where normally they would have needed to be trimmed to clear my shooting opportunities.  The upper limbs had very few autumn expired leaves hanging.  Although slow in coming, was my favorite perch now on her last legs?  The thrill of the hunt superseded the concern over my perch.

In the spring and approaching from the south east, my stand still hanging in the old Oak was perfectly hidden by the natural growth of limbs she provided.  Her trunk and limbs held a darkness not seen in the past!  My search for budding growth or visible leaves revealed no life!  My first stand!  Placed in this Red Oak in 1989 is my number one producer over my hunting career to date!  She could through memories alone keep me vigilant in the stand all day!  The surrounding trees had slowly outgrown my old friend capturing the morning Sun’s rays more efficiently.  Her time has come and gone and although I wish she would have provided my final hunting years among her limbs prior to her demise – it was not meant to be!  I will miss the cold shudder felt when the Sun would reach my perch within her limbs bringing the thermals to slight rustle to just barely override the warming rays of the Sun!  She provided my first record book buck many years ago and possibly my last taken last season!  The circle of life, although understandable, often is painful.