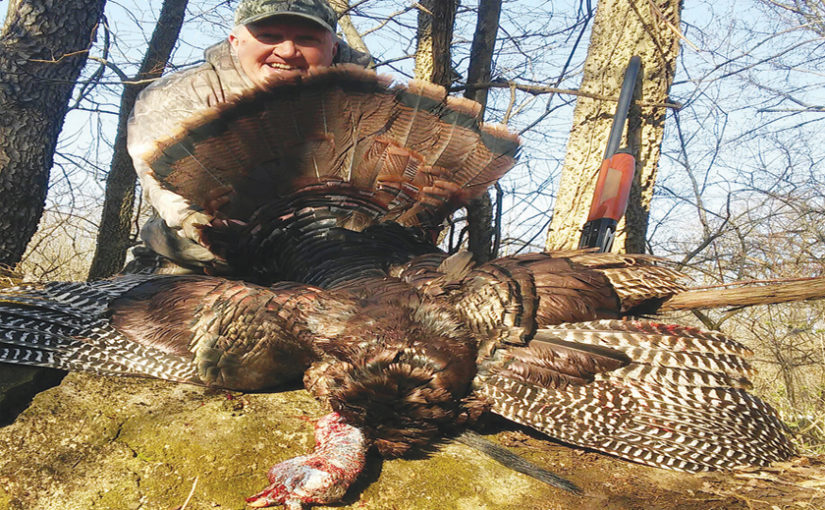 My right eye fixed on the bead at the end of the ventilated rib was solid.  In slow motion a red tinged head appeared over the apex of the ridge only twelve yards distant but it vertically paralleled and was partially blocked by the small diameter tree between us!  At this distance any impediment to the shot charge would ruin my pattern, he moved slightly to his left blocking his head in entirety!  Should I risk movement?  No – at this distance any movement would be noticed, and his head would disappear for good!

Two days earlier my set up was on the edge of a timber patch bordering a cut cornfield.  This location had produced many birds over the years and was my first choice this morning.  My tree calls elicited a booming gobble from the giant valley to my East.  It sure sounded like my old nemesis from last season when I succumbed to defeat over many attempts to gain success over this old Monarch!

Sure enough, he moved away to the North announcing his intention as he moved!  No need to call any further, he probably recognized my mouth diaphragm induced noise.  I should have used a call never previously worked even if it were over a year ago since he had heard my calling.  I waited until quitting time with no success but thoroughly enjoying the morning activity. “Give up and go elsewhere tomorrow morning where success would be easier to obtain.” I thought. Far too ignorant to admit my lack of skill, I vowed to return the next morning.

The next morning, I was in the same field waiting to hear his gobble.  Cloudy and windy conditions were not to my liking but still the eagerness to do battle was driving me on!  Nothing for what seemed like an eternity.  Finally, I broke and gave out a loud series of yelps with another mouth call than previously used.  A gobble broke through the wind giving away his location.  I crawled and climbed over the downed locust trees and ravines eroded on the steep hillside separating us in an attempt to be in position if his lady friend elected to bring him in a southerly direction a fifty-percent chance!  Remarkably, I got to within one hundred yards of them and decided to move no further.  His gobbles then sounded further away and once again I was dejected.  I crept further to the north but decided to wait for the duration if he elected to backtrack in this deep valley.

At noon, surrender was again accepted, and I climbed the steep hill out of the valley.  Smart enough to enter any field slowly – I was rewarded with the sight of my antagonist in full strut not more than seventy yards distant with the sun now highlighting his skills in choreography practiced to perfection.  Was he alone?  No hen was visible but surely, he would not put on a show alone?  I dropped down and got ready – hoping for good luck!  The magnificent bird swayed back and forth as he reduced the distance.  He seemed vulnerable but due to maturity on my part – the distance was not within my range of confidence and I withheld my shot.  He left my line of sight.   I panicked and let out a loud mating cackle but was rewarded with a gobble from a distance confirming my defeat again!

The next morning, I would be in the valley hidden well before dark and I vowed no call would emanate from my person for the duration of the hunt.  The overnight Northeast wind was not to my liking, but it was not strong enough to alter my birds’ roosting pattern, or was it?  Leaning up against a tree ready for action the tree call of a hen was heard only yards away.  Great, where is my Boy?  Suddenly, his voice boomed from across the valley on the hillside protecting him from the wind!  He would surely come to this hen behind me and I would be in perfect position!   After an eternity, he left his roost and began strutting on the clear wooded hillside across the valley.  Thereafter, he left in an Easterly direction away from me in true to his nature form!

Knowing better, a stalk was initiated – up the clean wooded hillside to near the top – I could make out his gobble in the field to the east and then his movement to the north.  I slipped below the lip of the drop off and followed his gobble.  I made the prediction he would move back to the west in the valley he occupied leading back to my original hiding place.  I silently slipped ahead and below his line of sight awaiting his next gobble to triangulate my ambush to perfection!

Using a tree for breakup and lying on the ground with barrel in position, I waited!

Back to my earlier description, with his head hidden – I knew he had eyes to see around trees and I was sweating like a convicted petty criminal being sentenced to a week-long “Mother-In-Law” Convention!  Would I be defeated again after such a rich opportunity!  Still I held!  He moved revealing his head clearly – the brain to trigger pull request seemed in slow motion when finally, the charge initiated ending his reign!  A tinge of remorse was felt over this finality – he had earned my ultimate respect!