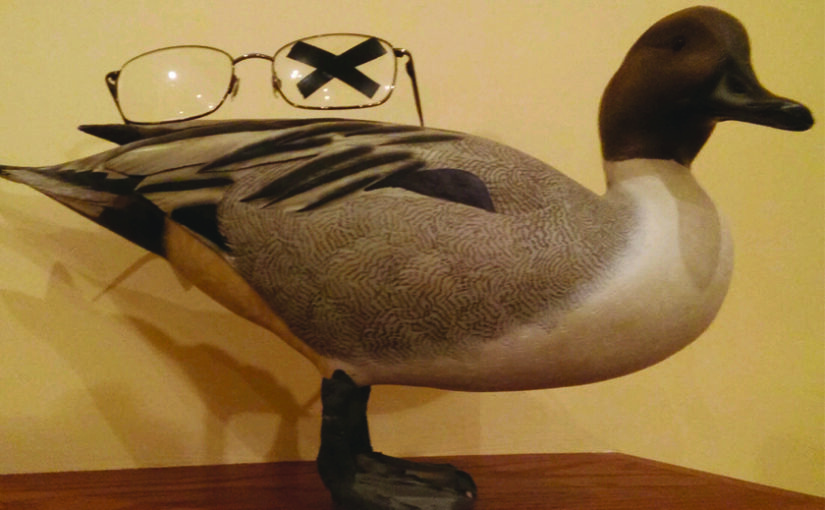 The Lost Lens of the Hunters’ Glasses!

This story is written with some trepidation as it is absolutely true!  The three actors involved in this real-life event have sworn an oath to never tell this story!  Until now, the oath has been adhered to, but the statute of limitations has surely run out and besides one if the other participants have leaked bits and pieces of this tale so as a reasonably astute listener can fill in the blanks!   The writer feels as if he has been exonerated from his earlier promise!  The names and location have not been divulged to protect the innocent and after all writers block is an affliction difficult to overcome and this tale will fill the void!

Three hunters drove to the location necessary to embark on their Duck Hunting excursion this morning not too many years ago.  Two rode together in one vehicle and one separate in his personal truck.  The boat ride to the blind was uneventful although water levels were low and the silt deep in this blind’s location on the lake.  Upon entering the boat hide attached to the blind, I hopped into the blind and its’ darkness and began to receive the other hunters’ gear and guns to distribute to their intended locations within the blind.   The sight of fleeing mallards in our spotlight as we approached the blind and the excitement in the voices of the hunters having hunted this location the previous day fueled my optimism.

Light eventually came and with it a “Duck in the Dark” mallard or “Suicide Duck” and a “Gadget” Gadwall had already succumbed.  The day before us seemed favorable with great potential! Small groups filled the sky further fueling our enthusiasm. With light now upon us, one of the group complained of blurry and double vision! My self and the other participant noticed no blood or garbled speech, so our diagnosis for the afflicted was to possibly slow down and relax, for we would pick up the slack on any approaching mallards!  After twenty minutes, the afflicted was no better and indicated he felt lightheaded!  He was instructed to have a cup of coffee and we would reassess later!  A group of mallards darn near bought it in the interim.

The afflicted in this scenario had cause for concern as he had suffered a stroke earlier and these symptoms were mimicking his earlier experience.  He requested we return him to his truck, and he would seek medical attention if no improvement was noticed.  Not wanting to cut down on our potential success, he was coached to remain vigilant for a while longer!

Now having earned a degree in Political Science in my school days and having observed self-centered politicians over my years triangulate their stated views based on public perception and usually ignorance within the herd, my childhood Christian values surfaced, and I volunteered to drive the afflicted home in his truck upon exiting the blind!  The high road had been taken and the other hunter complied with the request to return the afflicted to his truck.  The afflicted refused my assistance as he felt he could manage and besides he had his phone handy if his condition worsened!  His gear was loaded, and he was transported back to his truck.

In the interim, being Obsessive Compulsive with a passion for the organized, I began to police the blind for clean-up in their absence.   A glint of light reflected from the floor as if broken glass littered the blind floor.  Upon closer examination the source of this light was a single bifocal lens from a pair of glasses.  A call was to be placed to the departing hunter, but his number was not in my possession.  At this time the returning hunter motored up and into the blind.  Did he have the number?   Yes and since his frames had lenses intact we surmised the lens belonged to the departed.  We surmised the lens had popped out during the transfer of gear into the blind under the cover of darkness.  My partner called the departed with instructions to check his glasses.  The response was immediate!  You could sense the embarrassment over the phone!  His earlier symptoms had been purely psychosomatic but highly understandable under the circumstances!

Having empathy for the afflicted and my decision to offer assistance may have offered a glimpse into my better nature but in reality – I did not want to disrupt our hunt either!  The old adage is true; “you can judge a man’s true character after only a few hours in the duck blind”.  My apologies to those involved as we all far short of the ideal.