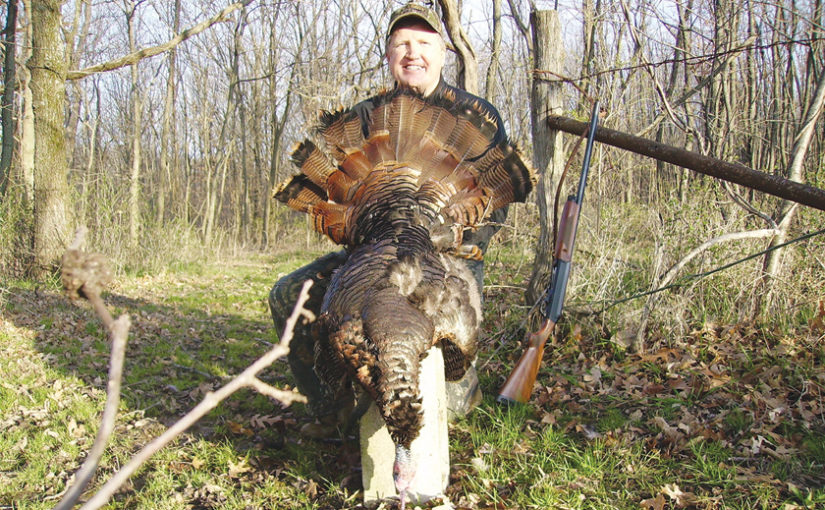 Two vacation days were scheduled for the Turkey opener.   Leaning up against the giant oak on opening morning in great anticipation of another successful opener in the same exact spot as the previous six years was not a given.  As it turned out – my streak was about to end!  Birds were in the area, but none responded to my offerings.  One bird east of my location was steadily answering my calls but would not budge from his location, from his change in sound it was apparent he was strutting back and forth but was not willing to deviate from his game plan!

Early season in the turkey woods this far north does not include greening vegetation to hide your movement forcing one to keep still and hope your vocalization goad the Tom to be the first successful suiter in the woods and to come calling!  My ten-year-old hen decoy was starting to show her age but why upgrade as she had always worked in the past. My streak of opening day success officially ended that year and now pressure built for my remaining vacation day!

The next morning was a duplicate of the first.  I let nervousness take over and decided to move across the valley to get closer to the vocal bird whose voice still resonated with conviction although he must be getting a sore throat by now!  I crept slowly through the valley and climbed the hill to the East.  Knowing the urge to minimize the distance between myself and the solo artist would be great but doing so usually scares the bird as his hearing and eyesight far supersedes that of a mere human.   I kept a good distance and attempted to lure him closer but to no avail!  At best he was still communicating!

After some time with no sign of his breaking the stalemate, I decided to become aggressive.  Usually this is a harbinger of failure!  He was definitely across another small valley just east and north of my location.  I knew the valley was steep and filled with downed tree stumps and limbs but if one could sneak down the creek from the Southeast theoretically one could sneak up below his ledge of safety and source of his staging racket!  Waiting for the following weekend for another turkey hunting attempt was not to my liking so the plan was put into action.

I circled wide to enter the creek valley so as to not alarm my target.  Luckily the spring has been wet and all leaves were soaked and silent under foot. I moved as if in a death crawl, not making a sound.  The creek held running water and care was given to not disturb the water or create the sucking sound boots can make being extricated from the mud.  So far so good!  I could hear his steps on the leaves and his booming gobble only yards above me as I approached.  If silence came the stalk had failed!

Once below him directly, a near vertical hill would need to be scaled to peer over into his domain.  Foot and hand holds were dug out of the wet hillside – my body was covered in mud to the front as I ascended the hill.  We were so close I could hear his eyelids close and I was certain he could hear my heartbeat!  It was a miracle to be this close!  Don’t blow it now!

As I neared the top of the hill and near the ledge lip, I readied the gun for action and moved my head upward in super slow-motion scanning everything with the hope of seeing him before he sees me!  As my eyes peered over the realization was evident – he was another ledge higher and still out of sight!  I waited for an eternity for him to move into position for a shot, but he did not, and we could not have been more than eight to ten yards apart!  I finally belly crawled nearer the base of the small ledge he occupied and slowly rolled onto my back to ready for a shot! He was still not visible and only feet separated us!

I rose in super slow motion and scanned slowly when finally, my eyes could see over the lip of the ledge.  At about six feet distance a blood enriched head full of wattles with a big black eye was peering into me!  He was about as surprised as a Turkey can get but decided to vacate on foot rather than in flight as he would have needed to fly straight over me to escape!

I pulled the gun to shoulder and followed him through the woods pulling the trigger as soon as his head was clear but no response from the bird but to turn ninety-degrees headed south!  I let the second shot go ending his escape!  A soaking wet mud covered hunter was in a zone of happiness that defied description.  My unorthodox stalk had been successful as my target Tom was sure his chosen strutting zone was safe beyond imagine!  He did not realize my determination level or pure naïve stupidity would do him in!