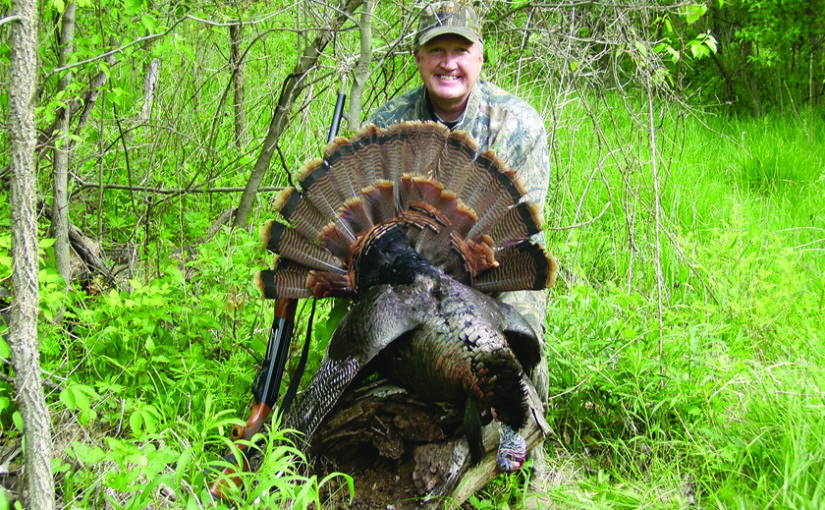 Having the luxury of possessing a landowners Turkey Tag permitting hunting on grounds owned for the time necessary during the season to bag a turkey turned out to be a curse during this season a year ago!  Opening day enthusiasm and anxiety over your opportunities for the day and season were present as always.  At least the weather was almost perfect for the start!  Little did it occur to this hunter – a month long retreat in the psychiatric ward for those addicted to Turkey Hunting would have been the better choice for this season!

Almost immediately the booming voice of this old gobbler sounded off in close proximity to my location.  He was on a tall ridge top approximately three hundred yards distant.  My light tree calls let him know of my presence but after a while and after my best fly down cackle – still no advance from my intended success for the year.  After the memory of my imaginary scenario for the morning had evaporated with still no advance from my adversary, the decision was made to advance toward the sound of his voice.  This is always a bad decision in the early season as no foliage hides your stumbling through the woods and the leaf cover on the ground was not wet but not crunchy either!  This was the beginning of a hellish relationship between us!  The battle was on between the old Monarch and the Master of Turkey hunting (possibly in my mind only)!

The off side of the hill was traveled staying out of sight in order to close the distance.  My movements would have made the best Indian Hunter proud as no sounds or sharp movements were made on my advance.  Now in position just yards from my bird still in the roost tree!  Experience dictated to move no further as any sound or movement would reveal my presence.  He hit the ground only yards from me but just out my line of sight over the hill top!  Frozen like a good Indian – the long wait began.  He strutted back and forth, to and from on the flat top just out of sight – still I remained frozen, fighting off the temptation to advance for a peek!

His exodus from the roost tree took him the opposite direction and with it my hopes for a quick victory!  Back to my initial set up probably abandoned in error in the first place!  No success occurred on day one other than pure consternation over my “should have done this and should have done that” thoughts!

To spare the reader and the writer the agony of retelling the next five days of hunting  for this unholy nemesis, I will shorten down my six encounters to just the final encounter as follows: heat and green had returned to the turkey woods along with gnats and ticks.  Each day his gobble was identified and despite differing locations and calls with my set up he would not advance!  The guerrilla option was now my plan!  Being headstrong and competitive mandated further attempts on this bird! A smart hunter would have found more receptive Toms’ elsewhere but not to be outdone his pursuit was continued!

After crossing several deep canyons, sometimes more than once, to advance ahead of the bird’s expected line of travel – his voice was approaching my position on the side of the steep hillside.  Experience told me to not move but my position was not the best!  After an eternity, I shifted my gun in order to begin a gradual ascent to top the hill side.  The unmistakable putt of Mr. Turkey broke the tension – I quickly readied for a shot but old age, poor eyesight and bad positioning gave me the gut wrenching feeling as old Bronzeback exited his vantage point for safer surroundings!

One o’clock was almost upon me as I exited the woods to the gravel road to the east.  Surely this bird was in the next county after our encounter.  My mind was now on lunch rather than the agony of defeat yet again.  Trudging up the gravel road a hen raced from the field a short distance away – seconds later followed by you know who!  My defeatist attitude had cost me the bird now shortstopped by a willing Hen! Over this five day period, the guns’ safety had been clicked off not less than six times as we were that close to each other on that many occasions!

Anger, despair, and hopelessness were now gone and like a condemned man accepting his coming execution, accepting the inevitable was at hand!  OK you win!  I had been defeated!  I offered my congratulations and hoped he would repopulate the county with his offspring (hopefully lacking some of his smarts)!

Tomorrow will be another opener – I will be back in the woods for another go at him but wiser and with my bruised ego slightly healed, more humble!