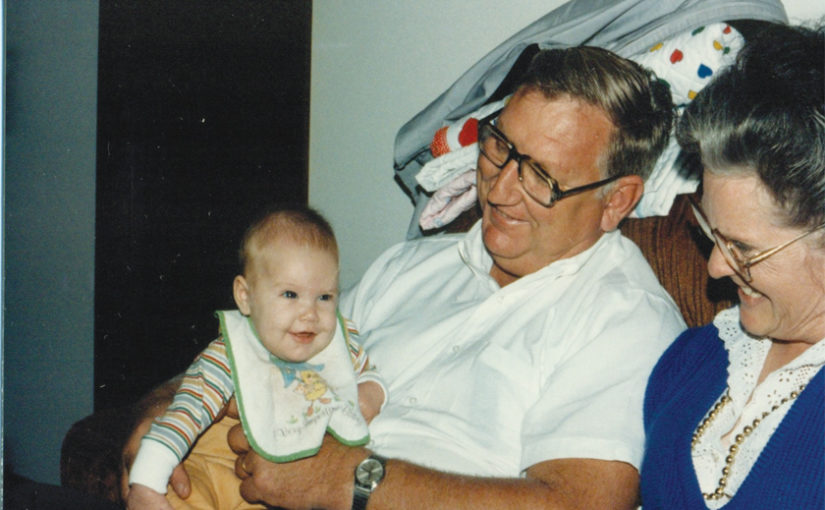 Maturity in the Woods!

The other kids on the bus ride home from school made fun of the small wood frame house surrounded by all manner of unfinished projects.  Lived in and functional was the preferred description but un-kept was closer to reality.  The school bus was at the apex of its travel route to get to our home location, over the road commonly referred to as the “Santa Fe Trail” by the riders because of the many pot holes and loose gravel!  For a city or suburban person, the area was out in the backwoods – a place where they could shoot their guns at beer cans on the many oil well roads through the woods.  For me, this was home.  I did not yet realize at the time, farm properties where functional first and foremost not showcases for “Better Homes and Gardens”.

My Paternal grandparents lived off of the land.  The small parcel they occupied necessitated growing your own vegetables from the garden, fruit from the orchard and picking fruit from neighbor’s trees with unused crops and wild pear trees in the woods.  A raised hog provided meat in a normal year.  On a good year a steer would be butchered for meat.  Soap was made and cane cooked down used for sugar.  Milk and butter was derived from the small dairy herd which also derived a small income from milk sales to the route driver of the milk truck.  Excess row crop yields were sold upon harvest, if not used for feed for the cattle.  Eggs from the chickens, garden vegetables and flowers were sold on a truck route each week for income.  Our homes’ location was located on the southeastern portion of my Grandparents property – given to my father for his start in life.  He with help from others built the home I grew up in.

Hunting was considered a recreational activity. There was no such time for this activity in this lifestyle.  If a squirrel, rabbit or pigeon was shot – it went directly into the food chain.

My grandfather, John Herschelman, tried to work in town after he married my Grandmother, Esther, after two weeks he returned and told her they would survive on the farm or they would not survive.  He kept that vow in entirety until his death in 1963.

My father, Wilbur Herschelman worked under these circumstances along with his older brother, Charles Herschelman until they both married and began to work off the farm.  My father started in the Faultless Caster factory at eighteen years of age and worked there for forty-four years until his untimely death two short weeks of his chosen time to retire!  He worked on our farm purchased in the early 70’s his entire lifetime as well as other jobs to help subsidize his income.  He never liked having a boss or “working in town” but the farm could not support his family alone – he toughed it out without complaint.

I can remember the taillights lighting up on his way out the lane just before he turned left on the hardtop road on his way to work before dark!  He would ice down a Double Cola for his trip to work in the morning, managing the drink in a real pick-up truck built well before the advent of cup holders built into the “Sissy Trucks” of today!    I remember the skin problems evident on his muscular arms from the reaction with the cutting oil used in the shop where he worked.  He would pick me up from basketball practice in his old Studebaker that belched blue smoke from a broken piston ring.  He would rebuild the motor later to keep the car in running condition.

I remember changing broken motor mounts on our old car, rebuilding the generator (prior to alternators) on the kitchen table on the same car and replacing broken parts on farm equipment often tearing them down out in the open cold with a trouble light one night and replacing/repairing them the next evening on the same cold gravel work place.

I have seen him free frozen bearings or break rusted bolts loose by sheer force of his work ethic and strength!  We could not afford a torch or welder in my early years, we would ask a neighbor for assistance if one was needed.

At seven years of age, my Grandfather died, many of the old ways were replaced by more modern conveniences for my grandmother but she worked the truck route and all her gardens into her eighties. Her mental and physical toughness are rarely matched in my generation!

As a young boy, my father took me fishing several times on local farm ponds where we would catch pan fish and the infrequent squirrel hunting trips were like big game excursions to this country boy.  The farm life was dependant upon nature.  Nature was respected almost to the degree of the Native Americans as it was your lifeblood for survival.  I would help my father farm and would be allowed to farm a portion of our rented ground as income for myself.  This process was later transferred to my younger brother, Scott.

When the call came that May 1996 Saturday afternoon – my father had collapsed while pulling saplings out of the ground with a log chain and his old IH 400 tractor, found by a passing motorist unresponsive on the road by his running tractor.  He was gone!

For him, life had begun on his fathers’ farm and had ended at his own farm.  A one half a mile separation in distance and sixty two years in time difference!

I would never get the chance to apologize for my being ashamed of our home and lifestyle as compared to my friends at school in their nice suburban homes and new fancy cars!  Fortunately, on the Easter break earlier that year while riding with my dad he apologized for the doing without lifestyle my brother, Scott and I, the two oldest, endured as money was very tight in those early years!  With tears coming from my eyes, I told him it was the most valuable lesson one could ever learn and as far as I was concerned, he was the best father one could ever have had as he and my mother loved us very much and did the best they could to teach us the valuable lessons in life.  Little did I know how important this moment would become!

I had the opportunity to hear the great quarterback of the Pittsburgh Steelers, Terry Bradshaw, speak during one of my work conferences.  Although then not a fan of his, he struck a nerve to my heart when he joked at the tremendous amount of money he made as an analyst for FOX sports just to talk football! He would talk football for free!  After a brief silence, he looked into the crowd and said he would trade all of the money he had ever made and would make in the future for the chance to hug his father one last time and tell him how much he loved him!  How true these humble words were!  He had earned a lifetime fan with this admonition.

One of my closest friends, Harry Canterbury, has always told me the man does not become a man until the passing of his father.  I know this now to be true as the trivial problems of your youth and the understanding of the ways of the world do not come into focus until you have experienced the maturity of age and experienced the teachings of your father. You now become a man with all of the resultant responsibilities!

From the smell of freshly turned earth from a moldboard plow, a freshly picked corn field, the bawl of a young calf, his old Farmall Super M still parked in the barn along with driving past the now vacant factory building where he spent forty-four years of his life all trigger memories of his life.  I look to the sky and thank him for his sacrifice but now wish for the opportunity of his advice as I face the shortcoming and difficulties of life he once experienced!

Yes, I will go afield in search of the big Buck this season but will I let the arrow fly?  I will face that choice, but wisdom and maturity now enter into the decision!