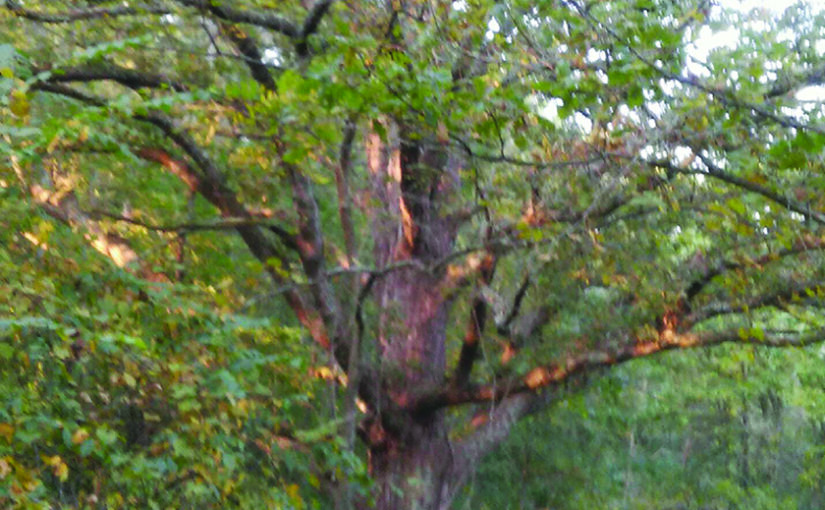 A Moment in Time

Every year a request is made to my spouse to chain me to our couch from October 1st until the date the Bucks begins their pursuit through the woods in search of the first receptive female!   The pent up anticipation is too strong to contain my desire for the woods and the first hunts hoping to find an unsuspecting deer wandering through his home territory with or without the assistance of his bachelor clan elicit activity.  The now sixth day into the Archery season had produced many unsuspecting deer but no “Big Uns”!  Experienced Hunters know each year is a new indoctrination into the sport as equipment must be upgraded, stands moved and inspected and any new toys are tested.   The only real action was interaction with “Hackelia virginiana”, commonly referred to as “beggar’s lice or sticktights”.  To date the prevalence of this menace is overwhelming and appears to be the “Year of the Sticktight” in my opinion.  Your walk into your stand may yield a morning of removing their seeds from your clothing regimen.

While earlier assisting others in food plot preparation, hanging of stands and overall getting ready for the season activities much of my normal routine was behind schedule and needed to be accomplished during mid-day after my morning sits on the stand and before afternoon hunts during the first days of the season.  The state ground available on Lake Shelbyville was my chosen destination this morning. The trek into my chosen area had been almost accomplished packing my climber and bow – it was then I realized my fanny pack was left in the bed of my pick-up truck exposed!   Oh Well, if confronted by a DOC Officer – all documentation can be verified with a walk back to my truck.  Upon more consideration, the decision was made to return to my vehicle to retrieve the left pack as my phone and licensure were included in its’ contents.  The day light was becoming stronger, rather than a long trek back to my intended spot, a closer alternative would need to be found.

An overgrown drainage was entered which looked very “Deery” to me and a tree suitable for climbing was identified with a good view and shot potential.  As I affixed my climber, marks on the tree indicated prior contact with a climbing stand!  Sure enough, the Bush Honeysuckle around the base of the tree had been trimmed!  Only six days into the season and I pick a tree in the thousands of acres contained in this public area already having lost its’ virginity accommodating a hunter!  Now daylight, the decision was made to continue my climb after all what was good enough for the previous climber would be good enough for me!

Although no deer were seen this morning, a deep appreciation for this spot was developed.  Thirty yards to the North stood a massive white Oak with a circumference measured in yards rather than feet!  Her limbs spread evenly indicating she had no competition for sun during her early growth cycle.  Her lower limbs were larger than most mature oaks found in the area.  The slight valley where she stood protected her from the strong winds over her lifetime and the drainage kept the soil moist for growth.  Two massive Oaks grew in the opposite direction within fifty yards of her, both giants, but half the size of what was possibly their mother tree!

A Gray Squirrel could walk out on her lower limbs almost parallel to the ground with a wide enough walking space to accommodate even a squirrel who had found the hidden Moonshine still and partook of the liquid to the point of inebriation!   Giant Oaks can live up to four hundred plus years with two to three hundred year old specimens classified as “rarely common” or “commonly rare” as Dr. Glen Sanderson, a noted professor of Biology at the University of Illinois and Boone and Crockett official scorer once used this verbiage to explain the prevalence of the Non-Typical Whitetail!

At 450 years hence, this tree would have known only “Native American” inhabitants as the colonization of America had not progressed beyond the Coastal Areas and at 300 years hence, our nation contained only 200,000 European settlers again living in the coastal regions. The barely two hours spent in her company barely could be classified a moment in time!   In fact, my near sixty-four years of existence would not qualify me to be in her presence.  No giant whitetail materialized to feed on her bounty while on my stand but if she could talk…