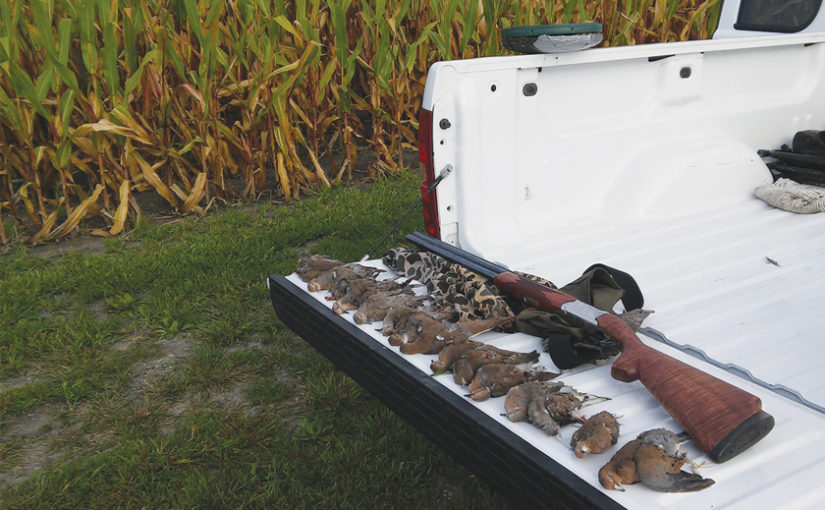 Good and Evil in the Dove Field

Everyone who takes to the field in pursuit of the king of wing shooting, the Dove, dreams of the perfect shoot!  To have target after target approach with your swing through perfect and timing exact with success over your highest expectation with each trigger pull is the dream of all dove hunting participants!  Not bunny shots with birds floating in to sit on a line or feed in the field but with challenge and difficulty in every shot, with your shooting acumen rising to meet your highest expectations.

With great eagerness my entry into the field before dark only tortured my sensibilities as waiting for shooting time tested my moral compass as dove after dove flirted by in the pre-dawn sky.  My over and under with new custom made stock (custom made because I broke the original) was loaded and eager for the first gun on live target test!  Finally the time came and the first shot to my dismay did not connect but the second did and all was well.

As shooting progressed, the bird movement forced me further West along the fence line until my poor eyesight revealed the Shangri – La of Dove spots!  The pasture land was cut down to bare earth in spots by the feeding Horses.  In the corner of the field a new farm pond had been created with a hasty cover crop planted around it to protect the bare earth from runoff.  Surrounding the pond a new gravel road had been created.  To make this spot even more inviting, the pond was only half full of water exposing the dirt walls.  The pond was in the perfect focal point for the foraging birds as the fences all corned around the perimeter, with alfalfa and corn standing or cut in the area, one could not create a more perfect scenario!

The experience met my expectations!  Dove groups, interspersed with singles and doubles filtered continuously to this spot!  My shooting was now relaxed as it was not a question of if but when my limit would be had!  The next ten shots were successful until reality returned but memories of long hunts with limited success, as well as those quick and glorious shoots worthy of a king rolled through my mind.

The reality of this hunt would establish a new gold standard for my Dove Hunting Ideal!  The limit was now had before the school buses had even been around to load their stock for the day of learning ahead!  Surely a few extra doves wouldn’t matter, especially since many a past day afield left me a few short of a limit.  The sheer number of doves still flying must prove the population is well and growing.  The limit standard set by employees of the state must be little more than a bureaucratic control tool as everyone knows the rationale for the activity of this group is questionable.  I am in heaven and do not want to leave should be reason enough to continue hunting?

At my age, the future is limited; taking advantage of my skill and experience to get to this position in the field should be rewarded – right!  My not so righteous thoughts were dismissed as this would discredit my convictions, after all I am grateful for the farmers who allowed me to hunt this location and to meet and experience their children who assisted me and may someday want to hunt this land for themselves.  Our creator deserves credit for the wonderful gamebird – the dove giving our kind the opportunity to hunt this flying acrobat of the sky is satisfaction enough!

Several hunts early in the opening days of this season proved to be as successful as the first but was my success turning into a greedy fulfillment of hunting lust?  The decision to let the area rest was made and although no Saint, my decision was just, and the memory and appreciation of these fine early season Dove Hunts will stand in my memory bank for the days it continues to function.