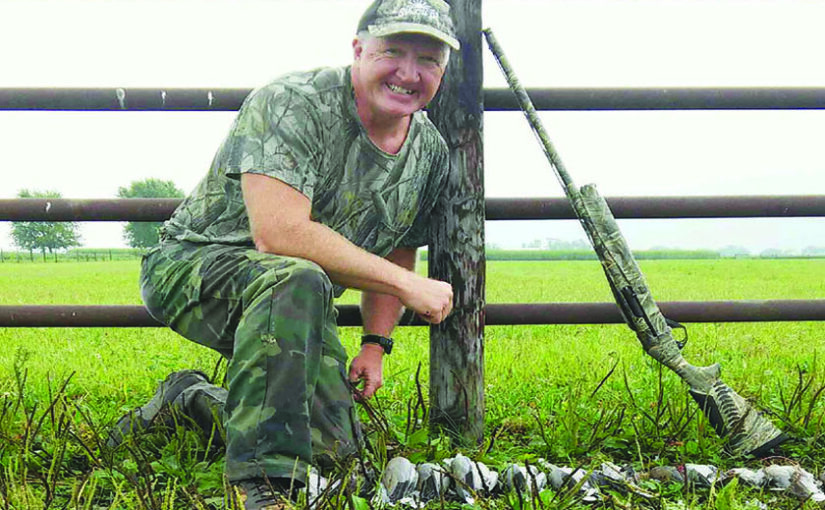 The excitement over the dove opener could barely be contained.  The prior drives through my hunting grounds revealed numerous power and fence lines weighed down by resting doves and the weather had held up to hopefully keeping the doves from moving further south!  Recently cut alfalfa fields kept the birds feeding locally and all was good.  The extreme fog encountered in the pre – sunrise drive to my hunting spot was thick.  Logic would indicate the doves would sit tight until the visibility improved and I expected a period of non-activity accordingly but patience has never been one of my strong points.  The neighboring farmhouse in the distance would drift in and out of the intense fog and the few flying targets would be past me before a shot could be accomplished!  The anxiety continued to build but eventually a few light blues holes in the fog overhead and slight wind increase bolstered my confidence the fog would soon dissipate!

The first shot was on a right to left bird following the north fence boundary.  The swing felt good and the charge felled the bird, the new Benelli had passed its’ initial indoctrination into dove hunting!  Unfortunately, the bird fell in the still growing, waist high bean field and with the moisture content clinging to the plant being excessive, it was as if retrieving a fallen duck in the pond with no waders!  After the needle in the haystack difficult but successful search – the shooting location was moved to avoid future ventures into the bean field!

The open pasture was almost void of any plant life over ankle deep, making the fallen doves much easier to find.  A pair approached from the east slowing as if to consider landing in the field in which I was standing.  The first shot knocked the target out with the remaining bird turning south offering a left to right shot that connected!  Was my new shotgun the miracle worker incapable of missing?  The sun began to shine through the low-lying cloud cover and again the blue areas in the overhead sky became larger and more numerous.

Staring into the rising sun now was difficult.  I felt like a P47 Thunderbolt pilot being under attack by a ME 109 Messerschmitt coming out of the sun being virtually blind to the path of the attacker!   Another victim succumbed to my shotgun with the tally four down on one double to boot – not a bad start!  This dove hunting is not as difficult as advertised with a seasoned hunter shooting the correct gun!  Be forewarned whenever you get this attitude you will be rudely corrected and like the stock market, every day is not going up!  My next four shots produced only empty hulls to be reloaded and the gnawing question of what is wrong!

With the sun now fully exposed and the fog gone, the walk into the field to retrieve fallen birds must have initiated a full attack by a flock of the Collared Dove species intent on invading this field!  Six shots connected making a limit a real possibility in the near future!  The sky was now blue with no clouds present.  With concentration on good shooting form and swing a limit was accomplished not with record success but with an acceptable ratio of hits over misses!

The activity of the day was a success and met all expectations felt on the drive in that morning.  The limit was achieved with two thirds of the bag belonging to the Collared Dove variety, a much higher percentage than experienced in the past.  The new Benelli met all expectations with any shortcomings probably attributed to operator error!  The question of whether the fifteen boxes of reloads would be enough for the remainder of the season began to creep into my worry zone.

This morning was a first with the thick fog to start, a smarter hunter would have stayed in bed and ventured forth after an extra cup of coffee but with the high level of anticipation brewing within my brain the field beckoned as if I were Captain Ahab in pursuit of the white whale!  By sheer will the thick fog was eventually overcome by the ever growing spots of blue heaven making for a very unique day in the outdoors producing a positive memory for this participant!