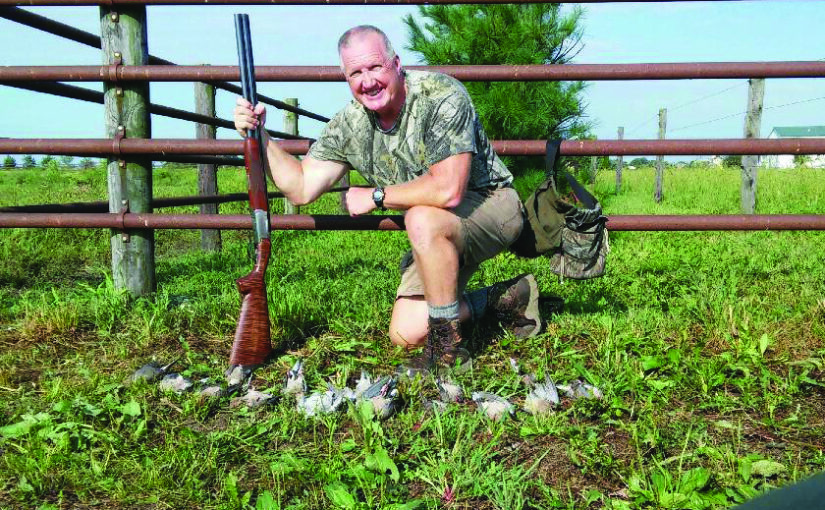 The weather forecast for this morning looked good.  The extreme heat had succumbed to a Northeastern cooler wind. The sunrise time was confirmed and although a few minutes after, ample light flooded the field, and a cloudless sky highlighted the flight pattern of this morning’s target.  Anticipation was rampant and although this area had provided positive hunts over the years – nothing is forever! My over and under shotgun was chosen for the hunt for consistency and high average shot to success ratio. Ammunition and components for my favorite load were difficult to obtain, good shooting is more a necessity than desire in this environment. My plan was to be stingy on shot selection and make every shot count!

The first four attempts did not connect; therefore, the plan was abandoned with concentration on my swing and follow through hoping to eliminate thinking about every shot!  After a few good shots my nerves settled and the number of birds in flight confirmed opportunities would come. I was quickly joined by Brandon Schrock for this mornings’ hunt for at least until his time to exit for school attendance. His first shot was successful, and the fun of dove hunting was upon us!  The recently cut alfalfa field was attracting song bird, doves and predatory fliers making for a constant scene of motion in the skies.

This opening day hunt was everything one could hope for, and I was grateful for the opportunity to hunt this farm.  Remembering the not so perfect dove hunts of the past where shots were far and few between or at almost unhittable targets flying at supersonic speeds made this experience all the more satisfying.  After Brandon had left for school, the field was mine alone and after a short time, the limit was accomplished.  My shooting was slightly less than desired but still within my “good” designation.

Being able to hunt an area where all the right factors were present without any type of intervention such as a sunflower patch, the use of electronic aids such as motion decoys or any other intentional farming practice was unneeded.  Although the natural progression of ageing was upon me – today my eyesight, reflexes and coordination were ample for success!  Many who have hunted these very fields are unable to participate in the sport they loved for these and health reasons.  One day this may be my fate but hopefully far into the future.

Watching Brandon handle his twenty-gauge autoloader in a safe and courteous manner was comforting and to see his success continue to escalate after a short time confirmed he had listened to my instructions on proper swing and follow through on these difficult targets.  Brandon switched to my old Benelli Super Black Eagle with modified choke installed to even greater shooting success than with the twenty!

After my short drive home, and the cleaning of my doves, the adrenaline had worn off and the tiredness from lack of sleep and old age was reminding me of my station in life.  Time has traveled quickly as it seems like only yesterday, we were starting the 2020 Season!  The humming locusts, Canada Geese communicating as they exited their overnight areas, and the slight chill in the morning air and building flocks of migrating birds – all providing evidence of the seasonal  change coming.

Watching Brandon handle the shotgun with safety in mind, doggedly searching for a downed bird in the elusive alfalfa patch and making a long shot were more satisfying than my success in the field and more importantly watching his successful transition to a respectful hunting ethos confirmed he was well on his way to becoming a seasoned hunter.  He has inquired as to being able to experience the Spring Turkey Season and possible forays into the Duck Blind as well!  With his parents blessing these things may be possible.

Wondering what will become of my treasured friends included in my firearm collection may be answered as they possibly transition to a new owner that will cherish and respect their history as I do is my desire.  The treasured memories of the few hunts experienced with my father and grandfather many years ago are etched in my mind as well as bluing of many of these firearms.  As “young turns to old”, a new participant in the cycle emerges hopefully his memory will recall his first experiences afield and those who introduced them to him.