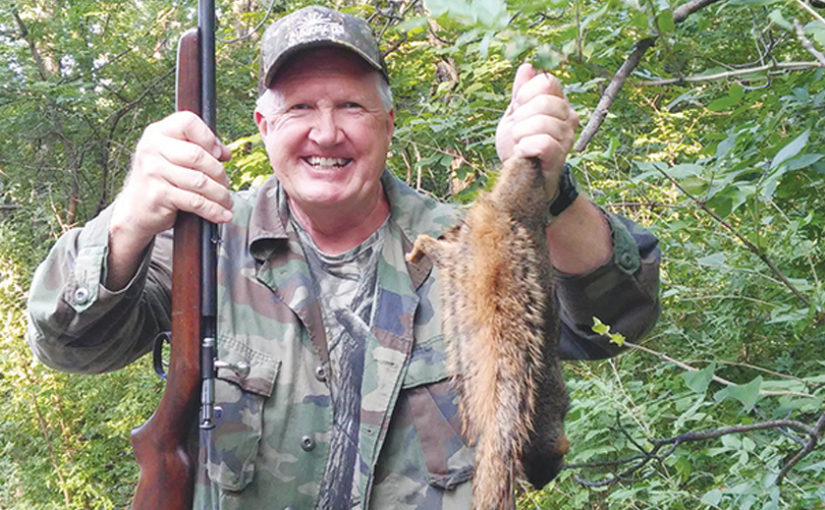 The morning light was not yet visible as I contemplated my morning’s mission.  The temperature and wind were perfect for entry into the woods plus the earlier rains would allow noiseless movement, a perfect morning to hunt squirrels. The same internal desire experienced from my youth to go squirrel hunting was driving me!

The gun safe was opened after serious memory recollection for the combination.  Although earlier this year, a scope was affixed to our old but unused Marlin Bolt Action 22 rifle and I wanted this firearm to lose its’ virginity in the squirrel woods but I grabbed my Grandfathers old single shot Winchester with iron sights instead!  With my poor eyesight and iron sights, the challenge was on. When but six years old while visiting my Grandpa in Missouri where he worked as a caretaker at a large estate, he took me along into the woods while he carried this rifle to potentially shoot a squirrel.  I vividly remember this adventure to this day and am proud to carry his gun afield.

Grandpa was a coal miner in the hills of Muhlenberg County Kentucky.  My mother was born in the coal mining town of Revere, now non-existent as the underground coal mines and supporting towns are long gone!  He later moved his family to Indiana, to find work in the War factories to escape the coal miners’ existence. Grandpa used to tell me that poor people often have poor ways.  I vowed to eliminate the poor ways he spoke of and hope my calling would more profitable!

His Winchester Model 67A is a joy to carry and shoot.  The full stock and chrome bolt action gives one the feel of shooting a real gun and the trigger is perfect!  Once a year, the gun is pulled from the safe and given a thorough examination and cleaning as it represents one of the few mementoes of a man’s life and I am proud to possess it!  Although, I have shot game with it in the past, several years have passed since usage.  One wishes the firearm could talk as it would reveal the joys and frustrations of a young man hunting in the woods!  I would trade all of my finer firearms just to experience the past held in this old Winchester!

Although no tree action from squirrel activity was noticed, suddenly a doe broke from her bed and snorted several times eliciting her yearling to follow her in escape.   Off in the distance, the bark of a Fox Squirrel broke the morning silence.  Just the break needed!  The cuttings on the ground confirmed the location of the first maturing Hickory nuts of the season present in the woods.  Soon the raining nut fragments pointed to the critter overhead.

My eyesight was less than desired but the Squirrel sat on a limb feasting on a nut giving an alluring target.  I did my best but missed! The crack froze the squirrel momentarily but soon he resumed feeding.   A slow motion reload was accomplished while waiting for a better opportunity.  Shortly thereafter, he moved down the trunk to seek the mature nuts giving a better and closer shot choice.  This one succeeded and my first squirrel of the season was had!

I felt the success of the hunt recalling my times of youth through adulthood and the enjoyment the sights and sounds of the woods offered.  To bridge the time from present to past, the venerable old Winchester brought a tear to my eye.  My hunt today was over.

If only Orville Ferguson, my Grandpa, could see me now!  His humble beginnings and hardscrabble life provided the experiences behind his sage advice.  His advice is now bearing fruit with this hunter.  His instruction to work hard and seek better ways has worked but I remain forever thankful for my past and this old Winchester will stand as a reminder for my lifetime!