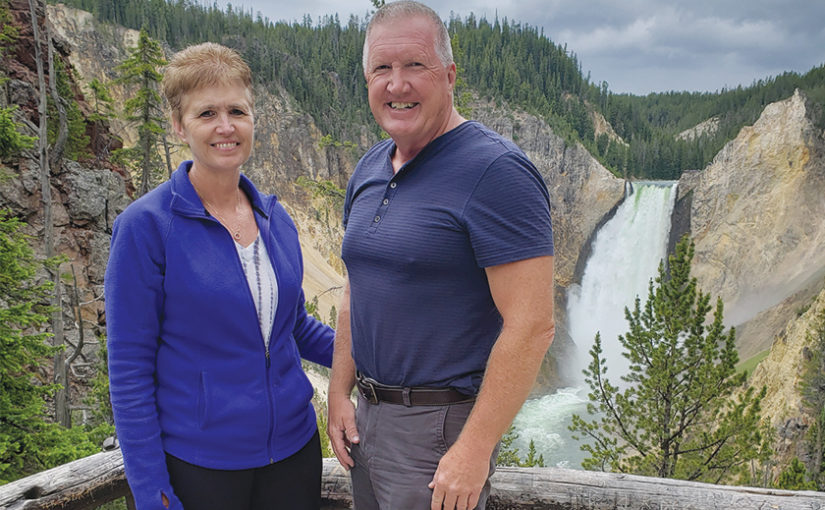 After reading and peering at the photographs within the book of our National Parks, countless hours were spent dreaming of riding Angel, my Pony, over the vast Rocky Mountain range interspersed with steep valleys, wooded creek drainages and immense open space as a child. Now, minus the Pony, the dream was being realized only on foot by leaving a parking area near the trailhead designated for tourists.  Not quite the fantasy of my childhood dreams but spectacular just the same.  My cowboy skill has faded quite perceptively anyway, and the probable problems resulting from falling from the saddle have tempered my desire to ride the range – so hiking was the best alternative.

My spouse Kelleye, a veteran hiker with a picture perfect heart could slow her pace to let me keep up and many of the trails in the Park called Yellowstone were listed as moderately strenuous but were death defying as compared to our flat land versions in the Midwest!

Being the skeptical consumer, Bear Spray seemed a quick way to separate a tourists’ money from their pocket and I was too smart for that!  As we parked our vehicle in the designated area, we noticed our nearest neighbor had erected a tripod and was spying on the hillside with his Swarovski spotting scope.   I knew a rifle scope from the same manufacturer was out of my price range so it was obvious he was serious.   A conversation was initiated with this individual by the name of Reve Carberry.  Both he and his wife, Susan, both retired, spend six months of the year watching and photographing the wildlife of the park.    He welcomed us to peer through the scope to our desire.  He said the scope was presently directed toward a pair of wolves on the distant hillside!  Wolves!  Sure enough, two wolves were within the viewfinder obviously unaware they were being watched as the distance was over three miles between us!  Reve told us they have been watching a family group of wolves with four pups for most of the year.

His expertise on the action within the park kept us mesmerized!  The Grizzlies are rarely sighted as they disdain human contact and usually stay in the upper elevations of the park, he informed us.  He produced a recent video with a pack of wolves feeding on the carcass of a recently killed Buffalo only to be interrupted by a mother Grizz and her two cubs!  The wolf group was evidently familiar with challenging a full grown bear and gave ground to the bears!  The wolves lingered and would take quick forays to the carcass to steal another bite but the Momma Grizz would tire of their intrusions and would run them off with a quick and usually short charge!  There was no income or food redistribution plan as touted by liberals in this environment!  Fortunately, it appeared that all were well fed but the wolves were quick to give ground when pressed!  This encounter with Reve made the trip to the park very spectacular.  He wore a pepper spray canister on his belt and suggested we do the same while in the park.  My belief in marketing ploys of the product had been dispelled with the advice from this expert!

On the next path above Yellowstone Lake, the warning posters nailed to the trailside trees warning of recent bear encounters had much more meaning!    The claw marks on a nearby tree at about eight foot elevation reinforced the warning posters’ message.  Fresh bear scat along the trail and being totally alone in this vast region confirms one is no longer the dominant species.  Were we being watched – probably but hopefully just that!  Suddenly, getting back to the parking area was more eventful.

After hiking the trail toward our Ribbon Lake destination, we encountered a meadow with five feeding Bison.  One of the mighty beasts was directly on our intended path.  Surely, he would let us pass without incident but we would be well under the two bus length minimum distance between us suggested by the rangers to do so!  After all he probably encounters tourists every day!  I remembered my conversation with the park ranger the previous day – he was with a group of tourists taking photographs of a resting Buff.  The beast was lying almost comatose so near a gurgling steam emitting mud volcano cauldron it was a wonder he was not being cooked alive!  I asked the Ranger the need of his presence?  He informed me that eventually the old Bull would move after his Arthritic Treatment near the steam was completed and therein the problem.   He will go wherever he wants and if desired he will simply jump the elevated platform the tourists were standing on to vacate!  He said the Buff can jump six feet from a standing position and much higher when in motion!  In four bounds he will reach thirty-five miles per hour in speed!  Hence the need for his presence to warn the naïve tourists of the peril!  Suddenly, being in an open meadow staring at a feeding Buffalo on the trail, my own invincibility was exposed.  We elected to give ground and retreat to our starting point on the trail without completion of the hike!

The spectacular views, all manner of wildlife and fowl along with the opportunity to see a place where nature still operates within a wild and natural order in this park called Yellowstone will always resonate with me, my childhood dreams complete!  Next visit I will buy “Bear Spray.”  I am afraid Kelleye can now outrun me in a race!