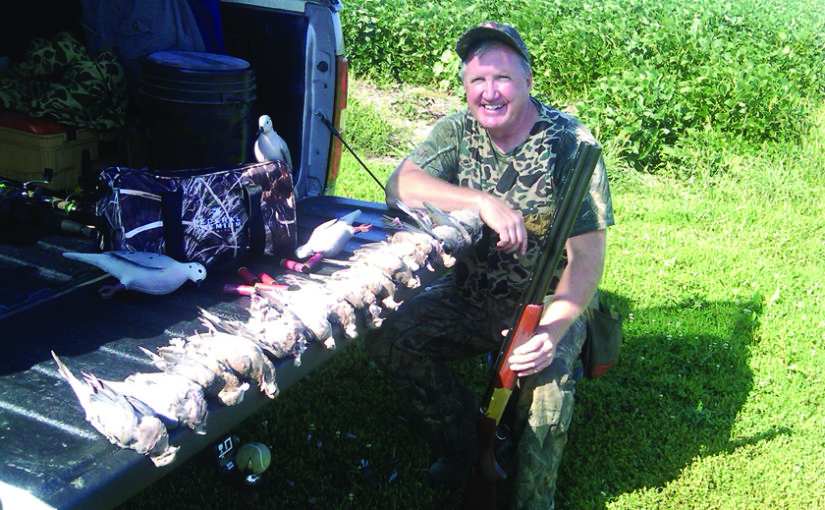 The walk into the area heavily forested by mature Hickory trees was long and arduous.  The target locale harbored this species of tree, hopefully, now beginning to mature of nut making the squirrels seek out and cut on the ripening fruit.  This trip was to be very stressful as the temperature was already hot and the winds well above the optimum for the easy identification of traveling or feeding bushytails.  Already nursing a sore big toe derived from hiking the mountain meadows and valleys and to a lesser degree the higher elevations on the Logan Pass in Glacier National Park only two weeks ago, this morning the walk would be a short one!  I donned the Army surplus pants and light jacket of the woodland camo variety.  This outfit was purchased in 1983 from a retired Army Supply Sargent, “Sarge Bob Eveland” operating an Army Surplus store from his garage!  His product has held up well.

My single shot bolt action Winchester, my grandfather, Orville Ferguson, old rifle passed on to me after his death was left behind as my failing eyesight and hearing would give the squirrels enough of an advantage this morning.   Instead, the Ruger 1022 mounted with scope was to be the weapon of choice for this hunt.  As a young boy, I would compete with our neighbor, Brian Mossberger, in the procurement of squirrels in our southern Indiana home local woodlots.  His rifle was the Ruger 1022 and mine, the Remington 552 Speedmaster.  After all of these years, I must admit the Ruger was the better choice.  Presently the Ruger is my gun of choice for serious squirrel hunting.  Brian went on to become a paratrooper in the 101st Airborne and one tough hombre!   If ever attacked by a group of thugs in a dark alley, Brian would be my choice to stand with me and heaven help the assailants!

Although never done before, the choice was made to forego my jacket and go into the woods wearing only a camo T Shirt.  Bug spray was applied generously to offset the exposed arms.  During my jaunt into the woods, the distant sound of the passing train going over the Findlay Railroad Bridge on Lake Shelbyville caught my attention.  This same sound was heard on my first duck hunting trip on the lake over thirty-five years ago!   Daylight now flooded the woods and the trees swaying in the wind did not foretell of prime conditions!  A quick glance to my left arm revealed a sight from a horror movie genre!  My arm had been cut either by Bush Honeysuckle Limb or Briars and was bleeding as if fatal!  After using some hickory tree leaves to wipe the blood from my arm, the wound was less onerous than imagined and was only magnified by the bleeding as a result of the blood thinners taken to aid my heart!

Once, at my intended destination, activity was immediately noticed but with poor eyesight and an overly leafy canopy overhead, a shot did not come quickly.  Finally, after what seemed like an eternity a squirrel presented a clear shot and the sound of the shot startled me on the trigger squeeze!  After a moment in time, the target fell with a thud – head shot!  Although soaking in sweat and feeling hungry at least the thought of being skunked was erased. Although numerous squirrels came and went working the first ripening trees in the woods my “old man reflexes” could not keep pace!  Experience told me to sit tight and let the critters come to me rather than chase fleeing gray maybes but being slow on locating the feeding and even worse on getting on target, the morning slipped away!  Finally, a feeding fox squirrel made enough of a mistake to give me a shot and he never heard the report of the rifle!  Although I am sure if I had elected to wait them out for a longer period of time, a limit could have been had, but this was not my priority.

A ritual of the fall was accomplished, as I had entered the woods as done many years ago in my childhood, and many years since, in anticipation of the hunt.  Old memories were rekindled from those years past and the walk back to my vehicle was taken slowly and deliberately.  The rumbling of another freight train filled the air over the lake!