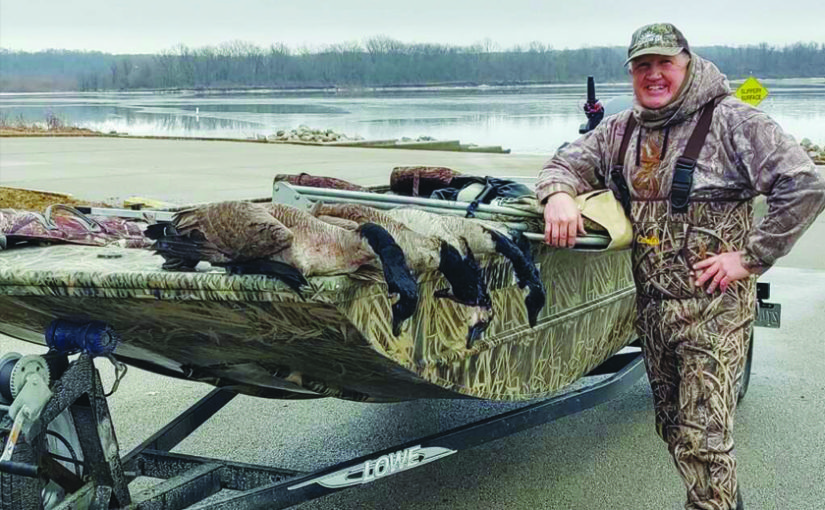 My old Benelli shotgun had been cleaned and stored away, only to be removed in the event no other option was available!  In its’ place, my new Benelli Super Black Eagle III was in the blind ready to begin a new era of successful shotguns used by yours truly!  The first time out with the original Benelli was the Season opener in 1992.  A Canada goose was the first victim and a banded green head was the second, not a bad start for a new gun, my expectation was for the same luck with my new prize.  Unfortunately, a fresh box of Federal Black Cloud ammunition had been expended with nary a feather to show for my shooting prowess!  Not to accept defeat, the sky was willing to accept all of the holes shot into it as I continued my assault!

What is the problem? My follow through was non-existent and those geese are traveling faster than you think.  Yes, the swing through preferred manner of aiming was inadvertently being replaced by a sustained lead practice with no follow through even in that!  After much thought and personal analysis – it was decided to concentrate harder on my swing and to keep my left eye closed during the swing.  A gun jam after the next pair of decoying Canada Geese after the first shot left me just about willing to wrap this firearm around a tree!

Earlier, hunting with Jeff (JJ) Sykes on a day where the Specklebellies drove us crazy for most of the day by feigning their approach with a classic tip, sail and ultimate wave off at one hundred yards or so!  JJ was able to take his limit with some classic shooting while I only scared the birds with my shots!

During the next series of hunts, I was comforted by watching my hunting partners successfully downing geese right and left, only making the burning sensation in my gut only worse.  Everyone knows when you are thinking about what should be done to improve your shooting – it will only get worse and I was in a funk!

With only a few days left in the Goose season here in Illinois – the decision was made to keep fighting and at least give it my best until forced to give up!  Landing a hunt with Bill Pinkeston, an old work associate, with a super rig lifted my spirits as a limit was had counting the bird which had sailed over the island and could not be found.  When JJ joined with up for the next series of hunts, more success came but truthfully, Bill and JJ were doing the lion’s share of the successful shooting!

With only the afternoon left between the open and soon to be closed Goose Season, while hunting from a goose pit set up.  The torture would soon be over with the off season left to lick my wounds and prepare for better days.  Suddenly, a group of Canada Geese swooped in from the Northwest – low but set.  Although the group did not completely buy the program their swing put them in range and being this was the last day – we rose to the occasion and fired.  JJ’s shell primer did not ignite therefore denying him even one shot! My swing was good, and l felt positive as the bird folded out of formation and hit the ground like a stone.  Never had a shot been more therapeutic, it was if I had hit the winning put at the Masters!  Feeling like a million bucks over the one downed bird restored my confidence and once again looking toward the future!

Only a waterfowler can identify with my malady on shooting success but like a less than spectacular golfer or a baseball player in a slump, one success will bring one out of their funk and create a positive memory to carry into the future!  As usual, my shooting woes were not due to my new gun but plain old operator error!

What is this upcoming Snow Goose season about?