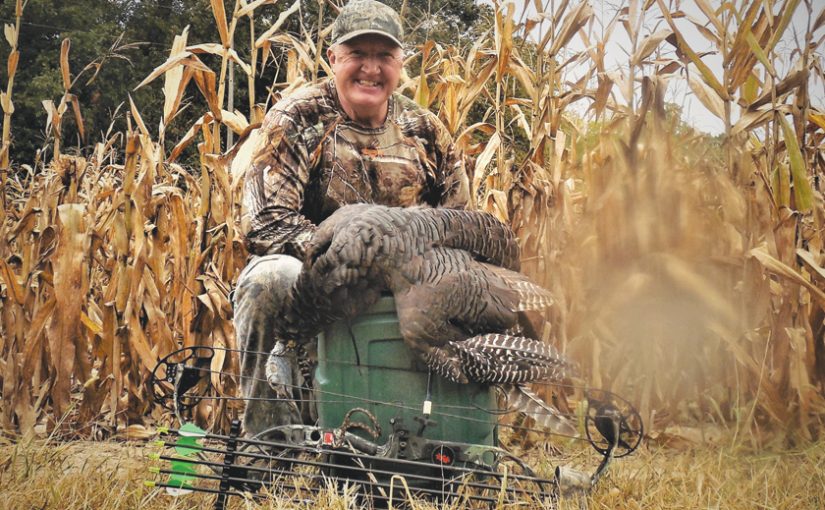 The wind from the east/southeast put my stand selection to the test but knowing this ridge running due north was filled with White Oak Trees with the best exposure to the rising sun would produce a crop of acorns much to the Whitetails liking was my best choice!  My tradition of hunting this farm on my first hunt in honor of my late father would also be fulfilled.  Within moments of sufficient daylight to discern the shape of the deer against the dry understory a group of bucks appeared moving north but using the western edge of the ridge with the wind at their advantage.  Although the largest animal worked the area as if the monarch of the woods, he probably was only two years of age.  His degree of caution would guarantee a good chance of survival throughout the season and more!  Participating in the deer season opening day is a must and my selection of stand sites was proving fruitful.

In total, seventeen deer were identified from my position with numerous shot opportunities throughout the morning boosting my confidence in the strength of the local deer population.  Not willing to overhunt this location by a return trip the following morning with the same wind direction, I chose a strong travel corridor to hunt but no deer were seen the next hunt day!  Turkeys were present the first two hunt days but although close, no shot opportunities came.  Did they pinpoint my location from a distance in the dry environment?  Turkey shot opportunities usually present themselves in the early season before the leaves drop.  I kept silent as I have found competing with the old boss hen and her assembly call to the juvenile flock is difficult, hoping for their line of travel to intersect my location was the better choice!  A vocal young Jake would be another matter!

For the next morning, a cut where three fields converged was chosen with my climber utilized about ten yards within the bordering woodlot.  Fully expecting to see more turkeys from this location than deer was not all bad.  The trees still harbored most of their leaves giving excellent concealment to my position.   The overcast warm morning was producing more mosquitoes than deer sightings but my chances were good as the standing corn served to isolate this area making the deer and turkeys comfortable.

A doe approached from the Northwest with the intent of passing through the cut between fields.  Here she caught notice of my scent as she was directly downwind – all became nervous.  She and the youngsters finally passed but hurried their pace to vacate the area!  I could hear the assembly call from the hen off to the Southeast.   Finally two birds appeared in the field feeding in the warm grasses keeping their distance from the tree line for safety.  They suddenly split for cover probably following the rest of the flock I could not see.

Suddenly, at one hundred and fifty yards distance, due north a flock of birds approached.  Glad the turkeys do not possess the same sense of smell of the whitetail made my possibility of success much better.  They closed to about seventy five yards before veering toward the south west after working a patch of heavier weeds.  They walked around the tree line and out of my sight – more bad luck.  But the flock reversed direction and walked towards me and my cut just along the woods edge which was perfect!   I shifted my feet for position and used the upper limb and wheel of my bow to shield my open face being careful to not move or flash my face!  As they closed to within forty yards they veered back into the open field crossing diagonally to my position thirty yards at closest point.  My draw did not spook the flock but waiting on the bearded bird to present a clear shot as they moved was not working perfectly and within seconds my possible shot became more tenuous and as they walked away the distance was too great on a moving target for me to take!  Why does this always happen to me?  Was my action too conservative?  Shooting a turkey will have to wait for another day, I thought.

The turkey sounds emanating from the East suddenly caught my attention and two birds were hurriedly approaching my location to walk through the cut to catch up to their buddies now vacating the area.  This was more good luck than I have experienced lately and my footwork shifted to make the shot as the situation developed.  Better yet!  The second bird was bearded!  I waited and drew holding until he stopped and although further than I desired, he was within my proficiency zone and the arrow was off.  The reward was immediate as the distinct sound of feathers being cut was evident!  The bird jumped and flew directly upon his companion sensing he was being attacked and wanting to exact revenge!  Within seconds he collapsed and flapped his last!  His companion lingered a few moments before retreating to the flock to the north.  Thankful for the good fortune in turkey action, a good release and shot and quick ending, I climbed down and paced the shot at about thirty yards.

Truthfully, a turkey shot in the open in their environment is often tougher than that of taking a whitetail.  My string of successful years shooting turkeys with the bow will continue for at least another.  Hunting the winged deer will always be one of my favorite activities.