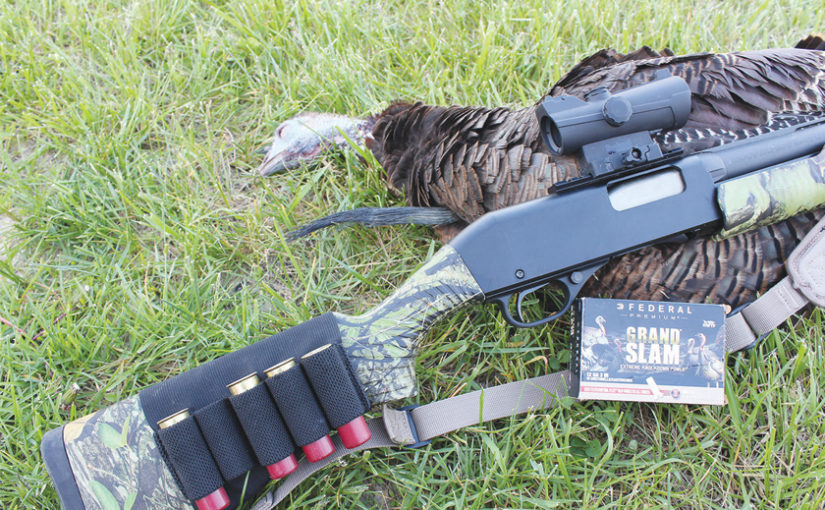 The Perfect Shotgun for Turkey Hunting

When it comes to the perfect shotgun for turkey hunting, what is the No. 1 thing that matters most to you?  The opinion of most turkey hunters would be to choose a gun with good optics that shoots a tight shot pattern.

Many optic companies offer scopes for the shotgunner.  I recommend a scope that provides at least 3 ¼-inches of practical eye-relief, preferably 3 ½ inches.  For those of you who do not know what practical eye-relief is, it is the distance between your eye and the scope.  Low-power shotgun scopes are parallax free at 50 to 75 yards for close shooting.  Be sure to purchase a scope specifically designed for a shotgun.  You need a scope that can withstand the big bang punishment that a shotgun delivers.  Scopes designed for rifles are not up for the challenge.

A scope’s magnification at the three power allows you to get a good look at the gobbler, and it allows you to see any obstacles in the way that could prevent you from getting a clean shot at a turkey’s head.  When it comes to accuracy, low magnification scopes is the better choice of other forms of sights on the market for the turkey hunter.

In the beginning, the only options turkey hunters had available to choose from were the Improved Cylinder, Modified, and Full Chokes.  At the time, we made do with what we had, but as turkey hunting has grown in popularity, we started seeing Extra-Full and Turkey-Full chokes.  With these specialty chokes becoming all the rage, would one work with your gun and load?

To understand shot patterns better, we first need to know how a choke does its job.  The first thing that happens is that the shot moves from the chamber where the shell is held and into the barrel.  This is accomplished by traveling through a short taper called a forcing cone.  As the shot passes through the barrel, it will enter the choke, which is the last thing it does before leaving the gun.  The reason the barrel is shaped like a perfect tube is to prevent disturbance in the shot column.  When the shot enters the choke, the choke will crowd the edges of the shot column inward to tighten the shot pattern.

Chokes can present problems if they are too tight.  An example would be pellets pushing against each other.  The result of this happening is a pattern that will have holes throughout it instead of a nice, tight pattern.  It is possible that hunters will have an irregular pattern with some loads and not with others.  It may occur with every shot or just occasionally.  You will never know for sure when it will happen.  The good news is that there is a simple remedy: shot size.

Hunters will begin to see irregular shot patterns with a large shot like a number 4 and other large pellets.  A choke that delivers a tight pattern with the smaller number 6 might have problems with the bigger number 4 in the way of leaving holes in the shot pattern.  Large shot might even damage the choke itself.  There is no room in my turkey-hunting arsenal for a number 4 shell, and I recommend that all turkey hunters stay away from the 4 shot.  I am not trying to make anyone mad; all I am doing is stating my preference.

Hopefully, turkeys will get to within 20 yards for the perfect shot, but when they do not cooperate, you will need to have a gun and a load that will reach out and deliver a punch with a tight pattern.  Let’s face it, turkeys do not know what we as hunters expect from them, so we must be ready for anything.

After you have your shot pattern to a point where you can no longer complain about it (correct choke and shot size), there are still other factors that will make an individual turkey gun comfortable to hunt.  Autoloaders, pump, single, and double barrels are the choices of actions from which turkey hunters must choose.  It mainly depends on what you have grown accustomed to over the years.

Autoloaders is the first choice among many turkey hunters despite being more costly than other actions.  With more and more turkey hunters shooting heavier loads, autoloaders are popular for being able to minimize a lot of the recoil.  Chances are that hunters will not get a second shot at a turkey, although it does happen.  Whatever happens, it is nice to know that you will have a gun ready to fire.

For hunters who hunt other game with a pump-action shotgun, it is a popular choice among turkey hunters.  I have used a pump my entire hunting career, and it has become second nature for me to eject a shell from the chamber. Often, I do it without realizing I did it.

The last couple of seasons the Savage 320 Field Grade Turkey Gun has been my go-to shotgun.  It is an affordable shotgun with the turkey hunter in mind.  The gun features Mossy Oak® Obsession camouflage, an extended full choke, fiber optic sight, and drilled and tapped receiver.  When combined when any of the Federal turkey loads it is a deadly combination.  I have found that either Federal’s Grand Slam or TSS shoots best but as always, you need to pattern your gun to find the best shell for you.

I have found that either Federal’s Grand Slam or TSS shoots best but as always, you need to pattern your gun to find the best shell for you.

A double-barrel shotgun will allow a hunter to use two different loads, depending on the shot distance.  In one barrel, you can have a load that will hold a tight pattern for long shots and an open pattern in the second chamber for shorter shots.  Simply use the barrel selector to choose the desired load, aim, and fire.

Single barrels are usually inexpensive compared to other actions and lighter, too.  A hunter will only have one shot, but how often does a turkey hang around after you shoot?  An easy fix is not to miss the bird the first time you shoot.

A 12-gauge that is chambered for a 3-inch case is all the more that you need to kill a turkey.  The 3 ½-inch casings came out because there is no room for lighter steel in the smaller 3-inch shell to give maximum performance.

Most of the top shotgun makers offer specialized turkey guns.  If you are loyal to one brand, chances are that you can find a gun to suit your needs.  Of course, it will not hurt a thing to shop around a bit. Have a shotgun that you are comfortable shooting, a load that shoots a deadly pattern, and a sight that you feel will allow you to consistently hit the head of a boss gobbler.  Put these three things together and you have a deadly trio.