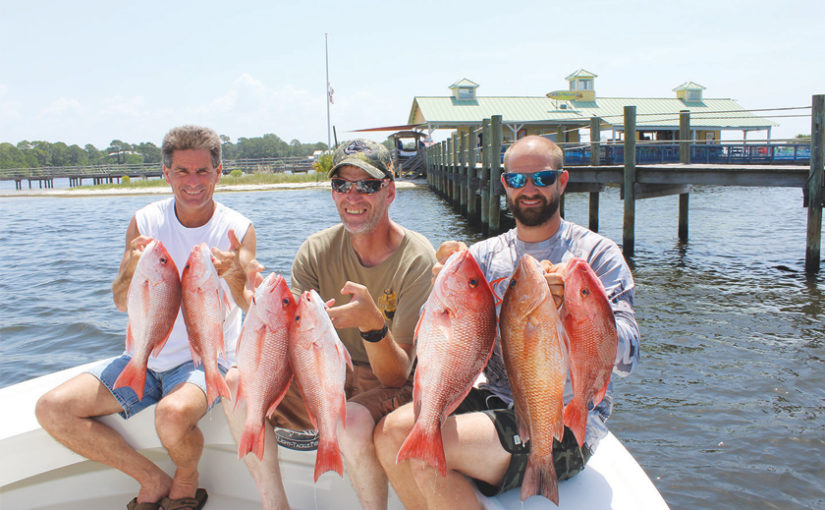 Being from Illinois most of our fishing is reserved for farm ponds, small rivers and the occasional lake. Bass, bluegill and catfish are the main targets so when I was invited to head down to Panama City Beach to experience offshore fishing, I jumped at it.  It was possible that we would catch just about anything, but Red Snapper were our targets.

Arriving in Panama City Beach, my family along with a couple friends checked in to our resort, The Sheraton Bay Point Resort, then took in some of the sights and great food before calling it an early night in preparation for what we hoped would be an amazing time on the water bright and early the next morning.

Six o’clock the following day found us on the piers of Sun Harbor Marina meeting our captain Justin Leake of Panama City Inshore.  Justin is known as one of the top fishing guides in the area and he is also the host of Chasin the Sun TV on the Discovery Channel.

After quick introductions we were loaded in the boat and headed to catch some small fish called Pogies that we would later use for chumming and bait.  A couple throws of the throw net had more bait then we would need and we began the 3-mile ride to one of Justin’s Red Snapper grounds.  This experience in itself was something new to us Midwesterners.

After a quick lesson on how we should hook the bait and hearing the simple technique we would use to catch fish of allowing the bait to drop to the to the bottom and waiting for a bite we ready to begin catching fish.  And, it didn’t take long.

Within seconds the first fish was hooked, a Trigger fish.  Unfortunately, these fish were not in season and it was quickly released.  In the next few minutes we caught several Trigger fish and Gag Grouper.

It didn’t take long though before the first snapper was in the boat and measured 18-inches.  The minimum length is 16-inches, but only a handful of the fish we caught were smaller than that.  Over the course of the next 90 minutes we caught several fish, releasing the ones that didn’t meet the minimum requirements and fish not yet in season.

I would like to say that we fished all morning catching fish after fish, but I can’t.  The reason I can’t say that is that within those 90 minutes we had our limit of Red Snappers.  We accomplished what we set out to do so we pulled anchor and went to a shipwreck. The “Liberty” had purposely been sunk decades before and was home now to all sorts of fish species.

Justin was hoping that we could hook into one of the giant Amberjacks that calls the wreck home.  But, it was not meant to be.  We did catch a few more red snappers that we had to release though because our limit was already met.  Running short on time we decided to call it a day, satisfied with what we had done.

Returning to the piers we cleaned our fish and headed back to the resort to meet up with the ladies who chose not to fish with us that morning.  I hated to tell them the action they missed out on, but enthusiasm would not allow me to be quiet.

What we experienced offshore fishing was something we will never forget.  I envy those that have the opportunity to do it on a regular basis.  I had always thought of Panama City Beach as a spring break destination but it is so much more.  Exceptional fishing, great food, world class golf courses and so much more await you in Panama City Beach.

Editor’s Note: For more information about fishing with Justin Leake visit his website, www.panamacityinshore.com.  To book your stay at the Sheraton Bay Point Resort visit