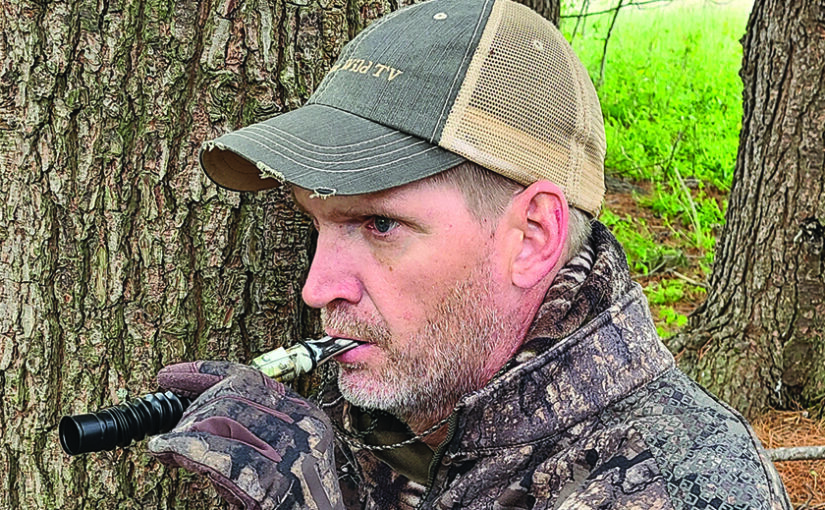 November of 2020 found me sitting in a ground blind in south Texas.  After a couple of days of seeing deer just out of shooting range for my Xpedition crossbow I was getting a little impatient as buck after buck cruised on past,

With many tricks up my sleeve, I decided on the last day it was time to get aggressive if I didn’t want to leave empty-handed.

Loading my gear in my pack I headed off to the blind.  But this time I made sure to have my rattling antlers and my Hands-Free Grunter with me.  Again, several bucks cruised just out of range, but none were “shooters” on this highly managed ranch.

Then out of nowhere in the distance, a big 6-pointer the ranch manager wanted shot made an appearance about 150 yards out scent checking the area for does.

I lightly touched the tips of the antlers to one another.  Just enough to pique his curiosity.  Then I turned my doe bleat can call over a couple times and blew simultaneously with my Hand-Free Grunter duplicating the sound of a tending grunt.

This was all the buck could handle and he made a b-line to my location.  Stopping at a mere 22-yards he turned broadside one last time.  At that very instant I pulled the trigger and sent my Carbon Express downrange.

Immediately I could see the results of the arrow’s trajectory as bright red blood exited the deer from right behind the front shoulder.  After a few minutes, I exited the blind and picked up the blood trail.  60-yards later I turned the corner to find the buck piled up in some brush.

I went into this hunt believing the deer would come to me but as hunters we know that isn’t always the case and sometimes, we must cause the deer to want to come to us.

I believe that if I had not changed my tactics that last day, I would not have been able to harvest a deer.  There are many tactics a hunter can use to be aggressive rather than passive and none are better than coaxing a buck in during the rut phases through sound.

This hunt was textbook as far as calling and having a buck respond goes but it hasn’t always been that way and there will still be times it doesn’t work as planned.  My first experiences were not what I hoped for many years ago when I first started using calls.  I spooked deer with my calling, some deer ignored me and eventually I started seeing results.  If I would have stopped after my first few tries at attempting to call a buck in for a shot, I would have missed some great opportunities.  Over the years I have gotten better and have learnt a few things.  That it is not to say though that calling works every time because it doesn’t, but it sure helps.

Effectively calling deer is not as hard as you might think.  Deer are very curious by nature, especially the younger bucks.  Yearling bucks are quickly kicked out of their birth area to cut down on inter-breeding. So, usually the basket racked 6-pointer you spot is new to the area.  Just like a new student at a new school, he is looking to make friends quickly.  So, anything that resembles another deer will pique his curiosity.

You are likely to run into a little more difficulty trying to coax a mature buck in with a grunt call and nothing else.  When a buck is actively searching for does during the pre-rut and peak rut phases of the rut will provide the best times to call a buck in.  A doe bleat call often works well getting his attention when on the hunt for does to breed.

Deer do not like to be alone.  Does are often called in just because they want company.  This is also true with younger bucks.

Not all deer will respond to your calling in the same way.  It is not uncommon for some deer to act as if they never even heard your call, even though you know that they had to hear it.  You will notice deer at very close distances not even raise their head up when you call and have deer several hundred yards come in on a dead run after you call.  It all depends on what kind of mood they are in at that time.

On the other hand, some deer will high tail it out of the area as soon as you call.  This is especially true with smaller bucks and does.  This normally happens when a little buck is afraid of getting in a fight with a more mature buck, or when a doe is not ready to breed yet.

There are some differences between calling young bucks and big, old mature bucks.  Young bucks are quick to make decisions because they do not know any better.  Much like a young boy who is always into everything as a child.

In most instances, young bucks will come in straight from where they heard you calling.  There are times that they do not even take the wind in to consideration and will come in with it making it impossible for them to smell the hunter.

The chances of a big buck coming in the same manner are not likely to happen.  Very seldom, if ever, will a buck approach from upwind of where the call came from.  A buck will always make a point to circle to come from downwind especially if he cannot see the deer who grunted.

What many hunters have trouble with is how loud to call.  It all depends on the situation.  High winds or heavy rain plays games with a deer’s hearing so calling needs to be a little louder so they can hear it and know where it is coming from.

With that being said, deer normally do not have a hard time hearing a soft call.  Some hunters believe the softer the call, the better.  I play it by ear and use what I have heard actual bucks do when deciding how loud to call in that situation.

What many hunters don’t realize is that there are different buck grunts, and they all mean something to other deer that hear them.

The last couple years have been using the Hands-Free Grunter from Bossman Outdoors.  This call can either be used as a hands-free call or in the traditional way.  However you decide to use the call, it can quickly be changed between fawn bleat, doe bleat, buck grunt and dominant buck grunt.  Basically, you have four calls in one depending on the situation.

A walking grunt or contact grunt is not an aggressive call.  It is basically letting other deer know “I am here”.  This type of grunt is often just a single “urp” from your grunt call.  I prefer this call early in the season when the buck is just out of shooting range.

A tending grunt is more pronounced and noticeably louder than a walking grunt.  This type of grunt is made when a buck is on the scent of a hot doe that might only be minutes ahead of him.  It is the same sound of a walking grunt but done several times.  It should sound like “urp, urp, urp, urp, urp”.  A buck hearing this is likely to make his way over, looking for the doe in the area.  This is a great sound for the chasing and seeking phases of the rut.

Another type of grunt that can be extremely loud and constant is made when a buck is chasing a doe that he has in his sights and he trying to get her to stop so he can breed her.  If a hunter reproduces this sound at the right time, and can pull a buck in.

The reason I like this hand-free approach is that my hands are either on my bow or gun and at the ready.  Sometimes you might just have a split second to shoot, and I would much rather not be fumbling with a call or making a lot of movement when a deer is in the area trying to figure out where the other deer is.

Another reason I like this hands-free call is that it allows me to use another call such as a can call or rattling antlers at the same time.  This gives a more realistic scenario to other deer.

I use a louder doe bleat to attract a buck that might be in the area, then I switch to a grunt when I have located a buck worth shooting.

If you really want to get aggressive, nothing is more aggressive than the snort wheeze.  This call can be duplicated using a snort wheeze call or some hunters have mastered it using just their mouth.

A snort wheeze is telling another buck that he is ready to fight.  A proper snort wheeze sounds lie, “TIF, TIF, TIFFFF”.  For a better understanding on how this call sounds I recommend getting online and watching some videos of it.

Last but not least is rattling.  I used rattling along with doe bleats and buck grunts to coax the buck in that I mentioned in the beginning of the story.  As most of you know, rattling imitates two bucks fighting over a doe.  When other bucks hear this fight, they think it will be easy to come in and swoop the doe off of her feet while the other bucks are occupied on each other.

Early in the season I like to just click the tips of the antlers together for a few seconds.  An aggressive fight now might spook other bucks off.  As the rut picks up, I get more aggressive with my rattling sequences and let them last for 15 to 30 seconds.

Rattling works best in areas where the hunting pressure is low.  Also. The more mature bucks there are the better of your chances at success.  If you are hunting a state with a lot of yearling bucks and a hunter behind every other tree, rattling will not work as good.

The great debate among deer hunters is whether to blind call or not.  I personally do not like to blind call.  I want to see how a buck responds to the call.  His reaction will dictate how I continue to call or not call for that matter.

Another reason I do not like to blind call is that I don’t want to be taken by surprise by an unsuspecting buck.  Let’s say that you are calling blind and a big ol’ buck slips in behind you.  You have no idea he is there, but he is patiently scanning the area.  After a few minutes, you believe a buck isn’t coming in and you go to scratch your nose.  Well, that is all it took for that buck to hightail it out of the area without ever offering a shot.  Not only is he gone, but he is now educated to what you are doing and where you were.

If you have not yet attempted to call a whitetail in, you are missing out on an exciting opportunity.  This is a great method to see more deer and to call one within range.