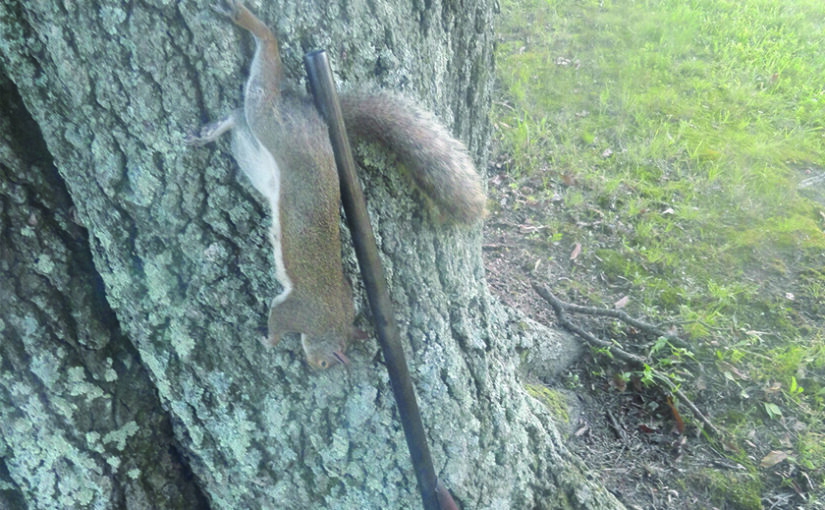 Squirrel season opens in late summer throughout most of the United States and stays open well into winter. With a liberal bag limit, months of hunting to be enjoyed by both young and old alike and with more than enough squirrels to go around there is sure to be non-stop hunting action.

The opening day of squirrel season can prove to be tougher than you might think. With the trees still full of leaves it can be hard to spot the squirrels. Not to mention having to contend with the sweltering heat of September that is possible, the mosquitoes looking for a quick meal and the sticky cobwebs that seem to jump out of nowhere and paste to your face as you navigate your way through the dense woods. All of these things are almost enough to make some hunters wait another month or so before venturing out on a squirrel hunt.  But the hunter who waits is missing on out some great hunting action.

Some hunters enjoy the challenge of using a scoped .22 caliber rifle. With a rifle a headshot is the most sought after shot. The squirrel quickly dies, and no meat is damaged. When it comes to shotguns the 410 and 20 gauges are the most widely used. The 12 gauge will work fine, but all that firepower is not required.  My weapon of choice is a 20-guage pump with either No. 8 or No. 6 shot size. Again try to aim for the head for the animal when using a scattergun, but some shot will unavoidably still reach the body.  I prefer the shotgun because not all shots will be at a stationary target, and I like knowing that I can harvest a squirrel as it leaps from one tree to the next.

When it comes to the action of the shotgun decision is up to the individual hunter’s preference. A semi-automatic is fine, but not necessary. I use a pump action just because that is what I am used to carrying while deer and upland bird hunting. Very seldom will a hunter need more than one shot. After the first shot most squirrels in the area will take to cover for the next few minutes waiting for the danger to pass by. For that reason, a lot of hunters are comfortable to carry nothing more than a lightweight single shot with them.

Wearing camouflage clothing is up to the individual hunter. When I am squirrel hunting, I normally wear camouflage pants, shirt, and hat. I do not see the need to wear camo gloves or a facemask like I do when bow hunting deer. More times than I can remember while gun hunting for whitetails, I have had squirrels come within a couple of feet of me. Close enough that I was a little anxious that a mad squirrel might attack me. This all happened while wearing a blaze orange vest and hat. I believe a hunter that remains still stands the best chance to harvest his limit of squirrels, but I do not chance it. I still wear my camouflage.

Like I wrote earlier the beginning of the season will find the trees still full of leaves. This will make it difficult to spot the squirrels. Hunting the midday hours is not my preference. The heat is not worth it to me, and the squirrels feel the same way. They tend to stay in their nest during the heat of the day.

I like to get up early, fill my thermos full of coffee, and set up in a location that has several hickory trees close by. I do not move from one location to the next. Squirrels cannot resist hickory-nuts and will eventually come for their favorite meal. At times you will be frustrated because all you can hear is barking from the squirrels hidden from view. Try coaxing the squirrels within view by using a barking squirrel call. This might be all you need to get them to show themselves. Also, use the call after you have shot. Squirrels will retreat out of harm’s way upon hearing the gun blast. Hearing the squirrel call will cause other squirrels to believe the coast is clear and they will come out, ready to socialize with the other squirrels.

Because the temperatures can be hot, even shortly after sunrise, there is the question with what care should be taken with your kill to ensure it does not spoil.

There are three options:  Simply do nothing until you return home; field-dress the animal; completely field-dress and skin the animal. It is fine to do nothing until you get home within the next thirty minutes or so. Any longer than that and you should at the very least field-dress the animal. There is a good chance that a squirrel being shot with a shotgun has been gut shot and vile fluids are tainting the meat causing it to go rancid, much like that of a gut shot whitetail. For that reason, I like to field-dress the critter. I also carry a couple 1-liter pop bottles, filled with water. That way I can wash out the body cavities. Since you will not be moving around early in the season the added bulk is not that big of a deal. The only reason to skin the squirrel after the shot is that a freshly killed squirrel is much easier to skin compared to one that has been dead for any period of time. How you tend to the animal after it has been shot is something each hunter must decide for himself or herself.

The early season tactics are still productive during the morning and evening hours as the season progresses. But this is also the time that can be good at any hour of the day.

Slowly walking through the woods, stopping frequently to listen and watch will often give the location of squirrels away. The sound of a squirrel breaking a hickory-nut is hard to miss.

Even when snow covers the ground squirrels will still have to get out of their nest. There will always be the need for food and water. Do not put your gun up just because the temperatures have dipped, and snow blankets the ground. This type of hunting might be just what you need to break the cabin fever.

Of course, the first reason I hunt the squirrel is for the wonderful food they provide and for the enjoyment. Besides being a hunter, I am also a trapper. Canines love an easy meal. I use the carcass and intestines as bait at my canine sets. I do not use the tails as bait though. Instead, I sell the tails to Mepps fishing lures where they use the hair from the squirrel’s tails for their buck tail fishing lures. If I have enough squirrels stockpiled for trapping, I then begin skinning out the squirrels like I would a raccoon. After skinning, fleshing, stretching, and drying a good squirrel hide will fetch a couple of dollars.

Do not get the cabin blues this fall. Squirrel season is right around the corner.