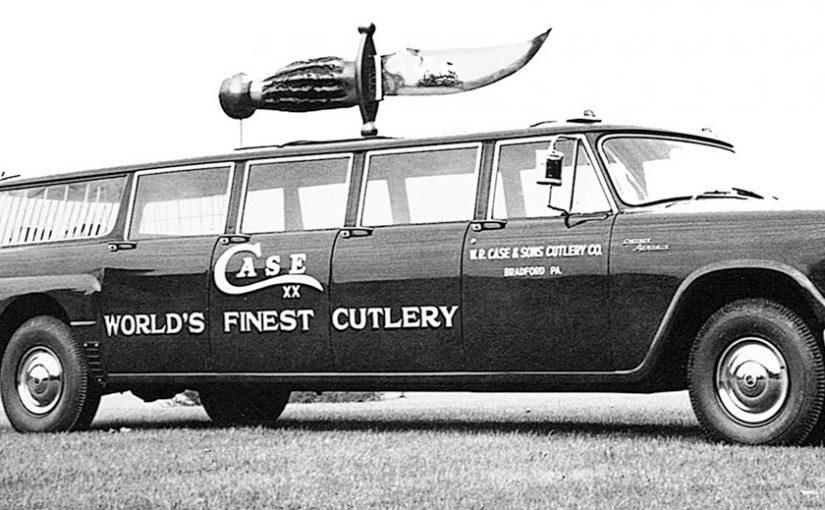 Few American knife makers can match the rich history of Case. The company traces its roots back to before the turn of the 20th century, when the Case Brothers made knives they sold along a wagon trail in upstate New York.

Job Case, the patriarch of the Case family, never made a knife. Yet his face appeared on much of the packaging and advertising in the early days. Even back then knife companies were looking to get an “edge” on their competitors, and Case believed that if they showed the mature face of Job, their company would appear older and more established than it actually was.

The current company, W.R. Case & Sons Cutlery, was named after William Russel Case and was founded by his son, John Russell Case, who worked for his uncles selling Case Brothers Co. knives, and early incarnation founded in 1900 and operated out of his grandfather Job’s home.

Russ was a natural salesman, and when the uncles realized he was making more money selling the knives than they were building them, the older gentleman issued an ultimatum: Russ must take a pay cut or leave the company.

So, Russ left, and eventually was joined with his brother-n-law Harvey Platts to form what became W.R Case & Sons. Harvey had been with C. Platts and Sons, a cutlery company that was failing. Harvey picked up his equipment and joined Case. With Russ’s salesmanship and Harvey’s knife-manufacturing skills, Case became a household name.

Case makes a knife for the job, whether it be skinning a muskrat in a Michigan marsh, an elk in Wyoming, or chopping onions in the kitchen. Case knives withstand the abuse that trappers, hunters, and campers dish out every day.

What makes Case knives better? While other manufacturers may only temper a blade once, Case tempers theirs twice. This is what the xx stamped on the blades signifies. Each knife is hand-assembled, so no two look or feel exactly the same. Older Case pocketknives are known as much for collector value as rugged dependability, mainly because of the vast array of designs, patterns and handle materials used over the last 128 years.

All Case knives have a stamp on the blade that holds important information about the knife, especially for collectors. Over the years the stamp, or “tang stamp” as Case calls it, has changed several times. You can go to the Case website, click on the Case College section, then Tang Stamps, and find the time period in which your Case was made. The section also has good information about knife patterns, blade steel, handle materials and proper care.

Case knives are warranted to be free of defects in material and workmanship for the life of the owner. If a favorite knife is damaged because of misuse, Case may be able to repair it for a reasonable fee.

I keep a Case Trapper pocketknife in my skinning shed. The two-blade knife is remarkably lightweight, holds an edge and also sharpens easily. It feels comfortable in my hand and does a good job skinning critters like muskrat, coon and fox. For coyote or something bigger, I may opt for the Case Twin Finn, a two-knife set. The larger fixed-blade sheath knifes are also fine for field-dressing deer and bigger game.

In addition to the iconic Trapper for trappers, Case makes the Slimline Trapper, Trapperlock, and Mini Trapper. The Folding Hunter is equally well-known.

Case has played a role in U.S. military operations at least since World War 1 when the Navy bought 81,000 knives for 39 cents each. During WW II, Russ Case supported the war effort and even provided transportation to get his employees back and forth to work in the “Case Car,” saving gasoline, oil and rubber in a time of rationing. This company tradition continued through 1976.

Case even worked with NASA to provide a knife for manned Apollo and Gemini space flights. The company can literally claim their knives have been to the moon and back.

An M-1 Survival knife and scabbard, aka the astronaut knife, was installed on the door of the space capsule. Fred Feightner, communications manager for Case, told me the knife was placed there so the astronauts could grab it quickly should something go wrong during splashdown in the ocean. Back in an era before GPS and satellite navigation, they might need a big, sturdy survival knife if they weren’t rescued quickly.

After my father passed, I was sorting through his things, keeping the family heirlooms, and donating what others could use. In a dresser drawer I found several Case knives, still in the unopened boxes, perhaps Holiday and birthday gifts he had received over the years. I never knew he had these knives, still have no idea why he didn’t use them. But they remain in the dresser today, untouched.

Looking back all these years later, I realize that as was often the case, Dad might have known something I didn’t. A couple of the knives are true collector items, and they all came to mean a little more to me as I researched this story. As I was talking to the folks at the company, it hit home that this is much more than a knife maker. Case truly is part of the American outdoor tradition.