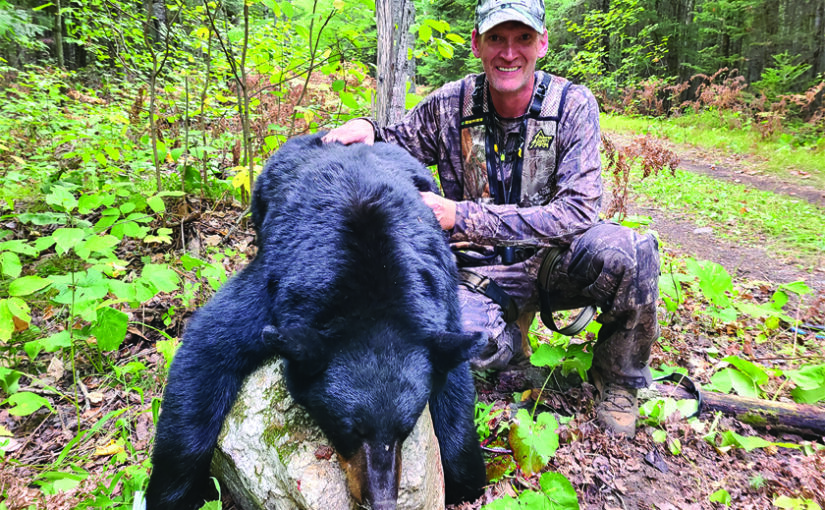 If you are looking to bear hunt in Minnesota, you need to start planning early. Years early if you want to hunt in a zone with a lot of bears and a good chance at success.

That is exactly what I did six years ago when I started purchasing preference points for the opportunity to hunt bears in Minnesota. I knew going in that the wait would be long, but worth it.

After stacking up points for six years I knew that I had enough points to put in for application on my seventh year for Unit 27. This zone has a lot of bears, and the success rate runs high.

Receiving a post card in the mail during the summer of 2021 stating I had been drawn for a permit, I immediately began the call to book a guide. The search did not take long. As soon as I found out one of the most respected names in the bear hunting world was now guiding, I knew who to get in touch with.

I settled on Bernie Barringer. Bernie has killed dozens of bears over the years, wrote numerous books and many magazine articles on the subject of bear hunting. Having been to one of his seminars in the past, I knew this guy had it going on.

Even though this would be Bernie’s first year as a bear guide, I felt confident my wait for a Minnesota bear would be worth it hunting with him.

Leading up to the hunt I quickly realized that this was the year to bear hunt in the state of Minnesota. The lack of rain throughout the summer kept the mast crop low. If the bears wanted a good meal, the best place was at a bait site Bernie had prepared. And the bears, multiple bears per sight, took advantage of the free food.

Watching the weather, the days leading up to our hunt it became clear that it wasn’t going to be in our favor the entire week. The beginning and end of the week looked promising but sandwiched in between would be some rain showers, some possibly strong.

Bears will move in the rain, but strong winds will keep them bedded down. Bears rely on their senses to be aware of any danger. With the wind swirling through the trees, it would be hard for the bears to smell and hear of any dangers, so they often stay bedded until the wind moves out.

Opening day finally arrived and after double checking my ability to shoot straight, we made our way to the stand. As predicted, the weather was looking good for the opener.  Everything felt good for having a good opportunity at a bear.

As Bernie was pulling up to the path I would use to walk to the stand, we noticed a nice bear already at the bait. If that isn’t a good omen, I don’t know what is. Dropping me off at my stand, Bernie allowed me time to get in before baiting the barrel. Hopefully for the last time.

A few hours passed and at four-thirty the feeding frenzy still wasn’t happening. I was not worried though. Everything in my body told me this was the night to kill my first Minnesota bear. Trail camera photos told me several bears routinely showed up around five every evening and I hoped that would hold true this evening. I had my eyes set on one particular bear that carried a nice white “blaze” on his chest.

At two minutes past five I heard a twig snap to my right. I looked over expecting to see a squirrel.  Often times, you don’t hear a bear approaching. I will be the first to admit I was more than a little surprised to see a nice black bear headed straight for the bit site. Bernie told me later that the bear purposely broke the twig to let other bears that might be at the bait that he was coming in.

Upon seeing the bear, I immediately turned on the camera I would be filming with and hit the remote to turn on the Tactacam cameras I had on the ground. This hunt was being filmed for an episode of Bone Wild TV that airs on the Pursuit Channel.

Cautiously, the bear maneuvered around the bait, testing the wind with its strong nose.  Satisfied he was not in any danger, the bear settled in for a dinner of cookiewafers he came to love in the weeks leading up to this day.

When the bear turned towards me to scent-check the area I knew it was the bear I was after. It wasn’t the biggest bear visiting the site, but his white blaze just below his chin and the long black coat was a dead give away it was the bear I had wanted an opportunity at.

With the bear content to eat and the sweet contents of the barrel within easy reach, the bear quickly began his evening meal. A few seconds passed with the bear having his back to me.  My Xpedition crossbow was shouldered, waiting for the perfect broadside shot.

Watching the bear through my Hawke scope, he slowly began to circle around. Knowing my shot opportunity was about to happen, I flipped the safety off and waited for the shot.

Stopping perfectly broadside to me, the bear put his head down for a snack. I quickly lined up the illuminated red crosshair for a good lung shot, settled my nerves the best I could and squeezed the trigger. The arrow flew true and with a loud thud the bear fell for a split second before regaining his composure and bounding into the dense forest.

As I watched the Nockturnal Lighted Nock bury deep into the bear’s black coat I knew the hit was good. I can’t stress enough how important lighted nocks are to bowhunters when it comes to knowing exactly where their arrow hit.

Per outfitters orders, I stayed in my stand and made the call to Bernie letting him know what just happened. Within a few minutes I could hear the side by side making its way down the dirt road.

It wasn’t long before Bernie and his longtime hunting buddy, Virgil, were on location.  Telling the story of how everything went down, we made the decision to go to where the bear was standing when I shot.

Bright red blood was immediately noticeable as was half of my Carbon Express Piledriver arrow. Looking through the thick vegetation it looked like someone took a red paint bucket and threw it all over the leaves and ground. The Steel Hybrid Crossbow Broadhead from Wac’Em® certainly did the job.

As I made my way into the woods, the rest of the group looked to the ground as they followed the blood.  In my heart I knew the bear was close. Stopping, I got on my hands and knees and looked under thick undergrowth. Not 15 yards in front of us laid my bear.  With a holler, the rest knew I spotted him.

The bear ran less than 60-yards before toppling over. Years of waiting went into my first Minnesota bear hunt ever that lasted less than a day.

To say I was excited is an understatement. I have been fortunate to have hunted animals across the country and Africa. When this bear presented a shot, I was as nervous as I have ever been on any animal. Finding the animal filled me with emotions that very few will understand.  This was truly a hunt of a lifetime and the number one item on my bucket list.

The bear was not one of the giants I knew was in the area. But, weighing in at 154-pounds I was extremely proud of my accomplishment. It might be a while before I can make it to Minnesota to hunt bears again, but I will start the process all over again of collecting preference points until I have enough to get drawn. In the meantime, there are other states where I can hunt bears.  Yep, I have bear fever.

I was not the only hunter to have success that week. All together there were five hunters in camp, and all filled their tags, having multiple sightings by each hunter. I hate to say it, but my bear was the smallest of the week. The big bear award went to a hunter from North Dakota with a “toad” tipping the scales at almost 400 pounds.

Remember when I said there was a bear at the bait when we arrived? Well, we ended the hunt the same way.  As we were standing over my bear reliving the hunt, I looked up to see a giant bear at the bait, just 60 yards away.  That is a great way to end a hunt.

To learn more about hunting with Bernie in Minnesota head over to www.bucksbullsbears.com and click on the tab for bear hunting outfitter. You can expect active baits, homecooked meals, comfortable lodging and excellent fishing just a few feet from the lodge.