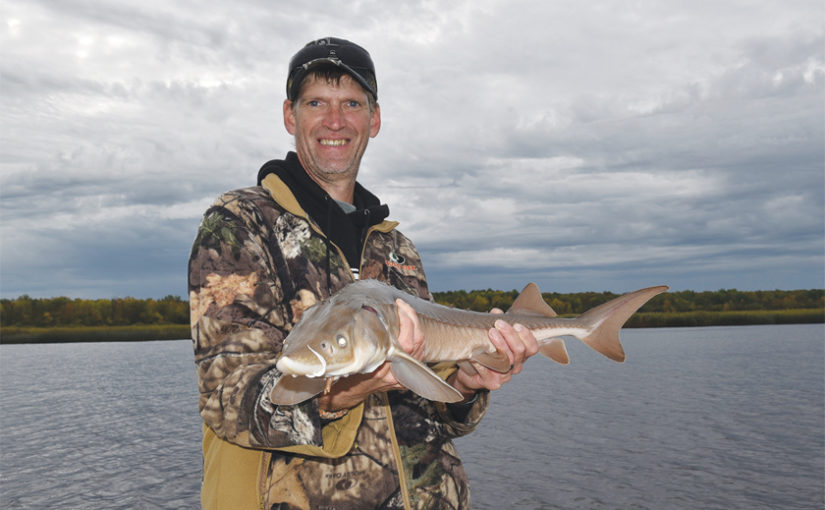 Not many anglers get the opportunity to fish for sturgeon.  When the opportunity presented itself to my wife and I, along with my colleague Brandon Butler to fish the Rainy River near Baudette, MN, we jumped on the chance.

None of us had ever fished for sturgeon before, so we were not entirely sure what to expect.  However, the days leading up to our trip allowed us to talk to friends who had previously had the experience so we weren’t completely blind going in.

Lake of the Woods and the Rainy River are known for their world-class walleye fishery.  What many don’t know is about the amazing sturgeon fishing that is available.  However, that is quickly changing.

Over the last 15 to 20 years more and more anglers have traveled to Lake of the Woods and the Rainy River to have the chance at catching a giant Lake Sturgeon.  Approximately 4,000 sturgeon tags are sold annually.

It wasn’t that many years ago that the sturgeon was almost completely wiped out.  This was in large part because of commercial fisherman taking a million of these fish out of the water per year.  Commercial fishing ended in 1940, and 1918 was the last year that more than 10,000 fish were harvested.  That is a lot of fish.  Also, paper mills were dropping pulp in the water which didn’t help out the fish at all.

But, in 1972 the Federal Clean Water Act stopped the pollution from the paper mills.  Along with good science and an increased public interest, the sturgeon population was able to rebound without restocking efforts.

Lake sturgeon begin to spawn in late May or early June when the water temperatures reach 50-degrees.  Beginning in mid-May, the sturgeon begins to move into their spawning grounds.  Females spawn once every four years and the males every year.

Our guide from the Sportsman’s Lodge was more than knowledgeable on the species, and it did not take long for Brandon to land the first sturgeon.  My wife quickly followed, and eventually I was able to put one in the boat.

Throughout the morning we landed several sturgeons along with a few walleyes.  I don’t know of any angler that will complain about tossing a few walleyes in the cooler.

Our tactic was to anchor upstream of a hole in the river, toss our bait out and let it settle to the bottom, allow the scent of the bait to move downstream to the fish and wait.  Sometimes the bite would happen within seconds, other times several minutes passed before we felt a light tug on out bait.

Using circle hooks, there was no need to set the hook.  The fish basically hooked itself, and all we needed to do was reel the fish in.

Our bait was 2 or 3 night crawlers balled up on a circle hook along with an Emerald Shiner that is a natural baitfish in the waters we were fishing.

Lake Sturgeon fishing has some dates you need to be aware of.  For the 2017 season it began April 24th and ran through May 7th.  Anglers are allowed to keep one fish per calendar year, fish must be 45-50” inclusive or over 75”.  It was catch-and-release only from May 8th through May 15th.  It was closed from May 16th through June 3oth and was open again from July 1st through September 30th with the same limits mentioned above.  Be sure to check the regulations before heading out next year.

For more information about fishing the Rainy River or Lake of the Woods, available lodging, fishing reports and other opportunities in the area, go to  www.lakeofthewoodsmn.com.