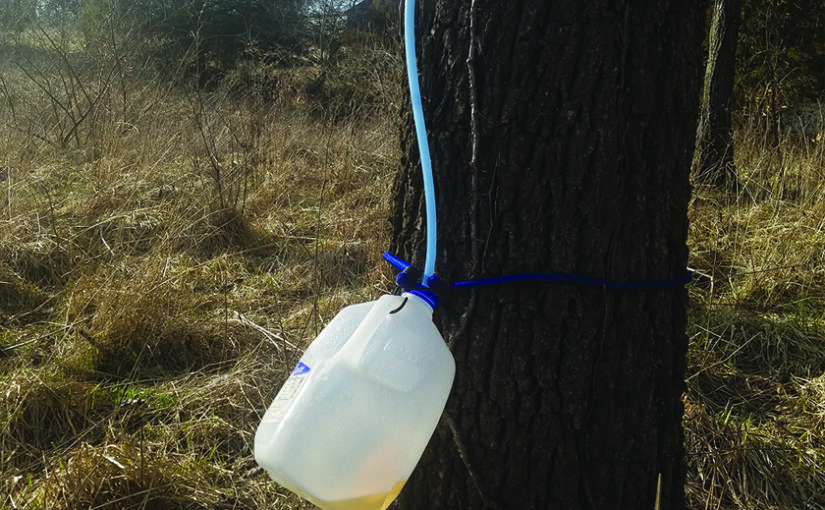 Delicious Maple Syrup Out Your Back Door

Deer season has been over for a few weeks now.  Spring turkey season is approaching, but not quick enough.  If you are anything like me the winter blues are beginning to take its toll.

We might not live in Vermont, a state known for its pure maple syrup, but here in the Midwest maple syrup is not that far away.  It might be as close as out your back door.

It does not take many maple trees to produce enough maple syrup to supply family and friends sweet syrup all year long.  And it is probably a lot easier than you think.  The supplies needed are few and can easily be obtained from large scale maple syrup producers or from the internet.

To begin the process, drill a hole with a 7/16-inch drill bit 2-inches into the tree at a slight incline on the south facing side of the tree.  Clean the hole out by taking the drill in and out of the hole a few times.  Now take a spile (metal tap purchased just for this purpose) and put it in the hole and hang a clean 5-gallon bucket on the tap.  If the sap is not flowing it is either too cold or the spile needs to go into the tree further.

It might seem that the sap is barely trickling from the tree.  However, it is possible to collect as much as 5 gallons of sap from a single tree in just one day.  Also, on large trees, 2 taps can be used.  Do not miss a day of collecting sap, or you could end with buckets overflowing.  When collecting the sap take a very clean rubber container with handles to put the sap into.  Once the sap has all been collected get it in a cool place (refrigerator) as soon as you can.  Do not store the sap for more than 48 hours before you begin the boiling process.

You cannot have syrup without boiling the sap.  No question, it is a long process, but it has to be done.  I recommend having a full day to thicken the sap.  If you do not get an early start, you will find yourself staying up late.

I use large soup pots to boil the sap.  As you pour the sap into the pots run it over a thin cloth placed in a strainer to remove any impurities. The same maple syrup operation you purchased the spiles from will have filter clothes for this process, as well for the straining process that will need to be done when the boiling is finished.

Unless you plan on making a lot of syrup a kitchen stove top and one or two big pots should suffice.  Turn the stove burners as high as they will go and begin the waiting game.  A word of caution:  Do not leave the syrup unattended on the stove.  Overcooking could cause the syrup to crystallize, darken and thicken.

As the sap cooks down add more sap to the pot.  Overtime it is a good idea to move the sap to a smaller pot so it is easier to work with.  Once the sap reaches 219 degrees Fahrenheit on a candy thermometer it will have small bubbles in the boiling.  The sap is now syrup.  Even though it is thin it is still syrup.  Once the syrup reaches 219 degrees remove it from the stove.  Use thick felt to filter the syrup into canning jars and seal the lids tightly.

As I mentioned earlier the spiles and filter cloth can be found on the internet or from other syrup producers.  The buckets can be found locally. Thoroughly clean the collection buckets and the rubber transport buckets to prevent bacteria growth.

Maple syrup collection only last for a couple of weeks.  Once the trees begin to bud maple syrup harvest and production is over for another 11 ½ months.  All you can do until then is enjoy 100 percent pure maple syrup that you collected from those gray maple trees you have around your home.