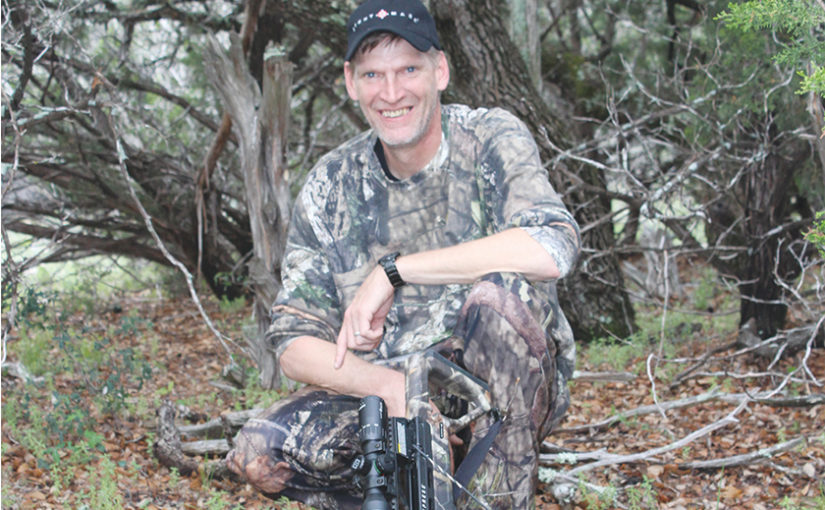 “Texas has it all.”  Those were the words muttered by my nephew Jordan Blair as we drove through the Lone Star State on our way to hunt Aoudad.  While Texas might not have it all, the state certainly does have a lot when it comes to hunting.

If you love hunting, Texas is the place for you.  With so many species to hunt and year-round seasons on a lot of exotics that are roaming freely and within high fences, the list of possibilities is long.

I grew up seeing photos of Aoudad sheep.  Something about them mesmerized me whether it was their long “beard”, the chaps on their legs or their massive horns.  It might have been a combination of all three, but I knew one day I wanted to hunt one of these sheep that are predominantly found in Texas with a few in New Mexico.

Aoudad, often called Barbary sheep, are native to Africa.  American soldiers during World War II that were stationed in Chad and the Barbary Coast of Northern Africa were the first to discover Aoudad and quickly realized they would make a good game animal back in the states.  Upon returning home the soldiers helped to arrange moving Aoudad back to the states.  In 1950, New Mexico received their first transplant of Aoudad and Texas soon followed suit in 1957 when 31 were released southwest of Claude in Armstrong County, and 13 near Quitaque.

The transplants proved to go over very well in the Palo Duro Canyon area of Texas.  In 1963 the population was at levels that the state believed a hunt was possible.  Forty-two permits were issued resulting in the harvest of six rams and three ewes.  A year later fifty permits were issued resulting in eight rams and seven ewes being killed.  In 1965, 70 permit holders managed to harvest eight rams and eight ewes.  There is no exact number of animals that roam across Texas today, but the numbers are pushing close to 30,000 with several hundred in New Mexico.  Hunters can hunt Aoudad both in low and high fence situations.

As I mentioned in the beginning of this article there was something that drew me to want to hunt these animals.  There appearance is unlike other species of sheep available to hunt.  Males can grow to weigh more than 300 pounds with 200 to 250 pounds the average for an adult ram.  Ewes are considerably smaller in both body size as well as horn size.  A mature ram will have an overall horn length somewhere between 27 to 34 -inches.  A big ewe will have horns topping out at about half of a mature ram.  The biggest ewe I ever laid eyes on had horns measuring 21-inches.  The biggest ewe I have ever harvested had horns measuring 17-inches and I doubt I will be able to top that.

Aoudad provide year-round hunting opportunities. With that being said, much of the hunting takes place late fall through early spring while temperatures are still tolerable.  An aoudad hunt is easily combined with other animals to hunt such as predators, hogs and deer.

There are different ways to hunt Aoudad, but they can be a challenge if you are hunting with any type of archery gear, including crossbows.  The eyesight of Aoudad is as good as animal I have eve hunted and I have hunted a lot of different species.  The wide-open terrain of where these animals live makes it tough to execute a stalk.  Even at a distance out to a half-mile I have been busted by these animals and have had them run off.  If you can glass these animals with a quality spotting scope or binocular and everything is in your favor such as wind and cover, you can get within range.  Just expect more blown stalks than successful ones.

Aoudad are known to visit feeders intended for other game animals such as hogs and deer.  If you know that Aoudads are visiting feeders, hunting out of a ground blind is an easier way to hunt these animals.  Scent control still must be practiced and be sure to use a ground blind with a black lining to keep from being picked out.

There are guides and outfitters that offer quality Aoudad hunts.  Prices range from $2,500 to $6,500.  The price varies greatly from one outfitter to the next so be sure to know what is offered and do your research before booking any guided hunt.

Another option is to apply for a public-land permit.  It is tough to draw a tag and killing an animal is even tougher.  That is why hiring an outfitter is a better option.

Texas is a state known for high fences and there are plenty of high-fence operations that offer Aoudad hunts.  But, do not expect a high-fence hunt to be a slam dunk.  Many of these operations are run on thousands of acres after truly wild Aoudad.  Hunts will cost $2000 to $4000 for a trophy ram with high success rates.  A hunt for an Aoudad ewe is just a fraction of what it is to hunt a ram often just costing $300 or $400 with all the excitement of a ram hunt. It is an affordable way to see if this type of hunt is for you before spending larger amounts of money on hunting a ram.

Over the years, Aoudad have escaped high-fence ranches when storms have come through and knocked the fences down.  This allowed many exotic species of animals to escape and roam freely across a lot of the state.

Landowners are hiring companies that specialize in wildlife capture to come in and catch these animals to sell and transport them to high fence operations.  This is typically done using helicopters and nets.  So, just because you are hunting a high-fence ranch, it is a good possibility that the animals you are hunting are as wild as any other animal you would hunt and they have more than enough room to live as they would in low-fence conditions.  Again, do your homework and ask for references before booking any such hunt.

Aoudad are strong animals and you will need equipment to handle the job.  I recommend cut on contact broadheads.  Because Aoudad sheep are exotics, their vitals lay a little bit more forward than some of the animals native to the states.

Deer hunters are accustomed to aiming right behind the front leg of a whitetail for a heart shot.  If you do this on an Aoudad you might miss the vitals.  The heart of an Aoudad is several inches forward, almost laying in its throat.  A good shot placement will be right in the shoulder.  This will likely result in a good lung hit.  That is why a quality cut on contact broadhead is so important so you can penetrate the shoulder on one of the tough animals.

Depending on who you ask, you will get different answers as to whether Aoudad is good to eat.  I have had Aoudad that was as good as anything else I have ever eaten.  Other times, it was not good at all.  If you are hunting for meat, I recommend going after a young ewe or ram.  If you do kill an old mature ram the key is to cook it on low for several hours.  Many hunters either make sausage or jerky which makes it a little more tolerable to the taste buds.

My most recent hunt took place near Junction, Texas.  After doing some research my nephew and I settled on hunting with Johns Exotics.  Johns Exotics has a lot of different species to hunt and most of the animals are transplanted from ranches where the animals are causing trouble.  Knowing that we would be hunting wild animals on a ranch with high reviews we felt comfortable we would have a quality hunt at quality animals.

Our options were open but after a few failed stalks we were hoping to find a way to get a couple ewes for the freezer.  The owner of the ranch, Keith along with his son Zach, did some glassing from afar and found where Aoudad were routinely feeding early in the morning and late in the evening.  Knowing where the animals were, blinds were put in place to prepare for an ambush.

Our first attempt from the blind put my nephew Jordan on the trigger.  I would be helping him along the way to choose an animal that he was after.  In this case, a young ewe for the freezer.

Shortly after first light we spotted a herd of Aoudad in the distance.  Through our binoculars, we could tell there were some big rams as well as some ewes in the bunch.  They were moving in our direction, but with the distance they had to cover we had plenty of time to glass the animals for the one he wanted and to prepare for a shot.

Finally, the animals had made it to 100 yards and were closing faster on our position.  Knowing which one he wanted to shoot, it was just a matter of waiting for them to close another 60 yards.

Once the animals closed the distance to 30 yards it was just a matter of letting the animals separate from one another to offer a clean shot.  With the razor sharp broadheads and the power behind his PSE Fang crossbow, we didn’t want to take the chance of the bolt blowing through the animals and hitting another.

With an open shot path, Jordan shouldered his crossbow, thumbed the trigger and put the crosshairs of his Sightmark Core scope on the animal’s shoulder.  With a squeeze of the trigger, the bolt impacted with a loud thud.  Crimson red blood immediately began to flow and after a short run of less than 50-yards the Aoudad toppled over in the middle of a pear cactus.

Jordan accomplished what he set out to do by harvesting his first Aoudad.  A young ewe that will make an awesome trophy in the form of a European mount and provide desirable meat for his family.

It was my turn that night but as hunting goes more times than not, we never saw an animal.  Later that evening we hashed out a game plan and decided to move to another part of the ranch where some Aoudad had been seen.

Spotting some Aoudad in the distance we prepared for a shot.  Just about the time we thought we might get a shot, a lone hog sprinted in for a quick bite to eat.  We were told before our hunt ever began that if we saw any hogs that we were to shoot them.  Knowing the Aoudads might spook, I quickly put my sights on the hog and let a bolt fly.  With a thud the broadhead hit home and the hog went one way and the Aoudad the other.

Knowing I had put a good hit on the young hog, we stayed put hoping the Aoudad might return.  About 15 minutes later the Aoudad cautiously returned.  Carefully looking the animals over I was able to choose a trophy ewe that would be hard to beat.

Double checking that I had a clean shot on the ewe, I squeezed the trigger and sent a bolt as the old ewe standing just 23 yards away.  The bolt flew true and the old nanny ran about 50 yards before toppling over.  I had just accomplished something a lot of hunters will never get the chance to do.  The ewe was aged at 16 years and had horns measuring 17-inches.  Truly a once-in-a-lifetime trophy.

Aoudad hunting seems like a dream that would be hard to accomplish, but it is a lot easier than many hunters think.  With a little research to find the best style of hunting you prefer whether it is a DIY hunt on public ground, hiring a guide to go after a free range animal or hunting one of the many ranches that cater to Aoudad hunters it is a hunt that will hold a special place in your accomplishments.