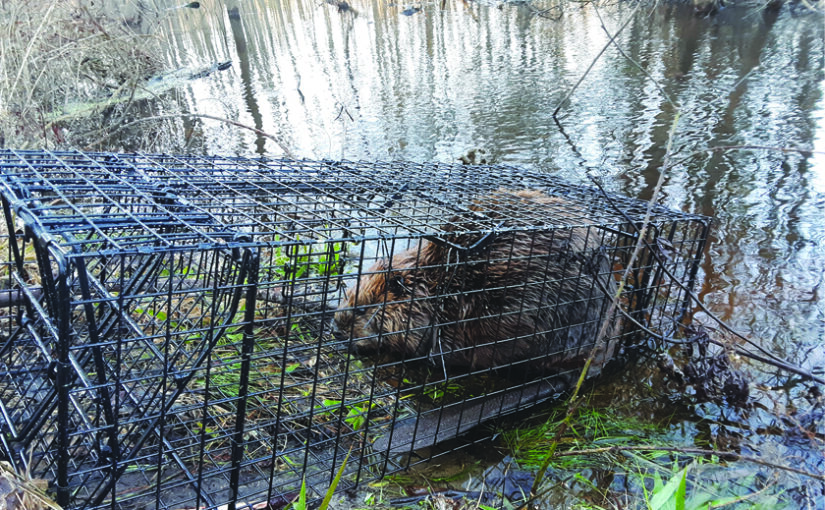 Cage Traps Are A Good Choice for Beavers

Imagine pulling up to small creek covered with beaver sign, getting a cage trap out of the truck, quickly setting it and tossing it in the water and moving on.  No stabilizing, digging trap beds or fooling with lure and baits.  It almost sounds too easy, doesn’t it?

When targeting beavers, many trappers rely on traditional sets using footholds, snares, and conibears.  There is a good reason for this as these traps and the sets associated with them have proved themselves as being the best for decades.  But things are beginning to change for many trappers.

What many fur trappers are just learning is the effectiveness of using cage traps for beavers.  ADC trappers have been using them for years and rely on them to catch a lot of beaver in a small amount of time and move on to the next job.  As you read this you might be skeptical about why a person trapping during the traditional season would use a cage trap when there are proven traps that work perfectly.

Money is no longer a reason for most trappers to get out and do what they love.  Sure, if you catch enough animals you might break even selling to the fur buyer.  But there are other options for making a buck or two including the taxidermy market, tanned furs, castor and more.  But, if you can’t catch a lot of animals, you will not make any money this way either.

Probably the biggest reason trappers choose cage traps for beavers is their ease of setting.  Cage traps might be a tad bigger than what many trappers are accustomed to carrying on the line, but their size should not keep you from trying one or two.  If you can drive right up to the set location these traps are absolutely what you are looking for.

Many trappers will use a bodygrip trap in a channel, fence it off with some sticks and move on.  This set works great if you are OK with catching a beaver every other night or so.  The thing about beavers is that they often travel in at least pairs.  Wouldn’t you want the odds in your favor of catching more than one beaver as they swim through the area?

What I have been doing along with many trappers that rely on cage traps to catch a lot of beaver in a hurry is to use multiple traps in one channel.  There are not a lot of cage traps on the market.  Having tried what is available, I have settled on Jim Comstock’s double door beaver trap.  This trap is strong and measuring in at 39x18x12 it is large enough to hold the biggest beaver you are going to catch.

In a shallow, wide creek I would have enough cage traps to set side by side the width of the stream with a log placed over the top to close off the entire creek.  It might take three or four traps, but I might catch three or four beaver in one night.  In deeper water in the neighborhood of 25 – to – 30-inches that is narrow enough that one trap will cover the width, I have stacked traps one on top of another with both traps producing beaver.  It might be necessary to push stakes through the traps to hold the top trap in place, especially if the water is moving fast.  Try doing that with a conibear or snare.

The only option a beaver has if an entire creek is covered in cage traps and covered on top by a log is to go through the trap.

As far as lure goes, it isn’t necessary if the entire creek is fenced off with traps.  The beaver is going to be swimming through regardless if lure or bait is provoking them to come.  It is as simple as putting the traps in the water and moving on.

One of the biggest reasons I am using more and more cage traps for beavers is because of their versatility.  No rules are governing how to set them.  They can be set in shallow water, deep water, on land and even upside down which I recommend when using a Comstock beaver trap.  The powerful doors will lift and push the animal into the trap.

In a wide creek covering several feet, it would not make sense to fence it off for one conibear or snare.  It would take too much time and the sets would have to be made in a manner where the traps would stay in place once a beaver was caught.  The chances are just too high that a beaver would pull up the trap and spring other traps if you did fence the area off and set multiple traps.

Some of the best locations for cage traps are culverts, on ledges and cobblestones.  However, I have successfully caught beaver in cage traps using a castor mound set.  I made an artificial castor mound, lured it with castor and set the cage trap in the water right next to the bank.  I have had beaver ignore castor sets guarded with bodygrips and swim in my cage traps to get to the mounds.  Beavers are not scared to enter a cage trap.

You don’t have to give your traditional beaver traps you are accustomed to using but don’t shut out the idea of using cage traps.  They have their place on the trapline and will help you catch more beaver.