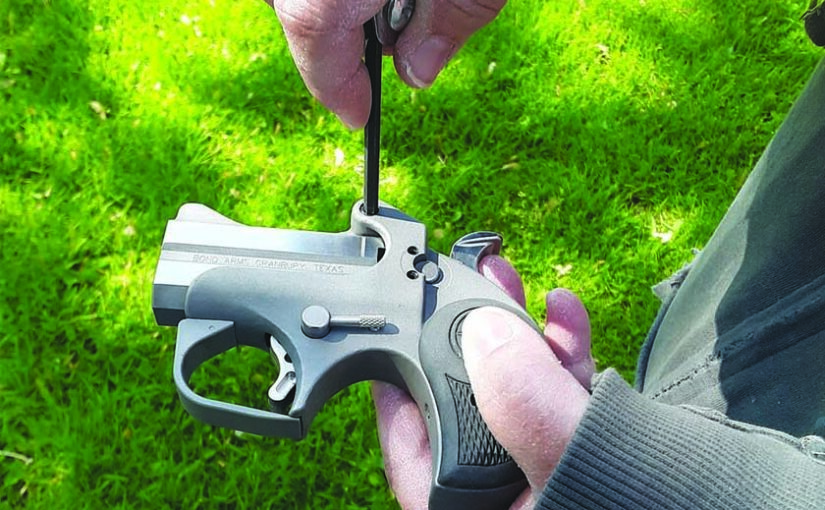 When my mom recently took her concealed carry class, she got in the market for a firearm to carry with her.  She was not looking for anything too bulky or tough to handle.  I have seen plenty of ads from Bond Arms and their Roughneck derringers and liked what I saw.  After studying the options that Bond Arms has, we settled on the 9mm Roughneck for my mother.

These firearms are made right here in the U.S.A in the Lonestar state.  They are compact, come in a variety of calibers, are affordable and accurate.  It seemed like they offered everything my mother wanted in an everyday carry “sidearm”.

The idea behind Bond Arms was to take away the thoughts that pocket-pistols were dangerous and build a safe, dependable, and accurate handgun.  After some hardships, that finally happened, and the Roughneck, in my opinion, is one of the best pistols of this style on the market today.

Safety measures are built into this little handgun that has not been seen in similar handguns in the past.  Other guns of this style have the firing pin extruded from the chamber with the hammer resting on it.  If a gun that is designed in this manner is accidentally dropped, jarred, or mishandled in other ways the chances of it going off are great.

With the Roughneck, the firing pin is positioned to be free of the chamber and goes back into position after being fired.  When the gun is fired, and the hammer hits the firing pin, it automatically jumps back into a half-cocked position and locks. The only way to fire the gun is by fully cocking the hammer and then squeezing the trigger.  Each gun also has a cross-bolt safety which is a great security feature to the hammer.

Besides all the safety measures, the interchangeable barrels set this handgun apart from its competitors.

There are currently 37-barrel combinations with lengths ranging from 2 ½ – 6-inches.  All barrels are designed to fit any Bond Arms Derringer.  So, if we decide to replace the 9mm barrel that came with the pistol with a .45LC/.410 6-inch barrel, we can.  It is as simple as taking out one screw, taking the barrel off and adding a new one.

Grips are easily interchangeable too.  Bond Arms has a variety of grips in various colors, materials, and styles.  These guns can easily and affordably be customized to fit your individual need and style.

Now, what about accuracy?  I have to admit that I was not expecting one of the little guns to be accurate.  After some time on the range, we learned that these guns are accurate out to about 10 yards. We were happily surprised by this. If you found yourself in a defensive position and had to rely on this gun to save you, it will.  A person would have plenty of space between them and any danger to accurately get their shots off.

After having this handgun for a few months now, I am positive we made the right decision.  The pistol is easy to handle and load.  The safety measures built into the gun are second to none and priced at less $270 it is a steal.  As far as holsters go, the Bond Arms website has a large selection of holsters to choose from as well as other firearms in their collection.  If you are looking for a quality American made gun for home protection, concealed carry and more, this gun will fit the bill.