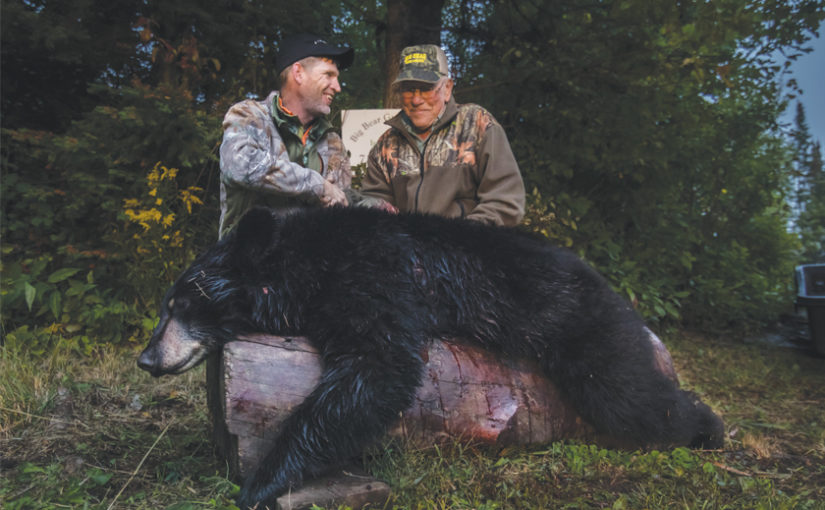 Wisconsin Bear Hunt – Worth the Wait

If you are looking to bear hunt in Wisconsin, you need to start planning early. Years early if you want to hunt in a zone with a lot of bears and a good chance at success.

That is exactly what I did eight years ago when I started purchasing preference points for the opportunity to hunt bears in Wisconsin. I knew going in that the wait would be long, but worth it.

After stacking up points for six years I knew that I had enough points to put in for application on my seventh year for Zone D. This zone has a lot of bears and the success rate runs high. It is the only zone in Wisconsin that raised their harvest quota for the 2019 bear season while the rest lowered their harvest quotas.

Receiving postcards in the mail in Mid-February stating my wife and I had been drawn for a permit, I immediately began the call to book a guide. Thinking we would get drawn for permits, this search began a couple of months earlier with me calling outfitters and checking references.

I settled on Big Bear Guide Service out of Iron River, WI. After talking with the owner Keith Holly and checking his references I knew he was as good as they come not only in Wisconsin but likely of any black bear guide in the United States or Canada.

With more than 1,800 black bears harvested from his camps and a very high success rate (100% most years), I felt confident my wait for a Wisconsin bear would be worth it hunting with him.

Leading up to the hunt, my wife and I made our way to Iron River to spend a couple of days with Keith baiting the sites and eventually being able to choose our sites after looking things over including trail camera photos. One thing we quickly realized during our brief stay was that Keith and his entire crew take their job seriously. Preparing the sites all summer long to ensure hunter success in September is their top priority.

Having never hunted bear before, this was a unique experience we enjoyed and learned from. The staff at Big Bear Guide Service encourages all their hunters to do this if they are able.

Watching the weather, the days leading up to our hunt it became clear that it wasn’t in our favor. High winds with strong thunderstorms, it would not be good for us to be sitting or the bears to be moving.

Bears will move in the rain, but strong winds will keep them bedded down. Bears rely on their senses to be aware of any danger. With the wind swirling through the trees, it would be hard for the bears to smell and hear of any dangers, so they often stay bedded until the wind moves out.

Opening day finally arrived and my wife and I went our separate ways. As predicted, the weather was not in our favor. The rain continued throughout the morning with strong thunderstorms quickly approaching. Strong winds were blowing our scent in every direction.

Communicating back and forth, we decided to get out of the woods and see what the evening hunt would bring.

The weather showed the rain ending early afternoon, but the winds would continue at about 13 mph. Because the rain was ending, I decided to return to my blind around noon to be there when the feeding frenzy began.

A few hours passed and at four-thirty the feeding frenzy still wasn’t happening. Uncomfortable due to the cold temperatures and strong winds I decided to keep pushing forward. Trail camera photos told me three bears routinely showed up around five every evening and I hoped that would hold this evening. I had my eyes sets on one particular bear that carried a nice white “blaze” on his chest.

At two minutes past five, I look up to see a black blob moving through the trees. Finally, a bear was visiting me.

Cautiously, the bear maneuvered around the bait, testing the wind with its strong nose. Satisfied he was not in any danger, the bear made easy work of knocking over the stump containing the cookie wafers he came to love in the weeks leading up to this day.

When the bear turned towards me to scent-check the area I knew it was the bear I was after. It wasn’t the biggest bear visiting the site, but his white blaze just below his chin and the long black coat was a dead giveaway it was the bear I had wanted an opportunity at.

With the stump on its side and its sweet contents spread on the ground, the bear quickly began his evening meal. A few seconds passed with the bear having his back to me. My Carbon Express crossbow was shouldered, waiting for the perfect broadside shot.

Watching the bear through my Sightmark Core SX scope, he slowly began to circle. Knowing my shot opportunity was about to happen, I flipped the safety off and waited for the shot.

Stopping perfectly broadside to me, the bear put his head down for a snack. I quickly lined up the illuminated red crosshair for a good lung shot, settled my nerves the best I could and squeezed the trigger. The arrow flew true and with a loud thud, the bear fell for a split second before regaining his composure and bounding into the dense forest.

I knew the arrow flew true and the bear wouldn’t stay on his feet long. Per outfitters orders, I retreated from the blind and made the call to the lodge informing them of what just transpired. The next call was to my wife.

Within minutes our guide, my wife Lotte and friend Jason Bisby were all on location. Telling the story of how everything went down, we decided to go to where the bear was standing when I shot.

Bright red blood was immediately noticeable as was half of my broken arrow. Looking through the thick vegetation it looked like someone took a red paint bucket and threw it all over the leaves and ground.

As we made our way into the woods, the rest of the group looked to the ground as they followed the blood. In my heart I knew the bear was close. Stopping, I got on my hands and knees and looked under thick undergrowth. Not 15 yards in front of us laid my bear. With a holler, the rest knew I spotted him.

The bear ran less than 30-yards before toppling over. Years of waiting went into my first bear hunt ever that lasted less than a day.

To say I was excited is an understatement. I have been fortunate to have hunted animals across the country and Africa. When this bear presented a shot, I was as nervous as I have ever been on any animal. Finding the animal filled me with emotions that very few will understand. This was truly a hunt of a lifetime and the number one item on my bucket list.

The bear was not one of the giants I knew was in the area. But, weighing in at 187-pounds I was extremely proud of my accomplishment. It might be a while before I can make it to Wisconsin to hunt bears again, but I will start the process all over again of collecting preference points until I have enough to get drawn. In the meantime, there are other states where I can hunt bears. Yep, I have bear fever.