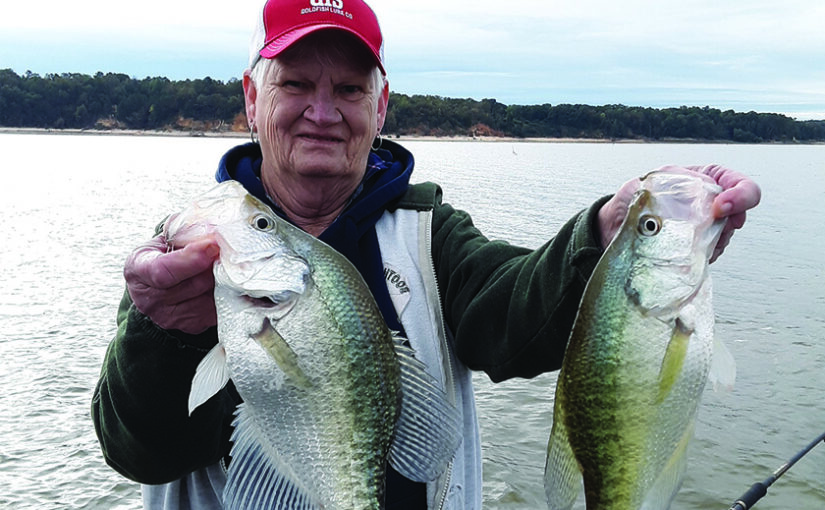 Crappie fishing in the fall is not for the faint at heart.  An angler is never sure where to find the fish from one day to the next.  Today they may be shallow, and tomorrow they will be swimming in deep water.  They are constantly moving, and they can stop biting at the drop of a hat, or start feeding as if a switch was just turned on.

Finding schools of crappie in the summer is not too difficult, but that all changes as the leaves change.  In the summer the crappie are located in the cool water of the lake, but when the air temperature drops so does the water temperature.  Eventually all of the water throughout the lake is the same temperature.  This is called the “turnover.”

In the summer the crappie were content in staying in the cool water and not moving around much.  Now that fall is upon us, and all the water is “cool”, the crappies are not bound to one place and are frequently moving.  This is what makes finding crappie so difficult.

To find schools of crappie in the fall, it will take a little bit more thinking than what you had to produce in the summer.  Here are a few things you can try.

Crappies are a lot like people when it comes to where they live.  They want their home to be as nice as it can possibly be.

The first thing an angler should look for is good water.  When the lake begins its fall “turnover” trash will rise from the bottom and poorly oxygenated water will be amongst it.  Crappie will move to better water sources with higher oxygen content.  These places can be found where streams dump into the lake bring with it water rich in oxygen, or in parts of the lake where it has yet to turnover.  If the body of water is large enough it will turn over at different times.  These parts of the water can be pinpointed easily because of the lack of floating debris.

Crappies seek out the much needed oxygen which the debris has stolen from the water.  In search of oxygen, the fish will invade the nearest source of good oxygen.  Normally this is where the waves and the wind is at it strongest.  If you see a shallow shoreline with plenty of wave activity, this would be worth investigating.

Once the turnover has stopped, and the water is back to normal, focus on standing timber.  By keeping an eye on the weather, anglers should have a good understanding where to find the fish.  On bright days, when the sun is able to penetrate deep into the water you will find fish close to the bottom.  On cloudy days and or windy days, crappies are likely to be within a few feet of the top.

Do not get in a rut and fish one tree too long.  A few seconds is all the longer that you need to fish a particular tree and then move on to the next one.  You will catch more fish by doing this than you would if you just focused on one tree.

The key to fishing standing timber is lure presentation.  When vertical jigging, grab the line after it hits bottom and slowly raise the lure up.  Crappies are not likely to respond to a falling lure.  When the bait is on the rise is when you can expect to get a strike.  This is a reaction strike by the surprised crappie.  All of a sudden, the lure is there in front of its face and out of instinct bite for it.

Do not give up when the weather turns cold.  Crappies can still be caught.

Choosing the right lure is important. Without the right type of bait you will not catch many fish.

If the crappies are unable to see because of poor visibility, they are likely to strike at vibrations and odor rather than by sight.  Loud lures with rattles, bright, flashy baits and ones sprayed with a fish attractant work well.

In stained water, fish closer to structure.  Even bouncing the lure off the cover from time to time will improve your success as it gets the attention of the fish.

Live bait also works well.  Hook a minnow so that I will stay alive.  I like to hook the crappie in front of the dorsal fin.  A minnow works especially well during turnover.

Another minnow trick is to fish a dead one.  Hook the dead minnow to the left or right of the gill.  When you jig the minnow it will appear to be wounded as it flutters in the water.

If the jig or the minnow are not producing, try the two together.  This combination might just fill up your live well.

Where legal, fish multiple poles at different depths and with different bait presentations as you slowly drift across the lake.  This tactic will help pinpoint the tough to find crappies in the fall.  When you have found the crappies, change all your poles to the same depth and lure.

Fall crappie fishing can be frustrating at times to say the least.  Do not give up.  If one technique is not working, switch to a different one.  Eventually you will find what the fish are looking for and where they are at.  All of the work will be worth it in the end when you have a mess of big slabs to fry up.

• 3 eggs beaten with a little milk

• Salt and pepper, to taste

Mix corn meal and flour together in a large zip-loc plastic bag.  Salt and pepper each fillet, dip in egg then drop in bag and shake until coated with flour mixture.  Drop fillets in hot peanut oil poured about ½-inch deep into a cast iron skillet.  Cook until fish flakes easily with a fork.