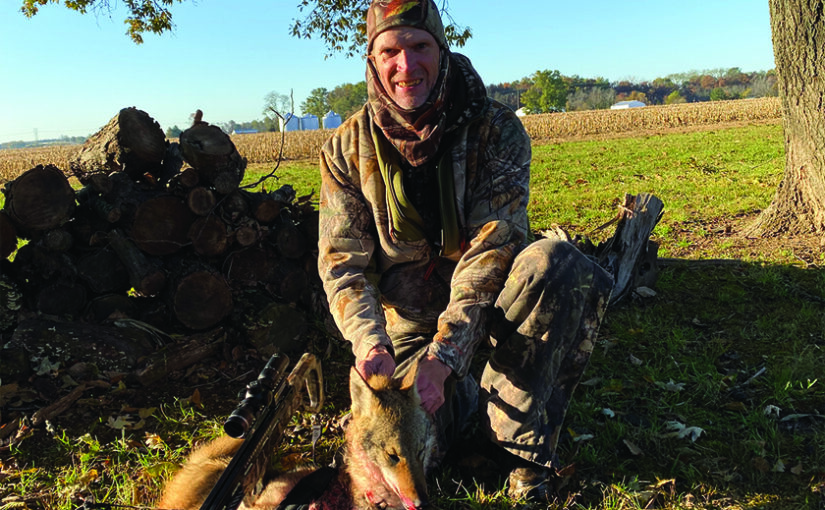 Hunters and land managers are always looking for ways to improve and protect the deer herd they hunt and that live on their property. They have buck to doe ratios down to a science, practice QDMA guidelines for trophy management, provide sanctuaries and food plots. The list can go on and on.

All of these things are fine and dandy, but what about predation from coyotes? In areas of the country where coyotes thrive, they can play a huge role in the survival rate of fawns and even healthy, mature deer. Are landowners doing enough to control the coyote population?

I have heard deer hunters say that a deer hunt quickly turns into a coyote hunt when they see one. That is great, but that is not enough. Taking out a coyote or two during the deer season helps, but it is not enough.

Hunters that target coyotes will certainly help reduce their numbers and help the deer herd. But, many hunters do not have the time or the equipment to hunt coyotes to make much of an impact. Especially in areas where there is an abundance of coyotes.

Biologists have found that coyotes can be particularly hard on fawns in the Southeast. In South Carolina, for example, a three-year study at the U.S. Forest Service’s Southern Research Station, a 300-square-mile area, found that only 16 of 60 radio-collared fawns lived past nine weeks. It was confirmed that coyotes killed at least 65 percent of those fawns and that number could easily be that 85 percent of the fawns were killed by coyotes. Other studies in the Southeast have found predation rates on fawns to be well over 50 percent.

In the Midwest, it is estimated that coyotes take out 20 percent of newborn fawns. And in states where deer yard up in severe winters, coyotes can easily run mature deer down in the deep snow and cause deep destruction to a deer herd in a single winter.

Turkeys, quail, pheasants, rabbits, and a long list of other creatures all suffer from coyotes. Coyotes are predators, plain and simple. They do not care where their next meal comes from

Coyotes are not just hurting deer, turkeys, rabbits, etc.…  Have you seen a decline in fox populations in your area? If you have it is likely because you have an abundance of coyotes in the area. Coyotes will prey on foxes bringing their numbers to almost nonexistence in some parts of the country.

Coyotes are predators that will also prey on coons, weasels, possums, and an occasional skunk, but not often.

It isn’t just about predation though. Coyotes can ruin a good hunt without even killing a deer. I don’t know about you, but more than once I have been sitting in a tree watching a deer walk closer and closer to my shooting lane and then all of a sudden, the deer stops, looks in a certain direction and takes off.

Hunter’s are left scratching their heads, wondering what just happened. The wind was perfect, the hunter was concealed but the deer still spooked. Then it happens. Out of nowhere a coyote or coyotes emerge. Then it becomes clear why the deer spooked, and the hunter vowed to control the coyotes, so it doesn’t happen again.

A good alternative, and even a better alternative to hunting coyotes is to trap the coyotes.  Why is trapping so effective. A trapper can go out and within a day or two have dozens of sets in place to catch multiple coyotes. The number of coyotes that can be removed in a short period of time is astounding. Also, these traps are working 24 hours a day. That is something hunters are not able to do.

They do not think they can do it; it is hard, trapping is unethical, and the list continues. You do not have to be magician to have success trapping coyotes. There are many publications such as The Trapper that has many good articles on tips to be successful, making sets, lure and bait use and the gear you need. Advertisers routinely run ads for the equipment you need to get started. There are even shows with the trapper in mind that are full of great tips.  One of the newest on the Pursuit Channel is Trapping Across America TV. This show will teach you a lot about trapping.

Another good option is to attend your state’s trapper’s convention. Every state I know of plus on the national level holds a convention. This a place for trappers to gather to attend trapping demonstrations, purchase gear, lures, baits and talk amongst other trappers. This is a great place for new trappers to purchase the items the need and even gather some great advice from the pros.

If you can’t make it to a convention, there are many great online sources.  A couple that I rely on is Sawmill Creek Baits and Lures. They have some of the best lures and baits I have ever used for coyote and any other furbearer out there.  For everything from traps, stakes, instructional books and DVDs and everything in between F & T Fur Harvester’s Trading Post has you covered.

If you do not already have the gear needed, do not think of it as an added expense. It is actually an investment. When properly cared for, trapping equipment can last a lifetime and will even pay for itself rather quickly through the sale of fur.

Coyotes are about the only furbearer that has had a good market for their pelts whether they are finished out or even sold on the carcass. Luckily, that appears to be the case at least for now and hopefully will continue for some time.

With trappers receiving a good paycheck for their coyote furs, their numbers are not as high as they could be without us doing our part to control the numbers. But still, there are plenty of coyotes still out there wreaking havoc on the whitetail population, birds and a many other critters and birds.

Coyotes will always exist to some degree, and they will always continue to kill. All we can do is try to control their numbers the best we can to reduce the damage they do. Thankfully, there are not as many of them out there to kill that there would be if they were not a valuable fur producer.

The problem is that there is not just very many trappers left. The younger generation is not stepping up to the plate like their ancestors did.

Maybe coyote trapping is not your thing, you do not have time to do it, you do not know how. Well, all is not lost. It might be easier to find a trapper than you think.

Even if trappers are not as abundant as they once were, they are still a very dedicated group. It is not hard to find a trapper looking for new ground to trap. Look on a trapping group page on Facebook and you will quickly find trappers in your area. Consider running an ad in a local paper looking for coyote trappers. Even a conversation at the local coffee shop is likely to lead you to a coyote trapper.

Animal damage control (ADC) trappers that are licensed by your state is another good alternative. They usually charge a one-time fee to set the area up and then charge per animal caught. This might cost a little money, but these guys and gals are professionals and will do everything they can to rid your property of coyotes. The advantage to ADC trappers is that they can trap in the off-season when it is illegal for regular trappers to set traps.

It is possible however for landowners to trap coyotes year-round themselves in many states. Most state’s game and fish departments will issue nuisance permits to trap coyotes throughout the year if the landowner is having problems with the animals.

Do not think that just trying to control the coyote population during the short trapping season will be enough. If you are in an area with a high coyote population, the battle seems to never end. Sometimes it feels like when you take out one coyote, two more move in. That is why it is so important to have a plan in place to work year-round to control the predators whether it is obtaining a nuisance permit to do the trapping yourself or hiring a licensed professional to do the job for you.

There is a lot of talk, and it will continue, about the cruelty involved in trapping. In reality trapping helps all animals and birds and cruelty is a myth. A proper catch will not harm any animal. The next time you hear somebody talking down on trapping educate them about the benefits extended to all animals through trapping, even furbearers themselves.

Good deer management includes a lot of things and one of them happens to be controlling predators. Whether you are an experienced trapper, just beginning or would rather have someone else do it for you, consider putting some traps in the ground. Deer, turkeys, quail, pheasants and many other birds and critters will be saved because of it.