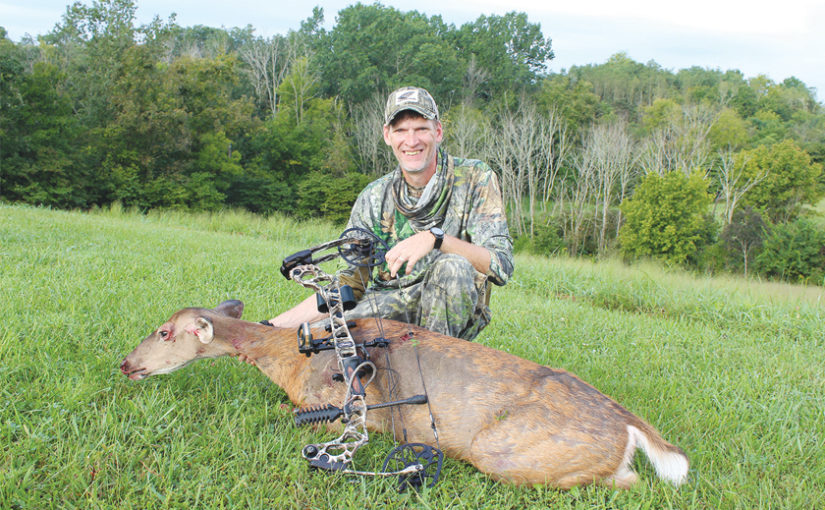 September first marked the opening day for Kentucky’s archery whitetail season. Like normal, I showed up at Central Kentucky Outdoors hoping to tag a velvet buck.  But, what I really wanted was a little redemption on a doe I had been after.

Kentucky is just a handful of states that provides hunters an opportunity at a velvet buck with one of the earliest opening days. Kentucky routinely begins deer season the first Saturday of September.  It just happened to be September first this year, allowing for a few days to hunt a velvet buck before the bucks began to rip the velvet off their antlers.

Trail cameras were showing a lot of deer, and some truly amazing bucks.  The kind of bucks that gets a heart racing a little faster than it should.

The bucks were mostly being seen in the evening just before sunset.  The high temperatures found the bucks going to bed very early, often before sunrise.  The does however were feeding a couple hours into first light so my goal in the mornings would be to hunt a doe I missed in the 2016 season on opening day.

This particular doe has had a rough life. John Braasch, owner of Central Kentucky Outdoors, bought the property five years ago and this doe was on trail camera photos then with fawns.  So, she is an old wise doe.

Throughout her life she has been hit by a car, became blind in her right eye and has had three close calls that I know of by hunters.  I was one of them.

I can’t say for sure how many does and fawns I had in front of me, but there were enough that I had to choose which one to shoot.  I brought my bow to full draw on a mature doe when out of the corner of my eye an even bigger doe caught my attention.

Looking out of the corner of my eye I instantly knew it was the blind doe that I had my heart set on.  Without letting my draw down, I shifted my body and settled my 20-yard pin tight behind her shoulder.

With the doe standing broadside, content on eating, I squeezed the trigger of the release and let an arrow fly.  With a loud thud the arrow struck home and the hunt was over.

Now, yes it was just a doe.  But, a doe I had a history with and she was the one I was hoping to get.  Every time that I would check in with John during the offseason my first question would be if the doe was still showing up on camera.

Upon closer inspection of the doe, we were able to get a better understanding of just how old she was.  In her mouth she had seven teeth and her ears were completely bald, not a single hair.

We can’t say for sure how old she is, but trail camera photos prove that she was at least 6 years old.  We are guessing she was closer to eight, maybe even nine years old.

A doe of this age is one of the smartest animals in the woods.  She is the doe that will teach other does and fawns how to survive.  She has surely busted many hunters throughout her lifespan, and even caused a few sleepless nights for myself.

I dreamed and thought of this doe as if she was a giant buck.  She might not be a buck dreams are made of, but she was a trophy in my books and I am proud to say I accomplished the goal I set out to achieve during the 2016 season when I first missed her.