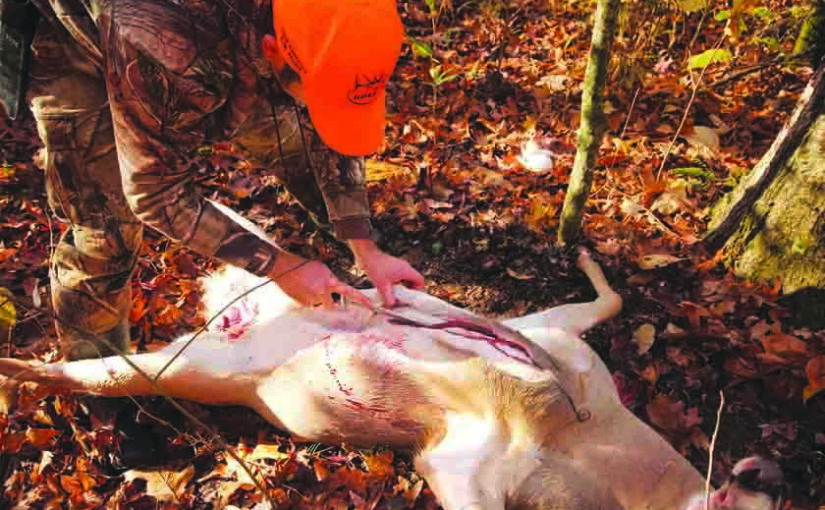 Stay out of bedding areas.  Most hunters agree that a buck, especially a mature buck, will find a new bedroom if it is disturbed more than a couple of times.  Do not trick yourself into believing you can sneak into a buck’s bedding area without alerting deer to your presence.

Even though it is often best to stay far away from a buck’s bedroom under most situations there is an exception to the rule.  Hunting public ground that contains highly pressured deer is one time I will risk the chance of getting up close and personal with a bedding area.

Contrary to popular belief even highly pressured bucks are not 100 percent nocturnal.  Instead, most of these daylight meanderings take place in close proximity, if not in their bedding area.  The only time you can expect to see these mature, pressured bucks away from the security of their bedrooms is during the seeking, chasing and peak breeding phases of the rut.  During this time, it is likely to see buck movement anywhere, at any time.

Most hunters do not travel further than one-half mile from the road to hunt. Over years, bucks that have survived past seasons begin to notice this pattern.  For that reason, bucks choose to bed deep into the woods.

On a particular piece of property that I hunt there is a small multiflora patch about 300 square feet in size in the middle of a cattle pasture next to a farm pond.  One day while fishing for bluegills I got a little nosey about all the deer tracks in the area.  After closer examination, I came to the conclusion that deer were bedding in the briars.  All they had to do was walk 10 yards to water and 30 yards to a prime food source.  For the previous 15 years I had been hunting the big timber on the property, but that day of fishing changed how would hunt it in the future.

With no trees suitable for a stand I went in several weeks before the season opened and placed a ground blind on the downwind side of a trail that leads from the pond to briar patch.  Hopefully there would be enough time for the deer to grow accustomed to the blind before bow season arrived.  If everything went as planned I would be able to arrow an early season buck as he took his water breaks during the still hot summer days.

For years I only looked at the multiflora patch as a tangled mess of briars as a walked to an oak flat.  Now it is one of my favorite site to hunt when the wind allows me to do so.

Sneaking into or very near a buck’s bedding area is the toughest part of this hunt.  If your stand is too close to the bedding area you might bump the deer before you even get to your stand.  Putting a stand too far away and you are defeating the purpose of hunting a bedding area.  When deciding where to place a stand, the direction of the wind, the noise you make getting to and from your stand, and the buck’s ability to see all factor in when you are deciding how close to get to a buck’s core bedding area.

Once a buck has been startled from its bed, it could take weeks before he feels comfortable enough to return.  To avoid ruining a hunt I prefer to scout and prepare my stands early in the spring.  If I spook a buck now he will have all summer to return, and they likely will.

If I have to scout and hang a stand very near or even during season I get it all done in one trip.  Midday is the best time to accomplish this task, and if at all possible do it on a rainy day that will quickly eliminate your odors or on a day when the wind is blowing to mask any noise you might make.  Carry your tree stand with you on your scouting trip so you do not have to go back after it and then return back to the area.

Just like when hunting, take precautions when scouting.  This includes practicing the same scent control you would use when hunting, being as silent as possible, and using the wind to avoid sending your scent into the bedding area.  The white “nubs” left behind after trimming shooting lanes are a no-no.  Keep the cutting of shooting lanes to a minimum.  Deer will quickly notice the disturbance.  When you do have to trim shooting lanes camouflage the white nubs by smearing mud on the tops, and make the cuts as close to the ground as you can.

Hunting the buck’s bedroom early as well as late in the season is a great tactic when hunting mature bucks when they are not traveling far from their bedrooms.  What about the seeking, chase and peak breeding phases of the rut when bucks are searching for does?  At this time of the season, mature bucks will be where the does are, often in doe bedding areas.

For me to be successful at killing a buck near a doe bedding area I play on his need to find does.  I place my tree stand 20 to 25 yards on the downwind side of the bedding area.  Even though bucks will be cruising very close to the edge of the bedding area, trying to catch the whiff of an estrus doe there is still the possibility that the buck could be even further downwind from the bedding area than where you placed your stand.  To combat this problem, I hang a scent wick soaked in estrus scent 15 to 20 yards on either side of my stand and a few yards upwind.  If everything goes as I hope, a buck that is downwind of me will catch the scent of an estrus doe that I hung about three feet off the ground, and turn and walk towards the bedding area.  This should prevent any buck from getting directly downwind of me and catching my odor.

I always try to place my stand within range of a well-used trail, but if I can’t for one reason or other it is not that big of a deal.  Once a buck catches the scent of a hot doe he is going to her whether there is a trail or not.

Another technique to hunting where does bed is to get in with them.  This is primarily a morning tactic. Trying to go in for an afternoon hunt will bump the bedded does. Well before first light I climb a stand directly on the edge, sometimes slightly inside the bedding area.  Keep in mind that if you do not kill a buck early you might have to hunt all day.  Getting down mid-morning will bump does.  However, this is the rut, and a big buck could show up at any time.

To put the odds in your favor of a buck showing up early, rather than later, use a drag rag soaked with estrus, and hang estrus-soaked scent wicks crosswind and slightly upwind of either side of your stand.  With a little know-how, bedding areas can successfully be hunted.