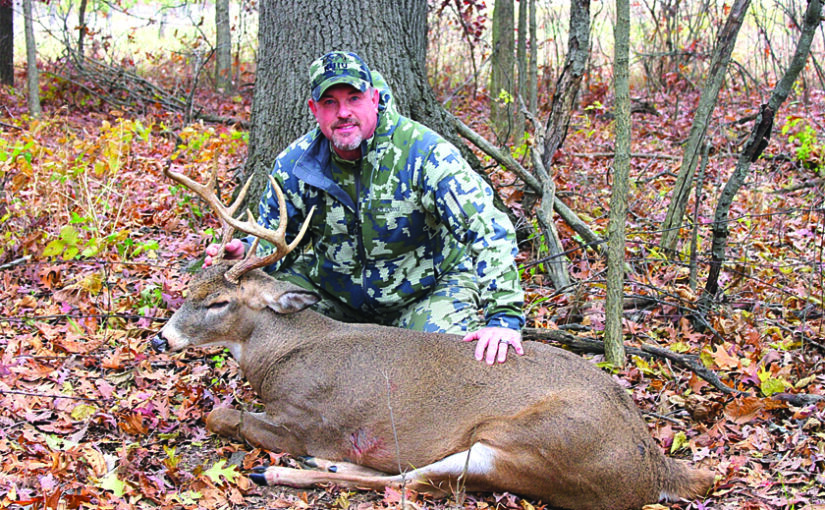 There Goe$ the Neighborhood

After brief contemplation, I sprang from the couch and grabbed my coat. “Where are you going this late at night,” puzzled my wife. “The rut has been delayed by over a week. That ghost buck has to appear this weekend,” I replied. “I’m running over to Jim’s to make some mock scrapes and rubs quick.”

If you’re wondering why I waited till the last minute: Closing out October saw my pointer and I racing back from out west with a cooler full of waterfowl and roosters. Mid-November, we’d be in Illinois doing the same. Swamped in article deadlines and honey-do’s, time and energy were the puzzle pieces I was missing.

Picking two different spots that Thursday night, twenty yards to either side of my stand, I dug up the dirt and sprinkled fresh doe estrus and buck urine throughout. Then I snapped a couple of branches and used my Robo-Grip pliers to peel bark on some puny trunks. This tried technique worked the prior year in the same spot, and I needed the advantage in this rarely traveled housing addition, where the bucks are stealth upon leaving the last protected parcel of hospital woods a half-mile away. The real bruisers never vacate it.

I sat home the next evening. “Pheromone Friday,” as I call it, was left for upsetting the visiting suitor. While Jim and Karen have seen as many as three bucks attend the ‘open house’ mixer in October, it boils down to a one-man job.

Saturday morning, I didn’t get to my stand until daylight, thanks to some spicey enchiladas the night before. During the rut, the does tend to hit this yard around 7:45 as the owner has the neighborhood’s best vegetation. It was now 7:30. From the truck, I realized the wind would be blowing northwest to a hot hangout across the road if the buck wasn’t already laying in the front yard’s brush. I drug some scent around the house and even doused the scrapes one last time.

It wasn’t a minute after climbing into my stand and releasing a quick grunt call that the young eight-pointer rambled to the backyard and sniffed the air. He grunted and blew back, stomped, then followed my scent drops to a quartering away stance just in front of a rusted family swing set that hadn’t seen a child in close to thirty years.

A twenty-four-yard poke accordingly to my Leupold Vendetta 2 rangefinder, I loosed the arrow.

A pumpkin-like thud echoed in the crisp November air as that buck chose a forty-five-yard semi-circle escape route to Dirt Nap, Indiana. Dirt Nap was a narrow-wooded stop-off located just fifteen yards from the bordering property and two yards from a clearing between that’d leave early walking neighbors mortified by the carnage.

Never mind skill or luck; I’ll take a heart shot any day. I gave thanks, made the necessary calls, and then dragged the 220-pounder back into the cover until help arrived. The haste cost me a cortisone shot to the left elbow, but I filled the freezer for another year. And no one saw a thing.

The word hospital derives from the Latin hospes, referring to a stranger or guest. I find it ironic then that a “not for profit” institutional development, willing to accommodate humans in need, can deforest hundreds of acres in wildlife habitat Strategically located against a significant interstate to its west. The next square mile east used to be a rural landscape dotted by a few older housing additions. Now the remaining three sides of real estate have become strip malls, medical buildings, retirement communities, and high-end apartment complexes. And somehow, developers have managed to shoehorn in two hotels outside my neighborhood.

We call that type of growth ‘urban sprawl,’ and its congested effects can be felt in more ways than traffic and property tax increases. Bewildered wildlife is creating crop and garden damage and causing accidents on local roads. Just when I thought I was exempt last fall, a doe bolted in front of my F150 on my way to a haircut.

Habitat ‘fragmentation’ occurs when continuous areas of habitat become disconnected by natural or human causes like I just mentioned. This fragmentation generally leads to small, isolated patches of ‘hospitable’ habitat for animals in wooded areas speckled throughout housing subdivisions like mine.

However, smaller habitats cannot support displaced populations (known as its ‘holding capacity’), which are at greater risk of inbreeding and local starvation. An influx of rabbits, squirrels, deer, ducks, geese, and turkey are just the sporting game seen perusing our yards. Adaptability has been the hallmark attribute of these species, especially the whitetail, considering the absence of any modern-day predators in my area.

In the name of conservation, then, such dilemmas present opportunities for hunters if the neighbors oblige. My county subdivision is not the place for this endeavor. However, the next one over is. It’s an older development containing nineteen wooded lots of two-to-five acres apiece. And while most of those owners balk at the hint hunting, I found one elderly couple willing to let me bow hunt their five acres if done with discretion.

I felt I owed the adjacent neighbors that saw me sneaking about an honest explanation and verification I had permission from Joe and Karen. When I told them, I was an educator who obeyed the laws, wasn’t a head hunter, and fed his family all year off these harvests, they understood, and some began waving when I passed by. I also got their permission to extract any game that ran onto their property.

Responsible hunters are one of the best conservation management measures used to ensure many species numbers are kept in proper balance. And as the hospital across the road keeps churning land, two whitetail herds needed a thinning out. Over the last three years, I’ve taken two bucks, several does, and a turkey from a hunting blind and tree stand. Both setups are less than thirty yards from the owners’ white two-story house.

Across the street, a former homeowner, and hunter himself, was breeding pen-raised turkeys. This experiment attracted a wild rafter of birds that stayed on after selling his home in 2019 and pulling his poultry pets. Acclimated to folks walking their dogs, the flock became a novelty, like the foraging deer cycling a predictable pattern each day.

The adjacent property owner is an elderly man who lives in a shack on the backside. Garnished with a large pond, thicket, tall grass, and pines surrounding the acreage, wildlife has all the necessary shelter provisions. Aside from the ‘tom’ I took two years ago on my permitted side of the street, I surmise someone else secretly poached off another male to the disdain of Anson. In broken accent, he lamented the taking of one of friends. Once welcomed onto his property, my friend no longer knew me as dementia set in, and my visits to check on him were now seen as intrusive.

Developers out of Boston had finally struck a lucrative agreement with four landowners to buy up the side of the street I was hunting. After taking a buck in October 2019, I knew I had one more chance at the remaining tom, now escorting two hens around the block, come spring. Then the stands would need to be pulled.

By late April, commercial brokerage signs were coming down on some of the lots, and when I checked my tree stand, it had been painted with red XX’s to be cleared for powerline servicing. Heavy equipment tore up my friends’ yard and boundary lines were marked for another apartment complex building project.

Setting against the base of this tree, I witnessed that mature trophy gobbling back to my slate call. Then he spooked and vanished. Though it wasn’t his property, I thought about Anson’s melancholy spirit. I thought about the last three birds standing, and their habitat loss would soon be felt come summer excavation. “Live and let die,” I thought to myself. Then I got up, pulled my stand, and never returned.

Developers with deep pockets won again. Wildlife and sportsmen lost again. And there goe$ the neighborhood.