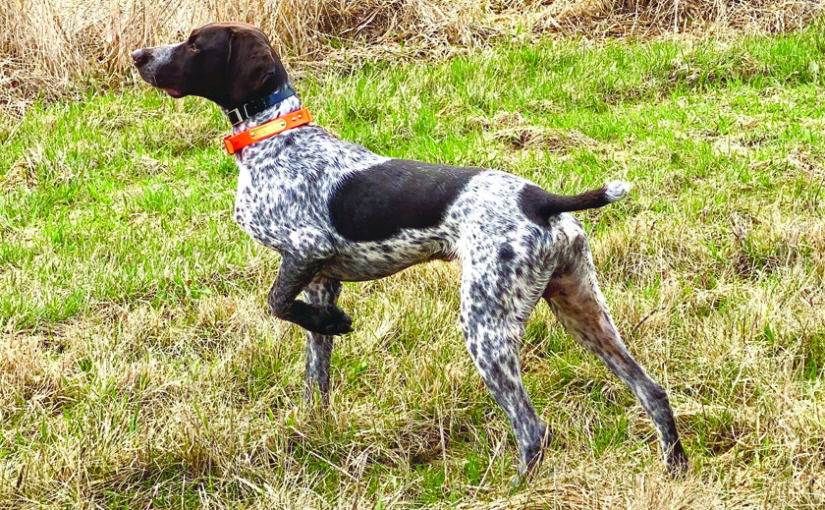 I cannot imagine a greater growth period in a hunting dog’s life than his or her second six months. They double in size, strength, understanding, and moxie. This installment is part two of a four-part series following a new owner’s two-year journey towards effectively raising his German Short-haired Pointer. Gundog wisdom is collected over time, that is why the tips and strategies I’ve penned must be noted as such. A reflection of dedicated sportsmen whose passion for their companions naturally spill over onto the brotherhood of huntsmen less equipped. If one signs up willingly for this apprenticeship, the payoff is rich, and paying it forward will surely present its duty.

Right between six and seven months Stohon started getting aggressive and his pouncing and biting at the ladies was overwhelming. All in good fun, for him that is. A little research told me Stohon was undergoing a testosterone boost and now sexually mature, despite his real surge returning at two years of age.

Making matters worse, Lion County Supply’s Steve Stiner reminded me that roughhousing Stohon might be great for his motor-skill development but confusing him when performed inside. “Pups only understand good or bad behavior based on your commands. There’s no in-between. Shock collars work well for negatively reinforcing unwanted behaviors such as getting on the couch, bed, or countertops. However, it becomes an inhumane training tactic when you are punishing him while sending mixed signals about aggression,” said Stiner. Most of our real tussles happen outside now.

After a month, Stohon learned to manage his hormonal surge as the wave wore off. Owners can aid this transition with frequent exercise to burn off excess energy and keeping to a tighter training regimen. “Boredom equals trouble, and just like toddlers, dogs need and respond to a consistent routine,” reminds Stiner. Unless you have good acreage with some sort of fencing, fit a morning walk in before going to work. On weekdays, my wife does morning and I do evening shifts. GSPs need run several miles a day.

Closing in on 11-12 months, Stohon’s surge was back. Each morning in the kitchen I was met with a snout thrust below the belt as my coffee flew through the air. Two chest lunges were landed before I could attempt a block. I felt trapped in SNL’s Night at the Roxbury skit. If only it were that funny.

Despite some handlers’ belief that you don’t start force training until beyond eight months, my dog needed it. The Wonder Lead collar I spoke of (Part 1: 0-6 months) soon gave way to the Garmin Sport Dog E-Collar, and in two days out Stohon responded beautifully to judicious stimulation associated with commands and positive reinforcement. Now I rarely need to stim him as he pleasures in obeying my verbal ques.

As for retrieving? Don’t get discouraged if your pup retrieves in the house but not outside. After three months of getting upset with my dog and feeling like a failure, Stohon came the same-page one day and we never looked back. Many gundog owners I’ve spoken with reassured me with their own stories that your dog will retrieve. But like humans, they all have to figure it out their way.

Running the woods in exploration is as important as your dog learning field commands. The smells and motions of wildlife will be a sensory overload to your pup and he might just head into brush unknown for a rabbit or robin. Many a gundog have come up lame or dead, impaled by sticks, metal stakes, and rusted farm implements. Treat your investment with an LCS Safety Vest 2 from Lion Country Supply. The material is thick, even tougher down the skid plate, and larger cut armholes and non-binding clasp straps will eliminate rubbing while protecting your dog bumping the fields.

There are varied camps of opinion about when to start a pup hunting. The common denominator has to account for your dog’s readiness. If he doesn’t listen on ordinary commands or is shy to noise, hold him back awhile.

Originally, we worked on some basic scent retrieval exercises using bird wings and a check chord. The goal was to progress towards live birds under a step-trap Stiner gave me. Not breaking rank here, but opportunities opened doors we couldn’t pass up.

At New Years, Stohon was right around 7 months when I traveled to Virginia, covering a story for Primland Resort. Kept on a leash, I brought him along to ogle the guide dogs working those milo-sorghum patches, and Stohon got an eyeful, earful, and even the chance to mouth a few birds. The gunfire did not faze him. Listening for rooster cackles at each parcel stop, Stohon soon learned those heightened sensations were legitimate responses as he began backing girlfriends Kitty and Sassy on points, tail stiff.

In February, we visited my friends at Thornbottom Preserve in Ohio. Owner’s Brad and Ann Dysinger insist field reps are the best training. Scott Williams, my guide, had this feedback, “Stohon was well-mannered, assured, followed the other dogs in proximity but hunted for himself, backed the dogs on point, and tried to make some retrievals by the end of hour three. He’s gonna’ be fine.” It was welcomed progress over field outing one.

The Covid-19 scare was sweeping the country by March. I wanted one more outing for Stohy, now 9 months, before preserves shut down for the spring and state governors put us on lockdown. We visited Winghaven Lodge in Kentucky on assignment and owner Russell Edwards offered unlimited shooting for the day. The first hour testing Stohon’s command and retrieval skills was productive with some concessions. Ten flushes and five returns without coaching wasn’t bad for the new kid in the candy store. Then we kenneled him to run a couple of (guide) Shane’s dogs till lunch.

In the afternoon, Shane and I had not gathered our gear before Stohon located quail forty yards off from the truck and froze stiff on point. He held on “whoa,” flushed on command, retrieved to hand, and thirty-five more flushes in the next two hours told us we had a monster hunter waiting to be ‘finished.’

The bottom line here, repetitions on live birds are the answer. But they need to be coupled with consistent, intentional commands if your dog is to benefit. Young pups are going to goof up and blast through a covey in the learning continuum, however, not holding point soon becomes unacceptable.

In a recent conversation with Tom Dokken, of Dokken Dog Supply, he put it this way, “Coyotes instinctually locate and point birds before pouncing. They learn soon enough that flushing through the fields gets them no reward. Unlike some other breeds, GSPs have it in them to point, flush, and retrieve, but Stohon must first master the point. He’ll figure out on his own that nothing beats a bird in the mouth.”

With summer soon approaching and the pandemic shorting live bird supplies, we went back to decoys. Dokken Dead Fowl Trainer makes the best there is. “We developed a hands-off approach in our dummy design,” instructs Dokken. “A soft body is what a dog wants to grab. We make the head and tail hard to discourage extremity grabs. Secondly, we want your dog to not shake and rip up the bird upon retrieval. A smack to the snout by a hard-plastic head or tail fixes that issue quickly. They train themselves.”

Besides a realistic painted form, replicating the accurate size and weight of various game birds make transitions to live birds more successful. An open-cell foam torso allows me to inject scent throughout the duck, pheasant, quail, or grouse dummies for honing olfactory senses.

Remember new gundog owners, no matter what training exercises you endeavor, take the pressure off you and your dog by making it fun. Relax, he was bred for this and you’ll get where you want to be soon enough.

Rapid transformation happens between 7-12 months. Stohon’s jagged rat teeth were replaced by a thick, almost gator-like secondary set. Along with whiskers, his head grew into an anvil shape, body lengthened, chest deepened, and sinewy muscles pronounced upon flexing. Weight climbed steadily from 35 pounds in January to nearly 60 by summer. His overall strength and propelled speed doubled.

Puppies should be fed on a regular schedule, and any excess food that has not been eaten in a short time frame should be removed. Early on, and as exercise and general activity increased, I upped Stohy’s feed to 4 cups of Pro Plan Savor split between morning and evening feedings. Savor offers probiotics for digestive health along with Vitamin A and linoleic acid, an omega-6 fatty acid, promoting healthy skin and coat.

Towards the end of his first year we switched him to 4 cups of Pro Plan SPORT Performance, and have yet to go to a one evening feed as some handlers do. SPORT provides a 30% protein to 20% fat ratio, helps optimize oxygen metabolism, is rich in antioxidants, and the EPA and glucosamine help joint mobility for running, crouching, and jumping movements.

While I was worried about stacking weight on my pup, a false health concern, Nestle Purina’s Karl Gunzer assured me that “Stohon’s hourglass shape, with a little rib showing, is on par for where that GSP breed needs to be at this active stage. The amino acids in a Pro Plan diet will nourish his muscles and help him recover.”

For hunting dogs, you must check for ticks and burrs, besides inspecting their paws and webbing for cut cuts or thorns. Observing profuse licking or chewing habits are a sign something is wrong. Musher’s Secret makes a great paw balm and I suggest a good first-aid kit be kept in the truck. One of these days you’ll be patching, maybe stapling, Mr. Velvetears in the field. And remember to keep their flea/tick and heartworm meds up-to-date.

If this article helped in your understandings and decision making towards owning and raising a German Short-haired Pointer, check out part 1: 0-6 months from March 2020. Looking ahead to part 3: 13-18 months (March 2021), I’ll be delving more into the history of this breed and updating you on 3-4 wild bird hunts scheduled for this fall.