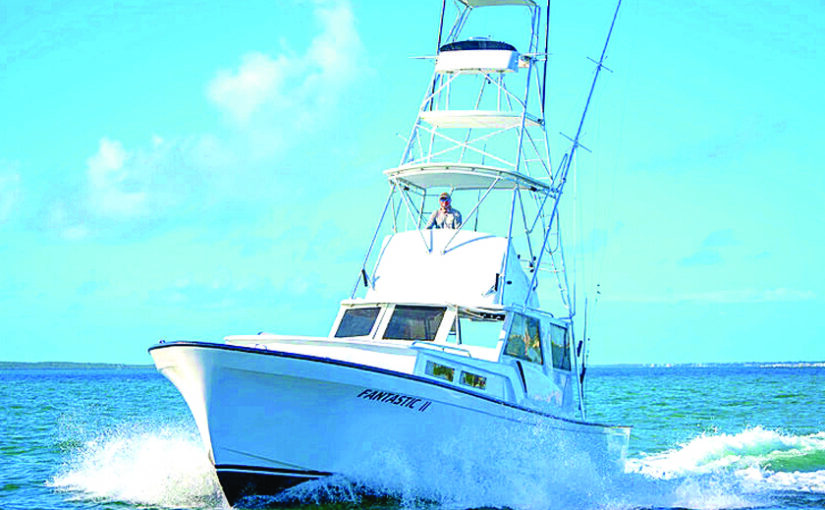 Trolling for seafood isn’t everyone’s cup of tea. A long day rocking the waves requires a good skipper, the right boat, and often Dramamine. Polarized glasses, long sleeves, a neck gaiter, brimmed hat, and sunscreen for anything else not covered up is essential not to realize a bad burn. If you need babysat, don’t go deep sea fishing. Mundane information to the avid fisherman, I’m just giving dreamers a heads up.

Ready for adventure? I have your crew, and they’re nice guys.

I met the Hopper bunch at the Indianapolis Boat and RV Show in 2019. The Covid craze erased everyone’s plans for travel in 2020, and it’d be two years till we could finally hook and reel this trip into reality. This June, a buddy and I rambled into the Key Largo/Islamorada area, looking to put a dent in the mahi-mahi population.

A Key Largo resident going on 41 years, Justin Hopper has seen it all. At 51, the tenacious skipper of the Fantastic II has been boat-ratting since he was fourteen. He started chartering in 1984, later procuring his captain’s license his senior year of high school in 1989. Then it was full steam ahead.

There are currently two boats in his fleet service. The Fantastic II is a forty-foot custom Sportfisher, loaded with twin diesel engines, four fish fighting chairs, and the latest electronic navigation and fish finding equipment. His son, Dallas, has been operating the smaller Hop Along for the last three years. This twenty-six-foot custom fiberglass open fisherman dons a single Yamaha 250 engine and all the latest technology. “Dallas has essentially been chartering with me since he was twelve,” says his father. “This kid has the innate skills most only dream of. The ocean life comes easier to him.”

Hopper Senior is feeling the years like so many other guides in the Keys. The mind is willing, but the body takes a beating on the open seas. “Keeping the boat in prime condition for my clients, mechanically and cosmetically, adds extra hours once they leave the marina happy and hungry,” informs the captain. “Fishing days on end with little sleep levies a toll charge that can be quite challenging.” Nevertheless, Hopper isn’t resigning any time soon. This Largo lifestyle is addictive; 300 days so, and he still loves it.

Do You Know the Mahi Man?

As for what he does best? Besides keeping a spotless vessel, the skipper says he’s all about the mahi fishing. “Dorado, dolphin, mahi-mahi … whatever you want to call it … it’s our passion here. We’re very hands-on, use live bait, and the tuna tower’s twenty-five feet of height provides us with the extended sight opportunities needed to locate fish. Not everyone can say that down here.”

Our charter saw us navigating the gulf stream waters twelve to fifteen miles offshore. At depths of 400-800 feet, trolling wasn’t bad once we got through some rough currents. Of course, it helps when the crew are talkative and pleasant, and no one is pretending that part of the marketing is easy either. Justin’s information and outlook were sincere.

His deckhand, Allen Barr, was young and fit and kept conversations real while glassing ahead. The stamp on his calf evidenced a transplant from Georgia and his pride for the Bulldogs. Living on a houseboat in the same Marina he works, he and his family experience vacation daily.

Four different stops produced nearly two dozen landings, despite us releasing half the fish. Younger schools often hit fast and furious, and the stern rigs can be overwhelmed with action. “In addition to live bait like herring, pilchards, or goggle eyes, we use light tackle skipper feathers,” says Barr. “They look a lot like the flying fish we’ve seen scooting over the waters today.

Big fish like wahoo, tuna, and sailfish also love the blue runners (or hardtails) for their heartiness and vibrations made in the water. Known as the “poor man’s goggle eye,” this eight to fourteen-inch option is good for kite fishing, where the object is to keep live fish on the surface for ferocious eating predators like the mahi.

Dorado is the fastest-growing wild fish species, often in two-inch spurts a week, and can reach four feet and forty pounds in that first year. Sexually mature at three months, it is easy to see why the fast-swimming, hard-fighting mahi haven’t been endangered. Good snags will run twenty to fifty pounds and fifty to seventy inches in length, yet it’s the five to eight-month tikes that make for better eating. Our keepers ran twenty to thirty inches, five to eight pounds, and provided plenty of delicious grub for the week.

In March through May, spring targets are snapper, black and red grouper, and blackfin tuna. You could run into some amberjack, barracuda, and shark seem to peak at this time.

Moving into summer, it is mahi, mahi, and more mahi May through late September. Plan on tapping some wahoo, bonito, and yellowfin tuna. Here’s your chance at a marlin or swordfish, and many a guide can spin tales of tying into some breathtaking action here.

September through October ushers in the fall season, which looks like wahoo, tuna, and mahi. When the water temps drop below eighty degrees, snapper and grouper circulate back into the mix.

Winter brings sightings of billfish, starting around November and seeing sailfish running hard through early March. The chance at a marlin is rare. King and Spanish mackerel, yellowfin tuna, wahoo, snapper, and grouper are still on the menu.

Grubs, Pubs, and Lodging in Islamorada

Cooking delectable mahi is super easy, and versatile dishes look like boiling, grilling, frying, or baking your trophy and serving over rice or risotto, or beans and vegetables. My favorite is grilled and blackened with potatoes, and some hollandaise, dill, or remoulade cream sauce drizzled over it.

On that note, most restaurants in the Keys offer a “hook and cook” menu option for fishermen. For twelve dollars, you’ll get the fish prepared to your liking with two healthy side dishes. The much-celebrated Lorelei’s Restaurant and Cabana Bar in Islamorada was literally out our hotel’s back door, so we parked ourselves there most nights for a great water view and live music.

There are plenty of places to eat in that area, and everyone serves booze. Tower of Pizza offers a welcomed slice of Sicilian for the upper east coast visitors. The Islamorada Fish Company sets in the World Wide Sportsman complex, owned by Bass Pro. A great spot to shop, see a replica of Hemmingway’s boat ‘Pilar,’ grab a drink, and eat. Located between Key Largo and Islamorada is the Blonde Giraffe Key Lime Pie Factory for dessert.

Accommodations can be salty in the Keys, no pun intended. So here’s a plug for the sister properties Key Lantern and Blue Fin Inn. Many rooms come with a full kitchen, tableware and cooking utensils, and two queen beds. Well past its prime, you won’t find luxury here, just a clean room to call home after fishing your butt off.

A Fisherman’s Mecca, not Resort Destination

I already mentioned the World Wide Sportsman store in Islamorada. It’s a fisherman’s paradise and a must-see. Although every other store seems to hold some gear and apparel, the Tackle Center of Islamorada appears to be the stop-off for locals in that area. We visited twice, and the workers knew their stuff.

We fly fished for tarpon on a smaller, separate charter and came up empty on another day. I now understand why spotting these trophies is one thing and hooking one is another. But getting the photo beside the boat is an entirely different and rare experience.

Bud-n-Mary’s Marina was another local hangout for fishing alongside the bridge. Folks wait in hope for the monstrous tarpon, some seven-foot-long, to stray from the docks where commercial operations clean fish. We gave it a spin-cast to no avail but ogled spectacular explosions from the turquoise waters.

Beaches are almost non-existent if you’re a sand lover, despite what anyone tells you. So how can the tourism media market this when you see ocean ten yards over one shoulder and freshwater across the street? Most of the drive down the Keys is that narrow. The sunsets over glass waters? Now they’re unbelievable.

We ventured to Library Beach on a tip and were quite surprised. Not by the Warning Sign for American saltwater crocodiles, but rather the ten by fifty yards of poured sand. The mangrove-laden brackish waters held a couple of manatees, and the highlight was petting them as they swam close. A gigantic and hardened baked potato is the only way I can describe the look and feel of these unique creatures. Egrets and pelicans are beautiful and regular sightings here.

It has been decades since I’ve visited Key West. Blown up with modern offerings, I still recognized much of the same historically. If you enjoy Ernest Hemmingway’s works, then a stop to his 1930’s estate, now museum, is another must for sportsmen. Inside the home, you’ll bear witness to his literary achievements and photos of famous friends, African safaris, and saltwater marlin conquests off the island coast extending to Cuba. Those notorious polydactyl cats (possessing more than the normal number of toes) still breed and roam the property.

You might brag you’ve made it to the southernmost point of the states, but you won’t say that about the beach life there either. The wash-up on the rocky shoreline creates a stench you won’t forget. If nightlife is your bent, you won’t be disappointed, but don’t bring the kids into certain portions of the downtown.

The Cuban influence on architecture and cuisine was evident. We ate at El Meson De Pepe in Mallory Square on Wall Street. The street performers outside weren’t my thing, but a great cigar and live music were. In an authentic setting, we enjoyed some delicious dishes.

Figure an hour and a half drive from Islamorada if the traffic is cruising along. Empty police vehicles line the highway for appearance only during the heat of the day. Allow two hours on your way back as nighttime speed limits drop to 45 mph along this constricted travel corridor.

Fantastic II can accommodate six guests; Hop Along fits four guests. Rates range between $500 – $1500 per day and guarantee fish! Typical departure times are 6:30 a.m. for daytime trips and 10 p.m. nighttime trips. Wheelchair accessible as long as your chair and occupant can be loaded and unloaded off the boat. Fantastic Charters will split groups but encourage you to book with family and friends for a unique experience.

or email AFANTASTICHOPPER@GMAIL.COM for booking and additional information.