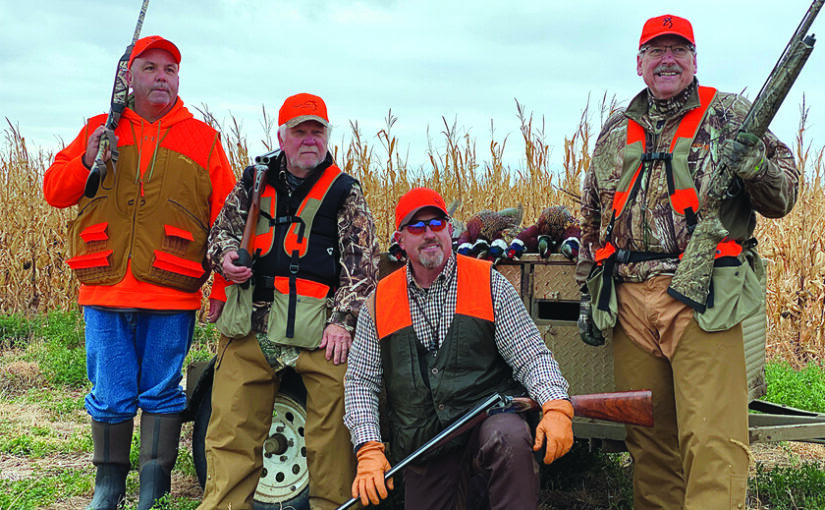 With two handlers strategically staggered between three hunters, the lead guide makes the nod to proceed. “Hunt ‘em up! Hunt ‘em, hunt ‘em,” instructs Brandon. Stohon, my rookie shorthaired pointer, joined three vivacious labs; blacks Red and Tucker and a yellow Sadie to which my youngin held a crush. As the crew frantically zig-zagged through cornstalks towering ten feet, rays of sunlight illuminated these golden jail cells that seem to extend to eternity.

“Hen, hen, hen. Don’t shoot,” interrupts our concentration. As adrenaline floods your body, you take a deep breath, look to either side for fluorescent orange, and reset your cadence. A quail-like whistle precedes my command, “Stohy come!” Amongst the cacophony of rummaging, “Cookies and Cream,” as the neighbor girl calls him, checks in before ramping back up.

As diagonal beams of neon yellow were intersected by trotting gamebirds ahead, the iridescent hues of Kelly green, violet, and fiery copper tones refracted like an intermittent strobe. The anticipation of harvest now becomes intoxicating and you don’t want to blow it. With each stride, the sounds of crunchy leaves zipping across your waxed vest and boots suctioning off the mud beneath echo between your partners.

Whoomph, whoomph, whoomph, whoomph, drummed to my left. “Roos-ter,” exclaim the guides. I spun to locate the flush behind me and squeezed off the finishing shot to a Virginia man’s first boom. Senior Dennis Mailhot claimed our first bird today and the action was about to get crazy.

This IS South Dakota

It’s no secret unless you’ve lived in a cave for decades. South Dakota is the Holy Grail for ringneck hunting, thanks to excellent habitat and painstaking conservation & management efforts. Home to more than 7.1 million wild pheasants, it consistently rests atop all rankings for bird counts and harvests as North America’s premier trophy destination. In 2019, hunters bagged 829,501 birds during the pheasant season. In 2020, the traditional season opened on October 17 (I arrived on the 19th) and ran through January 31, 2021.

Unlike many states, South Dakota welcomes non-residents with open-arms as sports tourism pays the bills. According to the 2019 South Dakota Pheasant Economics Report, non-resident hunters attributed $130.1 million (or 64%) of a whopping $202.4 million influx to local economies.

While the majority of land in South Dakota is privately owned, land access is managed through various programs such as Walk-In Areas, the Conservation Reserve Enhancement Program, and politely knocking on doors. Yes, you can find birds statewide, but the eastern two-thirds hold the lion’s share of the population where AG crops, wooded draws, wetlands, and set-aside acres abound.

Brule County claims one of the state’s premier locales at a density of 200 pheasants per square mile, far better than others. “Our CRP program is strong here. We’ve been able to reduce soil erosion, enhance water quality, increase hatch rates, and hold birds throughout the hunting season. Our strip plantings of sorghum, milo, and corn, with proximity to lakebeds and sloughs, are ideal tracts for the entire life cycle of our pheasants,” says Toni Korzan, owner of Dakota Prairie Lodge. “Some of the shelterbelts, like the dense cedar strips you hunted, Scott, provide a great escape from wet fields and heavy snowfalls.”

A Style of Their Own

If you’ve never experienced the strategy of a driven hunt, that is, a line of dogs and their handlers methodically pushing a field upwind, one parcel at a time, until it empties both coveys and single runners, you need to. While there are kick and shoot naysayers to the technique “It’s not hunting,” or “It’s too dangerous,” many of those folks have never crossed over this midwestern border to try the longstanding tradition dating back to 1919.

A pheasant’s strategy is to first hide, then run, and escape by flight. When a dozen birds flush at once, there’s just no way to drop them all. Many outfits will rotate huntsmen down the cornrows and grass tracts to even out the action and its bounty throughout the day. Walking the edges one-hundred yards ahead, flankers help contain against jailbreaks. With blockers posted up downwind, we’d reach the end of each agricultural expanse, and eruptions of exotic fowl and fireworks filled the sky. Meanwhile, Stohon and his gang of newfound friends retrieved at a breakneck speed amongst the commotion.

That first afternoon I limited out end blocking on just one drive. The sounds of four hunters and two guides trampling forward sent several hens and one cock out to my right. Aiming to his front half, I swung through and I dropped him at twenty-five yards with my Dickinson Plantation 20G side-by-side. No sooner had I reloaded #4s, I spun back to my left and took a double at ten ahead and twenty yards further out. Not thirty seconds behind flushed three more roosters as I waved them a safe flight.

Dakota Prairie Lodge and Resort is located in Kimball, South Dakota, just two miles south of I-90. Owner Toni Korzan opened the business in 2013 after moving back to her hometown from Maine. “I wanted a unique opportunity for my children to work alongside me on the family land. As a girl I’d help flush birds for my father and six brothers because we didn’t have hunting dogs per se,” she laughs. “So, it seemed like a cool idea.” That simple answer seems a bit unfinished from a gal who graduated from MIT with degrees in Chemical and Nuclear Engineering. But if you met Toni, you’d agree; she simply pursues and conquers what she sets out to do, in a pleasant manner that aims to serve others first.

Not your typical western log cabin, Korzan designed the lodge with a “home away from home” feel. Offering an open concept for entertaining both upstairs and down, handsomely appointed fixtures and furniture meld with various seating configurations so multiple groups can share the 15,000 square foot facility. Poker, pool, and ping-pong tables round out the fun. Ten bedrooms (each with private baths) sleep four persons apiece.

“While first-time hunters are sure to be pleased with our accommodations, the camaraderie formed between groups around the country have now blossomed into yearly reunions,” says Korzan.

This resort is dog friendly and Stohon stayed in my room. While guests should bring a portable cage, Toni offers the cleanest kennels I’ve ever seen.

You heard that right. Your job is to get there and back home. If flying commercial, you’ll want to use Sioux Falls Regional Airport (FSD – 2 hrs. away), and Mitchell Municipal Airport for private commutes (MHE – 45 minutes away). If your schedule allows it, rent a car and make the three-hour drive to Mount Rushmore at your own expense.

From mid-September to mid-December, hunters can double up on game by enjoying a duck/pheasant combo package for $1200 per day. Morning migratory duck hunts over the “prairie pothole” depressions have put this state on waterfowlers’ bucket lists. According to scout patterning and winds, our guide Mark busted tail to set us over a different locale and group of decoys each day. Sandwiched between two Virginian jokesters, Dennis Mailhot and Doug Gerek, we limited out all three mornings.

Come prepared to dress in layers as your day in Utopia may start at 20 degrees (even in October) and heat up to 65. And new for 2021, if you love doves, DPLR will be offering a dove/duck combo hunt running mid-September to mid-October. Time to book it!Contact Toni Korzan at 855-735-6343 (SD-LODGE)