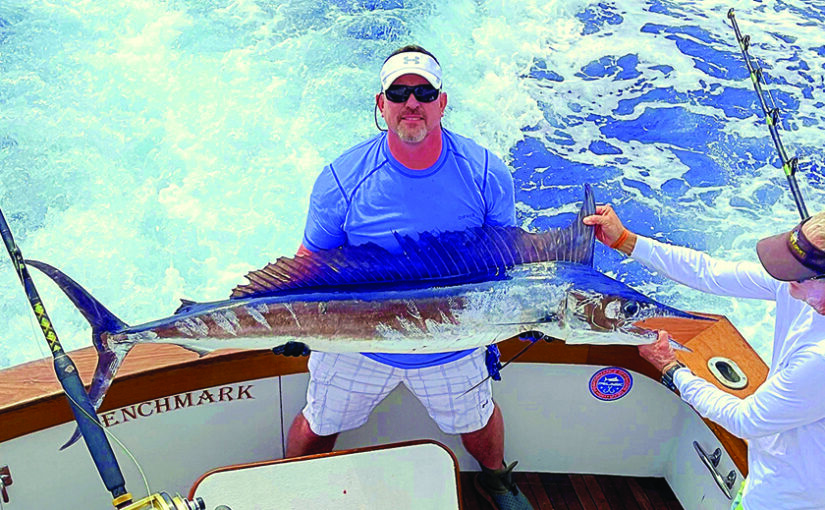 I am nodding off, and Chip yells, “Fish on!” Coming to, it takes concerted effort to buckle into the fighting chair and begin reeling. “Hooked on the ‘Stinger’ reel!” shouts the captain. “He’s at 530 fathoms and rising.” Then Donato leaps down from the bridge, reconfiguring the outriggers and pulling the dredges.

Five minutes of rigorous winding wouldn’t mention except for nausea I have experienced the last six and a half hours waiting for this chance. Each upward thrust is forcing the sweat out my pores. Two surface hops closer to the stern, and the crew surmises we have a spearfish online. Once a “spear” knows it’s hooked, it will often reverse direction and dart straight towards you. The key, for me, is not to lose that line tension.

After a short struggle, Chip has it gaffed and lifted from the sea. The initial thud, followed by thrashings against the teakwood deck, is blurred imagery at this point. Adrenaline seems limitless amongst the crew, and our catch is now on board the thirty-seven-foot “Benchmark.”

I am now unbuckling from the swiveling seat to thrust my rod into a holder. Shock and awe will wait as my equilibrium pendulum with the waves. I hang myself over the Merrit vessel and reset my stomach. For this next minute, the world seems silent.

As I stand to my feet, my senses clear, and my wits sharpen. “Would you look at that?” I beam. “You’ve landed yourself a spearfish, my friend. A rare treat and fantastic eating,” exclaims the deckhand (later realized as legendary skipper Chip Van Mols). “Serious anglers dream most of their life about this guy to round out their billfish slam,” adds Captain Chris Donato with a handshake. “Congratulations on your trophy. It’s been a rough day.”

Spearfish fully mature by age two, and this shimmering male, juxtaposed against the cinnamon floorboards, is unmistakably older. With a pool of crimson collecting around the head, his nervous system no longer signals his cells to flash those brilliant golden-bronze hues we find so cinematic. After his rinse, I quickly hoist the trophy for photos while Van Mols lifts his translucent dorsal fin, still lavender in the sunlight. My regret balances my euphoria, yet God permits a judicious harvest, and this sustenance will not go to waste.

Spearfish are marine fishes of the genus Tetrapterus, family Istiophoridae (order Perciformes). The shortbill, or short-nosed, spearfish (T. angustirostris) is a Pacific member of the genus. The species T. belone is the Mediterranean version of billfish. Both are considered a type of marlin. Data on this species is limited, and ocean biologists believe that few fish live past three years and possibly four or five.

While strays can be found in the Atlantic Ocean, these migratory apex predators mainly reside in the temperate and tropical waters of the Mediterranean and Pacific Oceans. Mesopelagic spearfish travel the warm currents along the continental shelves, hunting smaller fish and cephalopods towards the surface of deep water.

Kona, Hawaii is one of the top billfish destinations globally, and with shelf drops of 1,000 feet within a mile of shore, scoring any species in the marlin family is an achievable feat if you put in the time. But landing a spearfish takes a little luck, in many opinions. Worldwide, most are accidentally hooked by anglers or netted by commercial fisheries targeting tuna.

Common to all billfish are their long narrow bodies and pointed bill (or rostrum), used for stunning or cutting their prey. With overall colors and striping resembling a marlin, a dark navy-black band across the upper part of the fish, and a silverish-white color below, anglers often mistake their sightings.

Shortbill spearfish distinguish themselves from other relative species of the marlin family in several ways. Their lightweight and lean bodies (seen in this article photo) rarely reach above sixty pounds, more common in the thirty-forty-pound range. The consensus between the three of us on board was a catch somewhat over fifty pounds. The world record is 115 pounds.

The smallest species of the marlin clan, spearfish, can reach lengths of ninety-one inches, but most fall far short of seventy inches. At seventy-nine inches, then, I realized both a rare fish and trophy specimen.

As for nomenclature, they have the shortest rostrum amongst all other billfish, barely longer than their lower jaw. Longbill Spearfish, however, exhibit an upper bill roughly twice in length to its lower jaw. Marlin breeds (white, striped, blue, and black) and sailfish run longer yet, with swordfish possessing bills reaching half their body length.

Further distinctions lay in dorsal fin proportions and color. A spear’s dorsal fin will run over fifty percent of its body height, higher than a marlin’s dorsal fin and lower than a sailfish. Colorization can be quite dark folded up and a translucent bright blue or purple when at full sail, with no spots like the sailfish.

The Eb and Flow of Island Expectations

On my bucket list was the marlin, preferably the Blue or the Striped. In February, I contacted Captain Chris Donato of Grander Marlin, out of Kailua-Kona, Big Island Hawaii. He was realistic about my available time frame of late March. “While anglers can see more action during the summer months, you don’t always see the sizable trophies you can during March. Winter billfish tournaments are over now, but the weather’s been bad down here. It always seems to turn around, and if the females are mating, we could run into some specimens well over 1,000 pounds.”

In truth, we almost bailed from the trip, as Hawaii’s Governor had tourism handcuffed globally. My wife and I NAAT Covid tested seventy-two hours before arriving, rapid-tested once again at the Kona airport, and two days later in Waimea so that we could inter-island jump to Maui. Five hundred dollars for two local tests (free in the states) was extortion. Airlines and natives seemed far more worried about mask-wearing than transplanted islanders, and the constant prodding tarnished our enjoyment in the end.

Despite Donato’s extensive tournament and media resume voyaging the Hawaiian and South Pacific Islands, there are no guarantees in high seas fishing. Out of the marina, a smaller marlin sideswiped a line and kept moving. Six quiet hours of traversing and trolling the vast plane of blue would follow. However, our luck would change straight out from the Kona coast’s “old airport” on circling back home.

The fight wasn’t as pronounced as I anticipated for a billfish, especially a small marlin. Not a contradiction to my previous opinion on luck, you still have to keep the fish on the line, and we all know there’s a moderate level of technique involved there. Being in shape helps but isn’t completely necessary. Again, the focus is not to lose line tension.

Donato’s equipment included the Shimano Tiagra Reel running a 130-pound line and a 530-pound leader. The #9 Tantrum Fudo X single hook had rotated through both upper and lower jaws, so the trophy was never getting off after hitting the Tantrum Medium Bullet pull lure. In my understanding, this lure’s spread is another critical element to landing good size billfish. VanMols’ anecdotes of testing and redesigning such rigs and hooks explained his historical success since moving to Kona in 1988.

During phone calls in May, both captains agreed that the spring saw decreased harvests in all species categories. Yet Van Mols noted that a typical January to March stretch, historically, can produce an abundance of action for spearfish admirers. The caveat? You have to get to Kona.

Shortbill Spearfish are delicious to eat, and in Hawaii, “Hebi” is considered a surprise “catch of the day.” I haven’t eaten enough to agree its taste is similar to White and Blue Marlin. I disagree it is more pronounced than tuna. If you like Mahi (Dorado, Dolphin Fish), you’ll love the mild and flaky steak of spearfish.

While we harvested fourteen generous portions from the fish, we could only consume four of those before hopping a flight to Maui two days later. We donated the rest to the crew and locals. These days, most resorts will decline to prepare your catch for liability reasons. We found an outdoor grilling area, and with a plate of chopped vegetables, we were ready to gorge ourselves. Seared three minutes per side on a hot grill will lock in the natural oils. While a slab of delicious butter and salt adds a savory touch, in a pinch, we used some Paul Newman’s Italian dressing that has the oil and spices already in it.

Counting down the days can be a grueling tease until our adventures are at hand. I challenge sportsmen of all ages to let nature’s process and timing take care of itself. Who knows, you may land Hemmingway’s trophy marlin or Cummings’ rare “Spear.” And, yes, I just audaciously juxtaposed my name against the likes of Papa, Donato, and Van Mols. After all, that’s how undeserving myths and legends get started.

Quoting Hemmingway from his Pulitzer and Nobel prize-winning literature, The Old Man and the Sea: “Every day is a new day. It is better to be lucky. But I would rather be exact. Then when luck comes, you are ready.” The relentless exacting of navigations and rigging techniques by Chris Donato and Chip Van Mols should put you in that place for achieving your dream.