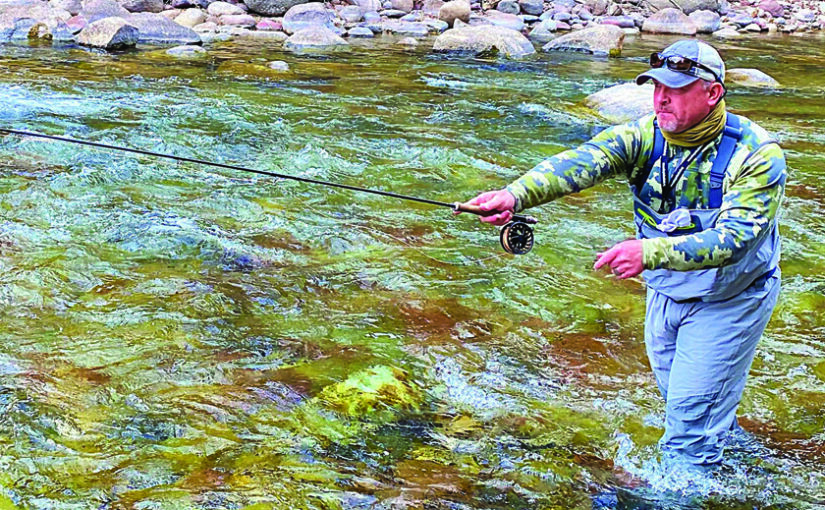 “Nice cast, brother. That’s going to play out nicely,” whispers my guide.  “Wait … wait … wait …” I jerked up and held the line tight. Not many feelings compare to below surface gyrations that vibrate into your hands. “Hooked him,” I professed. A wrestling match ensued that ended in an ear-to-ear grin. Netting my first Colorado trout with childlike avarice is a feeling no boy forgets, at any age.

The mention of an Aspen trout fishing adventure can intimidate even the avid fly fisherman. There are expectations placed on you by your fly circle of friends. Once you commit, your wallets will develop anorexia, and the land and waterways present their own demands and respects. While many anglers choose to study maps and grab the local fly shop tips before wading, others like myself like the comfort of guided companionship when entering new territory. Especially on a float trip.

There are several “Gold Medal Rivers” in and around the Aspen area. To qualify for that status, the water must produce twelve quality trout per acre with a length exceeding fourteen inches. The section must produce sixty pounds of standing stock; those living organisms like plant life, micro invertebrates, and fish. There must also be ample public access. No wonder Glenwood Springs is known as the “#1 Flyfishing Town in America.”

Regardless of the moniker, I had been trying to visit my daughter, working as a ski instructor and waitress in the area, since March of 2019. In 2020, the Covid pandemic exploded in the national news when a group of Aussies came up sick in town over spring break, and “quarantine” became an everyday terminology muttered across America. A week before my liftoff, Aspen shut down, and the fishing, skiing, and tourism industries became devasted overnight. When your twenty-two-year-old calls to say she lost both jobs in a week, you scramble to recover your travel booking deposits. A year later, still, I found my window of opportunity to get there while she decided to come home and escape the insanity of paranoia, mask mandates, and high cost of living.

Peter Golden has been guiding for over twenty years and currently works for Aspen Trout Guides as an independent contractor. Owner Scott Nichols is who I initially contacted before turning me over to the “Doc.” What I appreciated about my initial conversations with these gentlemen was the attention directed to my proposed adventure, experience level, time allotment, and dates. Nothing to hard sell or squeeze me into on the calendar. Just matching me with the right guide and including me in group correspondence, so nothing fell through the cracks.

I have flyfished enough times to get myself in trouble. As an educator, I understand the value of humility, asking questions, and listening, since learning is a life-long endeavor, and the goal should always be to pass it on. I came at Mr. Golden from the premise that I know nothing, so teach me everything I should know in relative, kid-smart increments. He answered appropriately, “More importantly, we’re going to have fun.”

Peter has the patience necessary to be an excellent guide and teacher. If fast tying knots and rigging isn’t quite in your wheelhouse yet, practice that stuff over cigars and bourbon with a friend. Let your guide do it while you ogle the majesty of God’s handiwork and try not to fall out of the float boat.

“I get there’s a plethora of information I’m throwing at you. Everything I say might be voluntary, but my reactions to the water have become involuntary over the years. Don’t worry about mastering anything. Just attempt to mimic my offerings, and with enough repetitions, it’ll sink in. You’ll begin to feel what I’m saying.”

As a lover of the wild and writer looking to pen something of value, I often wonder if my trips produce something worth reading, and this often gets in the way of my staying ‘in the moment.’ What Peter heard me say was, “I need a break from life where no one can interrupt me.”

“Too many folks overthink flyfishing, so I’ll reduce it to this,” assures Golden. “I call what we’re doing science-based hunting for fish, instead of a removed spin casting from the shore. We study a hatch chart, creep into the river, look for rising fish, present a natural-looking fly that corresponds with the hatch for this time of year, and then let it drift. You’ll get lucky. You’ll lose a few bites. And if your mindset is to improve, you’ll take some notes off the day and conditions and compare those with some folks you trust. A few years will blink by, and soon you’ll be mentoring someone else. Don’t be hard on yourself. Just go do it.”

A Colorado River float trip was set for Friday morning, but with winds of twenty-five to thirty miles an hour and gusts reaching fifty, “Plan B” kept us closer to Aspen. We decided to wade on the famous Roaring Fork, one of the last freestone rivers in the state. The headwaters start on Independence Pass at 12,000 feet of elevation and end seventy miles later with its confluence of the Colorado River in Glenwood Springs at 5,800 feet.

You can access the river from the Rio Grande Trail, which runs along the north side of the Fork. And while rainbows and wild brookies are to be gotten upstream, further downstream rainbows, browns, and mountain whitefish will be after your fly. Carving its way through the Maroon Formation, you’ll enjoy the river views of red sandstones, evergreen pines, and firs that line the picturesque canyon.

Peter liked a catch and release stretch just above Upper Woody Creek Bridge. A good guide will offer some ecology lessons along the way, and overturning a few small boulders revealed numerous crustaceans, small case caddis, free-swimming caddis larvae, and even some stonefly nymphs. All the stuff one yawns about in biology class suddenly become palatable, even necessary in our understandings of nature.

It wasn’t long till I realized my nirvana. Using simple roll casting techniques, I dropped lines in over rock structures, catching oxygenated riffles and transitions before letting each drift play out. A traditional straight-line back cast worked fine when overhanging limbs weren’t an issue.

Rainbows seemed to be the dummies of the day and smaller than anticipated, considering the trophy hype. If the sights and sounds of a babbling stream distracted me at all from catching more trout or forgetting my Losartan, I considered nature’s blood pressure medicine an equal trade out.

Exhausting the area by late afternoon, the idea was to hit the Frying Pan River down the road another seventeen miles. And as you’d guess, a customary inquiry with a local buddy changed our plans yet again, scrambling to hit a honey hole before dusk under another suspension bridge around Old Snowmass Road. Slow but steady, rambling currents breaking over and around various protrusions regathered into a nice, deep pool. Despite a creeping wind, success was achieved with a bit of patience and some rigid casting along the foam and cutlines.

This stretch had a two trout limit with a minimum size of sixteen inches. Golden said the average trout were running around twelve inches and a pound in weight. Better specimens ran sixteen to eighteen inches and hit five pounds.

On day two, our adventure started at Two Rivers Park in Glenwood Springs, where a ferocious hatch of baetis mayflies swarmed our eleven o’clock launch, a spectacle for every outfitter with similar intentions that day. Another Gold Medal River, its rapids powered us through the rugged Rocky Mountains, surrounded by the vast White River National Forest. Four hours floated us to the South Canyon Boat Ramp.

We had our highlighted moments for sure. The fights were decent; I landed a half dozen rainbows and several cutbow trout with an equal escape rate. Cutbow is a cutthroat-rainbow trout mix and can be distinguished from ‘bows’ by the slash mark on their gill plate with larger and spaced spots like ‘cuts.’ While we didn’t land one, we did see brown trout there.

Several nice cutbows were hooked in the circling vortex foam at a spot known as Kayak Park. This artificial structure is popular with kayakers and standup paddleboarders, and with every bridge, you stand a chance of heightened trout action.

Despite a sparse caddis hatch that afternoon, the latter half was interrupted by intermittent gales, up to forty miles an hour, that could dishearten the heartiest fisherman. I had to switch it up a little, using more of what Doc calls a “kite cast.” Letting the wind pick up the fly line, I’d then use an improvised roll cast and some force to angle a presentation along the eddy lines, between the current and dead water paralleling the river’s edge.

While the whole river stretch is fly/lure only, portions are catch and release, and others allow a two trout limit with a minimum size of sixteen inches. Smaller to average trout run fourteen to fifteen inches and two pounds. Big boys can get into the twenty to twenty-four-inch range and bulk out at five to seven pounds. Two of my cutbows hit that eighteen to twenty inch and four to five-pound marks.

The Glenwood Hot Springs Resort hosts the world’s largest mineral springs pool. Since 1888, the thermal spring water containing fifteen minerals at 122 degrees has been drawing visitors like the Doc and me worldwide. The nomadic Ute tribe were the earliest known people to take in the healing waters they called “Yampah” or “Big Medicine.” An hour there, followed by a hot pizza, and your night is over.

As for lodging, there are forest service campgrounds and private campgrounds along Hwy 82 and numerous motels, B&B’s, and condos in Basalt, Carbondale, Glenwood Springs, and Aspen. Book ahead for deals as prices fluctuate with vacancy and seasonal activities.

Finally, I think it is fair to encourage a day in Aspen itself. I stayed five minutes outside town at the Inn at Aspen. During late March the elk migrate down the mountains to calve and hang out behind Buttermilk and Snowmass resorts. Aspen has a free public transportation system to get you around and there are plenty of great places to eat. Mi Chola has the best chicken burrito I’ve ever tasted, hands down. The shops are chic, the town is photogenic, and the vibe is chill. While cash is accepted, I suggest a credit card. Or two.