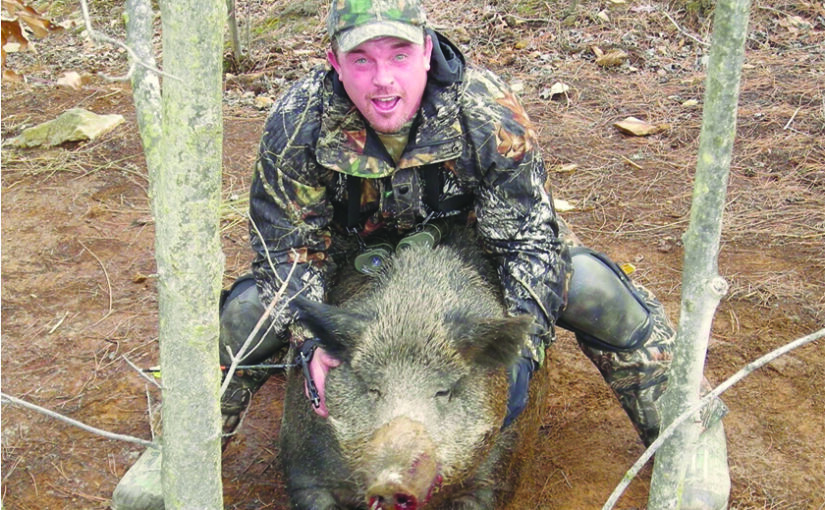 A Most Dangerous Stalk

Relaxed under a large pine, the beast lifted his boulder-like noggin and a stare-down ensued for minutes. Black Bears can scuttle thirty miles per hour and scale trees like lemurs; trying to escape their attack often proves futile. “What have I done,” I muttered to myself.

Creeping tree-to-tree for nearly one-hundred yards brought me to the apex of my hunting career. Twenty yards seemed like five feet when entertaining the top of the food chain and this bruin, understandably on alert, was lucidly unimpressed by my two-hundred-thirty-pound frame. A precarious sign, there lay the real problem. I solicited my guide an obvious inquiry. “This is dangerous, right?” With a soft chuckle, Tony replied, “Very dangerous!”

It was Halloween weekend, October of 2010. I was visiting the Double Boar Ranch in Shippenville, Pennsylvania on a Eurasian Boar hunting mission. Then owner, Russ Ulhrey, had promised several specimens topping three-hundred pounds and one sow scaling much larger. “It’s been hostile out there since she was introduced into that mix of males. She’s been fighting them ever since,” he said. Call it ego, I had no intention of leaving with anything less than the premium hog on the estate and it would take seven hours before I could locate and put it down.

My guides were not unlike most western Pennsylvania brethren — multi-talented in an occupational way and fit into one of two builds: real scrappy or stalky, Tony being the later. None the haberdashers in outfitting themselves, yet often sporting a full and fairly groomed beard, ample body hair, and not a stitch of matching camo. Just clothed in blue jeans and a long flannel shirt, accessorized by a simple florescent orange vest bought at the local sporting goods store. Russ was the scrappy one. Possessing a humble demeanor, despite a brilliant mind and government background, Ulhrey was the victim of a throat condition he literally kept under wraps.

As documented in our photos and videos, we estimated this male bear, also called a boar, placed well between five and six hundred pounds. Many hunters leave us their ‘tall tales’ uncorroborated, so I had Tony briefly relieve himself of guard duty and snap evidence of me bowed-up on this bruiser for my buddies. Shaking, I whispered emphatically, “I’m capable of ‘smoking’ this record book – right now,” before drawing down. Equally impressed and with rifle ready Tony exclaimed, “Scott, in thirty years of hunting Pennsylvania I’ve never seen a bear this big. This is truly a once-in-a-lifetime experience.”

Please make note that I’d never shoot an animal outside of season, except in self-defense, and I was clearly in the wrong for approaching this creature unprovoked. The alpha male stood to his feet and gave me that look any father would when sacred sleep patterns have been upset. He ambled a few strides away, and as I further encroached, he stopped, looked back as if to say, “Knock it off,” then lumbered off as I stood speechless in a heart-pumping sweat.

If it weren’t so dangerous, I’d wish this moment on every man … it was surreal yet palpable, exhilarating that feeling … and I’m still so thankful for it.

Three weeks out was the official opening of bear season in my home state and this bruin had climbed a tree with his buddies near the south ranch fence and dropped themselves into a carnivore’s dream, waiting to scavenge on the carrion of hogs. What started as curiosity over the sweet taste and aroma of corn feed, soon developed into a thirst for blood. Now free-ranging whitetails hopping the short fence were being pursued. Despite the losses incurred, Pennsylvania DNR informed Russ Ulhrey that bears were protected outside of season and inside his fence. Worried that they wouldn’t leave, Ulhrey’s mandate was raspy but sacrosanct, “No gutting of trophies will take place within the fence line.”

As for the boar hunting, well, I had my share of stalks and opportunities. Nothing seemed of interest up close. I did take a shot at a very stout specimen, but the unforeseen branch that deflected my victory proved to be a real blessing later.

Just an hour after our first encounter, a second bear estimated at three-hundred pounds was spotted on the west side of the property as we headed in for lunch. It too was lounging under a tree and I moved within ten yards of it before spooking. At this point, my adrenaline had left me deceived, and with guard-down, another dangerous scenario; I advise no one to approach a bruin, of any specie, at close range.

Back at the lodge, our exchange at the dining table turned titillating and reminiscent. A comparison and contrast to John Henry Patterson’s Lions of Tsavo lore. An anecdotal aura surrounded the room as we surmised what both trophy species had in store for us in the hours ahead. Would it be claw or fang that might beset us?

After a hearty meal, we ventured back into the hardwoods and soon found ourselves stalked by both predatory bears working in tandem. Intoxicating were the wafts of acorns and evergreen pitch as I glassed for tuskers and how short proved my memory. It was then that Tony whispered, “Don’t make a sudden move. Look slowly to your right.” There stood the alpha male at fifteen yards and fixated on our steps ahead. He hungered like your dog awaiting table scraps. Raw profanity, incited by fear, was never spoken; yet I heard it in my mind.

It is then that the game turned sour in my mind. It was one thing to assert my ignorance in pursuing that bear. It was another to be the prey of this dominant predator.

We backed away slowly and were cognizant to keep a twenty-five to forty-yard buffer between us over the next few hours. Finally, we caught sight of five equally curious and enormous Eurasian Boar, officially nomenclatured ‘sus scrofa’, approaching us with caution from some brush to our left. As I carefully drew my bow, our intrusion of habitat set off a thirty-minute chase darting in and out of high thicket and weed cover.

Hogs are a formidable opponent; hundreds of pounds compacted into a short frame, one can have their legs or back crushed on impact, if not gaped with the brush of a curled tusk. Imagine the trepidation of standing in tall grass reaching your chest, guttural oinks and grunts echoing between densely timbered giants, the ground shaking underfoot when a sounder of swine sprints within yards of your being.

Should they run it could be an hour before we catch them across the hollows and hills of the ranch. If they charge, how will I defend while opening myself up to make the shot? I will have but a second or two to decide. Every time we traversed within shot range, they realized our invasion tactics and tempers flared. The hairs on my head were erected like the bristled hackles on their neck and back. On top this vicious energy sets the absolute truth that I’m being pursued by two ravenous bears and my head was on a swivel. The rush was supernatural.

The clock on my travel itinerary was ticking as a two-hour drive tonight, after several hours of prep work and quartering, awaited me. Tomorrow meant further butchering at my mother’s house in Johnstown and eight-hour transport home to Indiana. My brightest moments to shine are realized in tests like this. For my guide, however, it was a matter of fitness at this point. Wearing the swine down at a watering hole, Tony handed me his Remington 700 30.06 and said, “Let’s get this over with.”

Indeed, I aspired for the archer’s trophy, but soon the sun would be setting. As we stole cover behind the clustered fluff of some white pine needles, two hogs stood sentry as three others drank in a line. This selection wasn’t about the length of “cutters and whetters” rather sheer size and a salt and pepper bristle preference, despite its transition to a winter coat. I beaded up on the last hog’s shoulder with just a second to spare before they spooked again.

As the shot rang out, I watched the quarter-ton monster drop in her tracks at thirty-five paces, spinning and screaming like a demon. The bears seemed to had disappeared. “What now Tony?” “You came with a bow,” he figured. “Go finish her off, but circle around slowly. If she gets up, you’re going down!” I snuck downside her and thrust an arrow deep into the chest cavity, maybe ten inches behind the armpit. Then there was silence.

Upon examination, it was clear the sow had her share of tomboy play. Both top and bottom tushes were broken off. In addition to the deep and festered face, neck, and shoulder gashes, her left ear was ripped in half; all battle wounds inflicted by biting boars trying to set the pecking order back into a paradigm. Her head and hide alone were later weighed in at ninety pounds, but at that moment I summoned the strength to raise it for the camera. My pinkened face verified the strain.

To get an idea of how dense this pig and her ‘side plate’ were, internally she was destroyed between the shoulders without an exit wound. In fact, I had a difficult time finding the ballistic’s point of entry as her thick leathery skin had sealed over and no trace of blood. With exerted effort, I removed my arrow from underneath the animal and jammed it into the bullet hole to mark that spot for later inspection.

As I sat exhausted, relishing my freshly expired trophy, Tony again cautioned me to turn around. There stood both bears at twenty yards and now circling us for rations. We began yelling and throwing rocks while frantically radioing for backup at the lodge. That was the longest ten minutes of my life.

It took four of us to load the ‘beast of kings’ onto an army MASH gurney and into the Kubota ATV; we had to get out quickly. No sooner we drove through the nearest fence gate and locked it down, the alpha bear advanced to the kill site and began slurping up the blood pool left in a mud slurry. Witnessing such behavior was a gruesome reminder of nature’s indifference towards fate.

Attempts to weigh the sow in the maintenance building proved vain as the hoist chain snapped twice, once missing my face by inches and hurling the heavy, burly hook across the shop before embedding into the wall overhead. Soon after, a butcher down the road would exhibit three inches of fatty gristle encasing the marbled and heavily-meated torso. It was there she’d tip the scale at four-hundred and seventy-one pounds in total.

Pound for pound, if pork is your goal, it is better to pursue small to medium-bodied hogs.

To this point in my life, I’ve experienced the luxury and luck of pursuing a fair amount of North American big game in a relatively short time frame. Bowing the white deer, wrestling alligators to submission, and dragging shark onto a boat’s stern at sea are at the top of the list. And yet, this story may just be the apex in and of itself.

My taxidermist ordered the second-largest swine mannequin made. Guided by measurements and photos, he added so much plasterwork to fill out the hide that the end piece became quite the hoist for display. While guests ogle the massive mount with much awe, it pales when I relive a most dangerous stalk that autumn day.