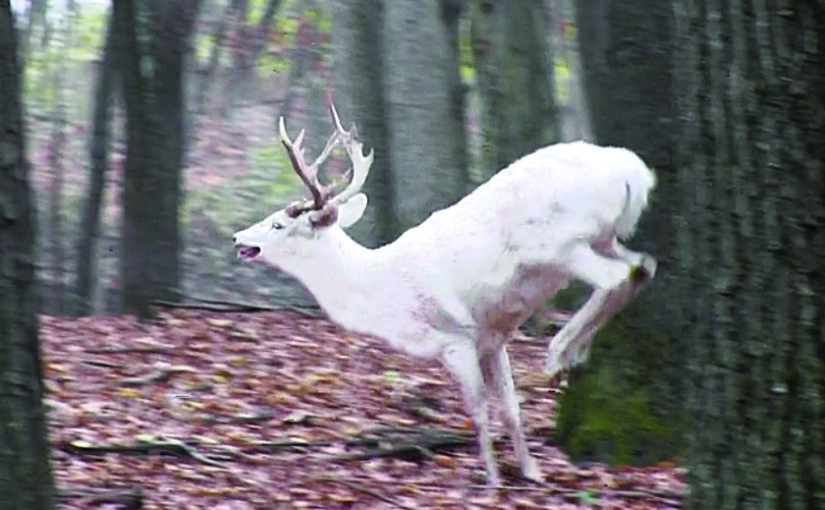 The Ghost of the Forest

In one’s lifetime, it is possible to come into contact with a few animals or experiences that profoundly change the way you think about wildlife and conservation. Being stalked for hours by a large black bear in Pennsylvania was one of those moments. Trapping live alligators in Florida was another. Photographing Alaskan brown bears at close range; pursuing New Mexico mule deer into steep desert crags; hoisting a thrashing shark aboard our boat in the Outer Banks — all exhilarating. However, no experiences to date have created such a deep stir in me that I sense a reverence each time I look at the photographs I once snapped of a pure white deer on a hunting preserve (location undisclosed).

A few years back, I was given the chance to research and document such a species on six hundred acres in the mountains. As an outdoorsman and educator, this was a multi-day gift placed in my lap. Traversing the property’s hills, I couldn’t help but feel this slight sense of uneasiness in knowing someone could have taken this specimen. Why would they harvest him, and was it necessary? If the hunter consumed his flesh, should coat color matter? If hard-earned money had fallen into the conservation kitty, ensuring more exotics bred into the future, should anyone lose sleep?

Like my photographing and filming, I think bowhunting that magical white deer would’ve waxed more surreal, a medieval fairy tale that played out like something read from a C.S. Lewis novel. Carrying the pigmentation disorder of leucism made that ungulate an autumn target for predators and liability for his herd, yet this ‘ghost of the forest’ vaporized into the early morning fog and wintery landscapes.

To be clear, I am not the mouthpiece for ranch hunting. Once inconceivable, I viewed it as a sin. Accepting the opportunity on an invite, my eyes were opened to the behind-the-scenes efforts in running such a business. The investments in land, fencing, structures, genetic breeding stock, feed, labor, and risks are enough to run off most “want to be” talkers from this daunting profession. Done right, I can now see how this sporting option is a legitimate extension of our freedoms. To stone-throwers, remember this: if you have ever participated in an upland bird put-and-take hunt, drop the rock.

We learn a lot about ourselves when we enter the outdoors. But only time and personal experiences can mold us into who we are today. We cannot philosophize on what we haven’t encountered, as that is theory and pure conjecture. No one knows how they’ll react in a new situation. As with any of life’s endeavors, I encourage fellow sportsmen to listen twice as much as they speak, and how they speak about one another.

Taber’s medical dictionary shows the etymology of leucism deriving its meaning from the Latin variant leuk-, taken from the Greek leukos, or white. Leucism is a rare genetic pattern (a recessive gene) that causes a reduction in the pigment of an animal’s hair and skin. Mutation can happen when excessive inbreeding occurs.

The natural colors of the broader deer family range from dark red, to brown, and even grey. White deer are thought to be albinos; however, unlike albinos, with characteristic red eyes and clear hooves, deer with leucism have normal brown coloring in their eyes. Occasionally blue and green hues are seen. Leucism, then, is distinguished biologically from albinism in that it triggers reduced pigmentation in all skin types, not just melanin.

More common than a complete absence of pigment cells is localized or incomplete hypopigmentation, resulting in irregular patches of white on animals that otherwise have normal coloring and patterning. This partial leucism is known as a “pied” or “piebald” effect; the ratio of white-to-normal colored skin can vary considerably between generations, offspring from the same parents, and even between members of the same litter. This is also notable in horses, cows, cats, dogs, certain pythons, and several other species.

Birth rates for pure albino deer are estimated by wildlife biologists to be somewhere between one in 10,000 and one in 100,000. Quite a range, due to the impossible tasks of locating and reporting. Coupled with poor eyesight and physical abnormalities like short legs, curved spines, and malformed internal organs, it’s no wonder few reach maturity.

In contrast, darker-eyed white deer (not so much in elk, moose, and mule deer, due to their vast ranging capabilities) are becoming the more common sighting. They are a hardier breed with heightened senses like normal whitetails. Possessing less abnormalities – maybe palmated antlers with missing or malformed brow tines, their coats pose the real survival compromise. Some writers at a distance offer broad sweeping characteristics that aren’t fact, claiming white deer have only brown eyes (mostly correct), brown noses and clear hoofs (incorrect), and the same physical abnormalities as albinos (mostly incorrect).

The Symbolism of the Ghost

White deer occurrences in the animal realm carry messages of spirituality, higher thoughts and ideals, purity, and cleansing of the soul. And while female deer are generally associated with benevolence and renewal, males add to this litany virility, longevity, and abundance.

Native Americans believed the occurrence of a white animal was a sign of prophecy, a sign from the Great Spirit that a significant shift in their world was forthcoming. Therefore, the albino was protected by most Indian customs and not to be hunted without a curse. If an albino deer was harvested, devoid of remorse, the hunter might later lose his life in an accident involving his hunting or survival skills. Following the customs of these legends over the last century, hunting and trapping restrictions were not enacted so much out of fear for the taboo, but more so out of respect for the higher considerations of nature and the Creator.

In Europe, this tradition plays out through the species of fallow and red deer sharing the leucistic trait. The Celtic people considered them messengers from the otherworld, appearing to avenge the transgressing of taboos or signaling for knights to take on new kingdoms and quests.

It’s hard to believe that Jägermeister has a link to Christianity. Known for their 70 proof digestif liquor, its name translates to “master of hunters,” attributed to the high positions of senior foresters and gamekeepers in Germany.  In 1935, owner Curt Mast dedicated his new recipe — as a toast — to all hunters and their honorable traditions. As for his logo? Only a legendary stag’s head would suffice, one with a beaming cross between its antlers. The white deer appeared to a pagan hunter and converted him to Christianity. The same hunter who later would become the patron saint of all hunters: Saint Hubertus.

The rare genetic coloring of the white deer affords them no chance of long-term survival in the wild. However, many states have acted to protect both white deer and albinos as a vestige of beauty in modern society. Illinois, Iowa, portions of Montana, Tennessee, and Wisconsin are examples. Because of their elusive nature, hunting them (outside of Chronic Wasting Disease Zones) is often greeted with community anger, stiff fines, and even jail time. Oddly enough, piebald deer are legal to hunt in most states and the question soon befits, how much is too much white?

In addition to ecological, educational, historical, recreational, and scientific value, the 1973 Endangered Species Act also lists aesthetics (or the appreciation of beauty) as another reason for protecting certain animals. I’m not sure we need protection mechanisms put in place on public lands. And what about private ranching efforts? If high fences are not illegal in your state, who should decide whether a deer’s color makes one hunt ethical and another immoral? Like exotic hunting in general, it’s not just hunter versus anti-hunter; even the sporting brotherhood can’t agree on this matter.

In 1941, the U.S. Army installed a fence around the Seneca Munitions Depot in Canandaigua, New York. It was assumed that whitetail deer were caught in its confines, and the herd quickly grew to include white deer sitings. In 1949, the army granted protection for the leucistic breed, under the direction of Colonel Franklin Kemble Jr. Despite reduction hunting to control the overall whitetail population today, now numbering eight-hundred strong, nearly three-hundred white deer are still protected. Seven thousand acres of the military base are now privately owned and open for tourism with conservation fundraising efforts the goal. While small pockets of these deer have been found worldwide, the largest herd still resides in Seneca County, New York.

Let me be frank. Albinos, piebalds, and white deer are anomalies, meaning they deviate from the standard or norm of whitetail development. But with respect I must make it clear, they are not an endangered species. Only their coloring makes them an inevitable sacrifice in the wild or they’d be a more common sighting. Remember, the Seneca Army Depot has to thin their white deer herd, so their inbreeding doesn’t spread throughout the whole whitetail population there. So outside superstition and our Disney mentality towards nature, this isn’t the big deal some in the public make it.

I called a good friend in the deer ranching industry to get insight into whether game preserves possess or raise these ungulate aberrations with any real intention. He said it’s pretty uncommon because the genetic stock is rare, and even though the novelty of bagging a pale trophy seems paramount, it’s still about rack size for many hunters. Piebald buck racks seem to develop as normal whitetails, but white deer and albinos tend to have flattened antlers which cramp genetic superiority. However, Andy felt that one could selectively breed white deer with relative ease but that it’d take five years to raise some 140-class bucks and closer to ten years to hit 180 or 200-class trophies.

That’s a rancher’s preference. I think most operations want to avoid the inevitable public outcry from animal activists.

In our weapon’s site, in our research, and in our reads of antiquity, the white deer holds a special place in both time and culture. Of course, conservation measures enacted in Canandaigua, New York, will look different from those on conservation game ranches or public lands. Still, as long as we’re building herds and preserving some specimens for future enjoyment and study, I say we can honor both objectives. My wish is that everyone can witness the ‘ghost of the forest’ if but once in their life. It will be a jaw-dropping, inspiring experience you will never forget.