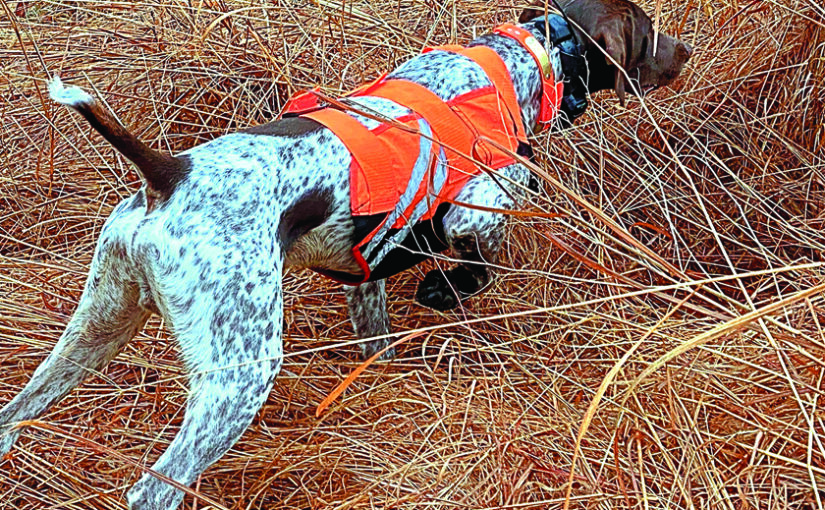 Owning a gundog sounds like an achievable dream when ogling upland magazines; their colorful ads and layouts portray regal companions stiff on point or trotting back a gorgeous ringneck. Peruse the articles. There’s work involved.

Part One of this series recorded the first six months of my gundog’s care and nurturing. In Part Two, I described my regimens and challenges regarding Stohon’s nutrition, training, and hunt introductions in the second half of year one. Part Three reflected reinforcement maintenance in training as Stohon transitioned into an adult German Shorthaired Pointer and full-on hunter.

Today, in Part Four, I’d like to discuss my dog’s breed as it relates to my goals and how his second year summed out. The American Kennel Club (AKC, 1975) defined their gait: “Smooth, frictionless, with powerful hindquarters’ drive. The head should be carried high, the nostrils wide, the tail moving side to side rhythmically with the pace, giving the impression of a well-balanced, strongly-built hunting dog capable of top speed combined with great stamina.” Agreed.

This article will bristle some spaniel and labrador owners, and any other breed folks think is better in the field. I’m just presenting one option and corresponding information to help potential owners make an educated choice. Let me say I’ve hunted for years with almost all the sporting breeds.  Any dog that can find and retrieve downed birds is a hunting dog, period.

Shorthairs are a handsome and hardy breed, lean and sinewy, often sporting liver-colored patches and a ‘ticked’ coat. I’ve always admired this look, and while I don’t care what others think about my dog, who doesn’t like a compliment.

Pointers are an intelligent, psychological breed, believing they belong as an equal member of your family. They are great with kids and gentle with little ones. When my daughter says, “belly rub,” Stohon lays on his back in anticipation. When the wife and I point and command, “tub,” he jumps in the shower and enjoys being cleaned. Possessing a jealous gene, he even separates us during affectionate moments.

It makes sense that these pups will bond and behave better as house dogs. At least for the first year. If multiple dogs are your desire, then due to combined energy, most folks kennel them outside, and they’ll thrive with companionship.

Pointers have an insatiable appetite to work, play, and please. GSPs need to sprint twice a day, or their anxiety builds. Chewing a table leg is a pup thing that should subside before year one. However, trashing a new toy or raking the carpets had rarely occurred when our schedules skipped a run.

Gastric Dilatation and Volvulus, also known as bloat, usually occur in dogs with deep, narrow chests. This means your GSP is more at risk than other breeds. When a dog bloats, the stomach twists on itself and fills with gas—the twisting cuts off blood supply to the stomach and sometimes the spleen. Left untreated, the disease is quickly fatal, sometimes in as little as 30 minutes. Surgery can fix this dilemma.

Cataracts are a common cause of blindness in older GSPs. Watch for the eyes’ lenses to become more opaque—meaning they look cloudy instead of clear. Surgical removal is an option to restore sight.

Don’t be fooled when you’ve read GSPs don’t shed. Twice a week, a “cactus massacre,” as I call it, occurs throughout our house. Those little straight hairs suction to everything. A pup’s first coat transition will bring on overwhelming shedding. Later on, allergies can play a role, and it’s often a food concern. Coat brushing twice a week will relieve this issue.

German breeders in the mid-19th century deliberately set their sights on creating a gun dog so versatile that it would hunt all species of upland game birds, waterfowl, and small game. If that weren’t enough, their relentless efforts would soon extrapolate a superior canine line that could scent track big game such as wild boar and wounded red deer on top predators like the fox if necessary.

Genetic sourcing for this marvel mongrel included pointing lines from Spain, France, and Italy in the 1700s. The first efforts at creating such a breed produced mediocre specimens with oversized bodies and short legs. However, with multiple infusions from more foreign gun dogs, particularly the English pointer and English setter, the German shorthair genetics were well established by the late 1930s, becoming the exceptional dog today in both form and function.

When this pointer arrived in North America, hunters were less interested in blood tracking big game. Instead, they coveted dogs that could find, point, and retrieve pheasants, quail, and grouse while fetching up any ducks or geese that fell on land or water.

The commonly held belief is that most German shorthaired pointers, unlike some other breeds of gun dog, can ‘hunt right out of the box.’ By that, I mean that the average bird hunter can take a pup under a year old and, with a minimal amount of training and good exposure to gamebirds, produce a proficient and prolific gun dog. This is due to that genetic base where innate hunting tendencies were derived through selective breeding and not always evidenced early on with other dog breeds.

What do ‘field trial’ bloodlines have to do with raising a traditional upland dog? For starters, the tendencies are there should I want to train Stohon for competition purposes. More importantly, those attributes of greater speed, stamina, agility, and poise, constitute a wider range of athleticism that should make him a better hunting dog.

Expect males to reach a height of 25 to 28 inches and 55 to 75 pounds. Bitches average 23 to 26 inches in height and weigh 44 to 65 pounds. If you see a monster GSP, ripped and not fat, you can bet it possesses purer German bloodlines.

Buying a gun dog is always a gamble to some measure, but knowing the lineage of higher-pedigree litters can usually deliver the confidence that you’re getting more dog for the money. If you haven’t done that homework?  Then love the one you’re with.

As I discussed in Part 3, the one exception was letting Stohon loose to bum-rush roosters in South Dakota. With three companions and 5-8 men pushing a parcel, there wasn’t another option. Confusing to a classicly trained pointer, it was with my permission, and it was equally my job to reign him back in for an Illinois hunt two weeks later. I owed that dog grace and patience, and he conformed after an hour of reminders.

Here are some simple points to keep in mind (for any adult hunting breed) when ramping back up for the fall season:

Keep training sessions short and sweet. When dogs lose their attention in that summer heat, it is time to quit. On that note, keep to early morning and late evening hunts in the coolest parts of the day. As the weather warms up, scenting conditions can deteriorate, making their already difficult task of finding birds a frantic, frustrating mess.

Bring lots of water and take breaks. Something so simple, yet humans forget their mutts regulate body temps and cool down through their mouths. Hydration is crucial to release toxins, feed joints, muscles, brain tissue, and reset focus.

As for feeding, stick to your breed’s intake recommendations. Purina Pro Plan Sport Performance incorporates amino acids, 30% protein and 20% fat fuel to maintain drive and lean muscle, glucosamine and omega-3 fatty acids for joints, probiotics for the stomach, and real meats for great flavor. If your dog’s breed is susceptible to bloat (gastric torsion), avoid feeding your pet several hours before or after exercise. While most gun dog owners know this, family and friends often like to sneak a junk snack out of pity. That dog won’t die waiting to be fed, but it might if his stomach twists over. Don’t do it.

Even veteran gun dogs need time to get those footpads roughed and toughened for the heavy mileage of bird season. Take it easy on a pup and check their paws frequently for cracks, cuts, web tears, and thorn punctures. Exposure to hot sidewalks, pavement, sand burn, or lawn fertilizers can irritate their feet. Musher’s Secret is an organic wax that conditions paws while still allowing them to breathe. It is edible if dogs lick it, and you’ll want to rub it in at night when they are kenneled as it is rather greasy.

Tick season and allergies are par for the adult course. Reactions to the plethora of chemicals in mulch, fertilizers, and water runoff on walks can have a dog scabbed up in no time. Our vet prescribes bacterial medicine for Stohon, and he clears up in a few days. But the bill isn’t cheap. Hunting breeds like pointers, Weimaraners, and Brittanys are more susceptible to eating the infected feces of geese, the source of the Eimeria (false) parasite, or even Campylobacter. Ticks and heartworms are always on the watch list, so keep their shots current.

Spayed and neutered dogs are less likely to contract certain cancers, be disturbed by environment changes, become aggressive, hump things, and water every other bush in the neighborhood. Weight gain will be a consideration with hormone shifts, so be careful to keep caloric intake regulated. Spayed and neutered dogs are often easier to train because their personalities are stabilized, and chances of distraction are decreased. It is vitally important to fix a dog after it has physically matured, which means that the dog should already have had most of its training before this procedure. Rule of thumb, females are fully developed by age one and males by age two.

I hope this series was informative for the prospective new dog owners out there. Special thanks go to Lion Country Supply, Nestle Purina Pet Care, and Cedar Creek Veterinary Clinic for their support. Remember, GSPs are high-energy and deserve attention. Making a great family member and even better hunter, the benefits outweigh the efforts. Good luck.