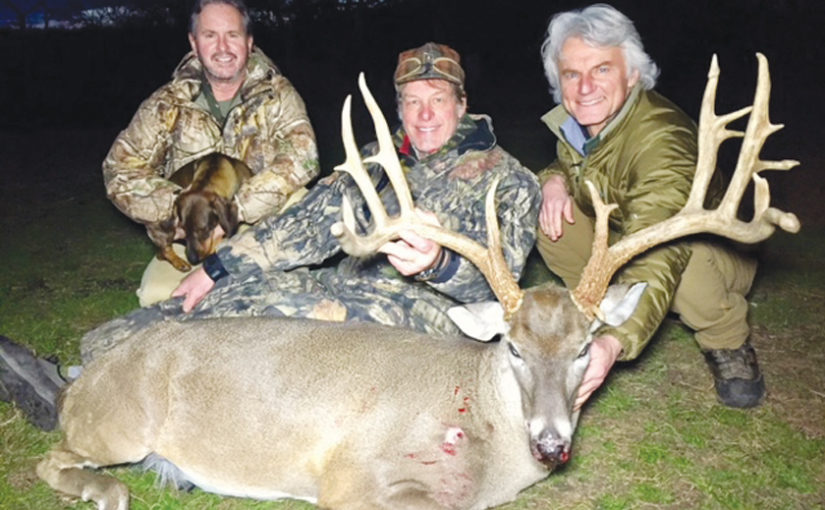 I thought for sure I would tumble out of my stand the way my body was trembling and quivering so violently. Without a doubt the biggest buck of my life was standing statuesque not 15 yards in front of me on full alert, head up, cocked, locked and ready to rock!

His big, radar ears were erect, moist nose in the air, eyeballs bulging in a full-on gonzo attempt to find the source of the overbearing electronic predator Tedator death-rays zapping the South Texas puckerbrush all around.

I’ve been here so many times before, and under these trying conditions, it more often than not does not end well for this old stinky Rock-N-Roll bowhunter.

SpiritWild VidCamDude Kris Helms and I knew this predator-prey game all too well, and we reciprocated in kind with a deadly stealth response of our own, determined to get an arrow into this giant beast’s pumpstation come hell or high water!

It’s not like I was caught off-guard, for I live to never be off-guard, especially when bowhunting South Texas on the amazing 777 Ranch outside Hondo, Texas with legendary professional hunter Jeff Rann.

Talking about “target rich”! I was sitting in what may very well be the trophy whitetail deer mecca of planet earth, so we knew darn well what we were getting into.

But this test of nerves went on forever. I know; we always believe our deer stare-downs go on forever, but this time, it really did, and I was determined to win this standoff no matter what.

This giant old buck had enough head-bone to push the mystical 190” mark, and I called on all my lifelong killer instincts and hard learned bowhunting lessons to get the job done.

I reminded myself over and over again to breathe. After 10 minutes, I continued to force myself to ignore the mass of antler and drill my focus right into the crease behind his foreleg.

Finally, when his head pivoted ever so slightly away, I began my lifelong Zen muscle-spirit memory archery draw and shot sequence with all the determination I have ever mustered.

Then the bow jerked, and my zebra arrow flailed meaninglessly to the ground, landing sideways under the buck.

I’ve never done drugs in my life, but right there and then it became crystal clear to me why some people may indulge.

I knew immediately what had happened in spite of the dizzying hysteria surrounding this mind-boggling, spirit-shattering bowhunting blunder moment.

After sitting in the chair of my quadpod for long hours that morning, I had eventually slouched back, slumping to be comfortable. When the buck first appeared so close, I hadn’t dared to lift myself up into shooting form, certain the wary beast would detect even the slightest of movement.

Throughout the long wait for a hopeful shot, I remained in a slouched position, and when I finally made the decision to shoot, I made the terminal mistake of attempting to draw back my bow in what can best be described as an anti-archery form, slumped body condition.

Using a back-tension/thumb release, I somehow triggered it at half-draw and the arrow spilled harmlessly to the ground.

It’s not like I am not aware of how critical archery form is for proper arrow control, but after that long, nerve-wracking wait, I foolishly began my draw in a slouchy, hunched over condition, and the buck laughed all the way into the Texas neverlands!

I took the expert advice of master archer/bowhunter Randy Ulmer many years ago and rotate my use of various mechanical release aids to maintain maximum awareness of shot sequence to help manage my lifetime of on again off again dreaded target panic.

Had I used my wrist-strap trigger-finger release where my finger would not have been near the trigger, I would bet you anything that buck would have died that morning. But with my right hand and thumb wrapped tensely around the trigger mechanism on my back-tension/thumb release, my slouchy body allowed my hand to compress and touch it off at the most inappropriate moment.

I have made many painful and oftentimes heartbreaking mistakes and miscalculations in my hunting life, but the most important thing to remember about mistakes is to learn from them and do everything in our power to make sure we do not repeat them.

With many months ahead of us before deer season opens, now is the time to look back on those mistakes and review the gory details in order to pound them into our memory bank, and practice ways to remind us how to never make them again.

A few days later I was able to implement my lesson learned and arrowed a dandy 777 Ranch whitetail monarch from the very same stand.

The ultimate reminder of that earlier tormenting morning is the photo of my hunting buddy J. Alain Smith holding that monster buck that I missed that he killed two days later. I am very happy for him, but I could have been even happier!