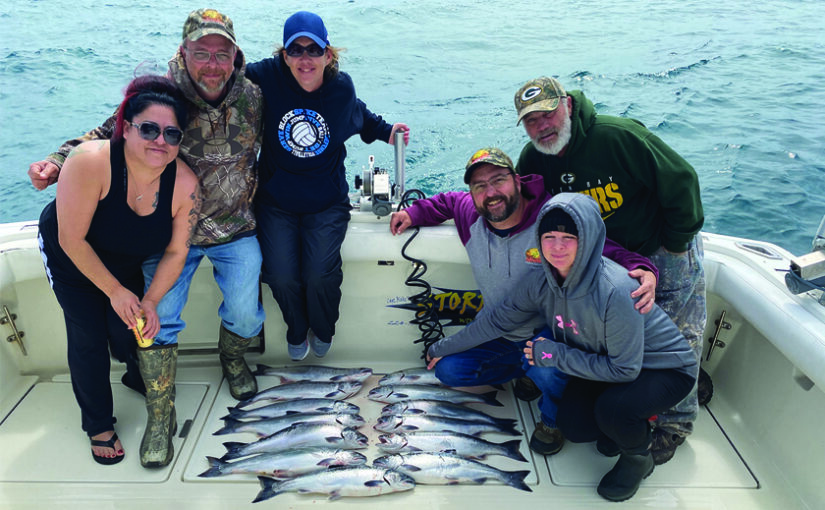 Another great month in the books and now we are halfway through 2022. In past years our family has spent Memorial Day weekend camping at a strip mine in Farmington, Illinois. Last year we were unable to attend due to a softball tournament for my daughter. This year I was planning to go but the magazines for June had arrived, and I wanted to get them out for Memorial Day weekend.

Of course, my friends started sending me pics on Friday and kept rubbing it in that they were catching big crappie and I am delivering magazines. After completing my route on Saturday morning, I got caught up on house and yard work when my buddy Al called. Everyone was leaving on Sunday, and he didn’t have anyone to go fishing with on Monday. I looked at my wife and asked if she wanted to go fishing which I knew her reply would be yes.

So, we set off early Monday morning to see if we could get a nice mess of fish to eat and hopefully start putting some in the freezer. Usually, I have plenty of fish, but this year we ran out in April. I always try to keep some crappie fillets back for when I get some mushrooms, but this year, we didn’t have either. As we arrived in Farmington, it was a beautiful day. We hit the lake around 6am and headed to the back of the lake where they had been catching some fish. The group had been using minnows most of the weekend, so I wanted to try and use some of my new TopHat Jigs to see if I could pull some nice crappie over the rail.

It didn’t take long before I figured out the speed and retrieve they wanted, and I started catching some really nice crappie. The first one to come in the boat was just over 12”. It was a great way to start off the day. As we continued to catch fish, it seemed every crappie we put in the boat was between 12” and 13”. It’s not every day you get to catch that quality of fish.

After the first couple of hours, the bite seemed to slow a bit, so we took a break and grabbed some breakfast. After an hour or so break, we decided to head out for a couple of more hours before it was time to pack up and head for home.

When we headed back out the next day, we went to a new location and almost immediately started catching fish. As I threw my Teddy Bug from Tophat Jigs, I felt a thump. When I set the hook, I knew right away this was a nice fish. I figured I had hooked into a bass or something other than a crappie. I fought the fish around plants, trying to get it up to the surface without getting it tangled in the trees. I could see several branches from a tree that the line was rubbing against and worried that if I didn’t get this thing up and away from this limb, I would never know what kind of fish it was. I fought this fish for a while not knowing what was on the other end. As I finally got it away from the tree, I saw the flash. It was a crappie and a good size one. I yelled to Al and Leah to get the net. I wasn’t going to boat flip this beast in and take the chance of breaking the line or pulling the hook. Leah grabbed the net and boom; the fish was in the boat. The fish was just short of 14” but it was a very healthy fish and it weighed in at 1 lb. 8 oz. It was the second time in the month of May that I had caught my personal best crappie.

We ended up with 39 fish but the best thing about it was we had a gallon and half of fillets, so we could start refilling the freezer.

Now that we have a few fish for the freezer it was time for our annual trip to Lake Michigan. For several years I have gone with my good friend Dale Florek with Noble Charter Service. Dale finally retired, so we decided to go with Dale’s old first mate Blake Keulen on his new boat, Storm Force Sportfishing. Blake is a great kid who has been around charter boats most of his life. His dad owns a couple of boats out of North Point Marina and now Blake has his captains license and his own boat. He was a captain for a couple of years on another boat but now he has his own boat and first mate.

We arrived in Gurnee, IL to spend the night and as usual we headed to Giordano’s for some deep-dish pizza. After supper we headed back to the hotel to relax and get ready for the next morning.

As we sat outside the hotel talking it started to rain, and unfortunately the last couple of years we have had to deal with rain, and it seems to slow the bite down, so I wasn’t sure what to expect when we hit the water.

We woke up at 4:00am and headed for North Point Marina. We arrived and was greeted by Captain Blake and First Mate Hunter. Everyone was excited and we set sail for the fishing grounds. Once we arrived and got set up, we had a bite almost instantly. Unfortunately, we didn’t get that fish in. The first couple of hours were a little slow. The water had been cooled off by the rain and the fish were biting, but they just were not being aggressive. As time went on, we caught a couple of fish here and there and then all of the sudden we had three fish on at one time. Luckily, we were able to get all three fish in the boat.

We fished for six hours and ended up with a total of 13. We have had years where we have gotten our limit of 30, but most of the time, we end up with around 20 or so to bring home.

What was nice about this year is the coho salmon were 3-4lbs a piece. In the past I would say the average coho was around 2lbs. They were nice and healthy fish. At the end of the day, we ended up missing nine bites. So, if we would have gotten all of the bites, we would have had one big mess of salmon.

After I trip was over, I continued to check out Storm Force Sportfishing on Facebook and after we left, he had an afternoon crew come in and they absolutely crushed it in the afternoon when it warmed up. Then for the next several days he was catching limits with some of his other clients so now would be a good time to book a trip to Lake Michigan.

I would recommend Captain Blake Kuelen and Storm Force Sportfishing to anyone. If you are looking for a trip on Lake Michigan and want to catch some coho or king salmon, you should give Blake a call at 224-730-4105 you won’t be disappointed.