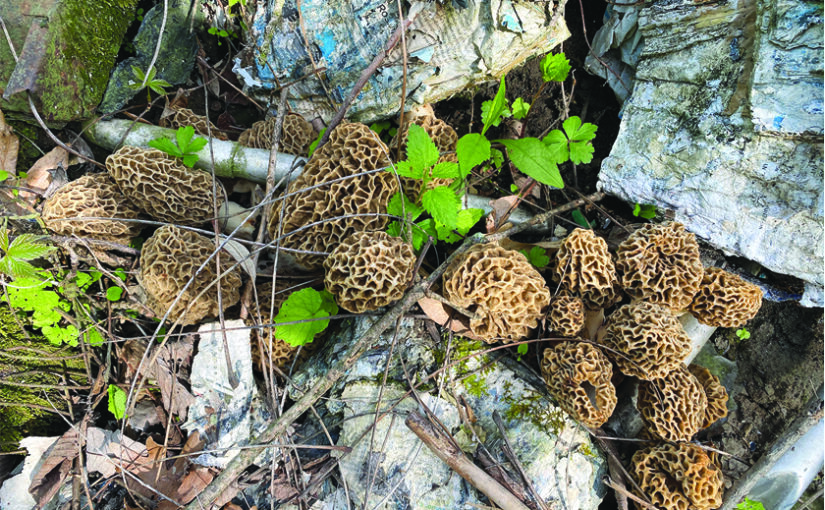 What a great month of adventure. Of course, as soon as the last magazine was put to bed, I started planning my mushroom hunts. Many people say Mother’s Day weekend is always the best but in my book the last two weeks of April is when the magic happens.

My first plan was to try a new area on the outskirts of Washington. Unfortunately, that did not pan out so well. I walked for an hour or so and found nothing so I decided it was time to go where I know there will be mushrooms. I set sail for another property and hopefully a better return. It did not take me long before I spotted my first morel. I spent four hours walking the hills and hollers trying to find the elusive morel. After finishing the day thinking, I need to get in better shape I ended up with 29 mushrooms. Not bad for the first time out. It seems I usually find around 20 the first time out and the numbers go up from there.

The next day I was going to head to my grandparent’s old farm in Cuba. My aunt and uncle own the land next to it so I always try to make this trip once a year just to see the old farm and reminisce about my summer days spend bailing hay and straw. Back then, it seemed like a crazy way to make a few bucks but the work ethic a farm instilled in me thrives today. My grandma, for many years talked about this gully that split my grandparents and aunt and uncles farm and how she has found mushrooms in that area for forty years. So, that was where I was headed. To my glee, I took two steps in the woods and boom there was my first morel of the day. I spent a good half hour working this area and found 22 mushrooms. All I could think about is “man maybe this is the day I can put 5 or 6lbs in the bag and start giving them out to family and friends”. Not sure why I enjoy finding them and giving them away so much. We usually eat them three or four times. After that I make sure that people who are unable to go or have no place to go, get a pound of mushrooms to eat. I continued on my day, ended up walking over five hours, and only found one other small patch of seven morels. So somehow, I ended my second trip with 29 as well.

After two days of limited success, I was determined to find another mess of mushrooms. So, I headed to one more spot that I have in hopes of a little better result. Once again, I spent several hours working up and down the hills, along the field and creeks and this time I only ended up with 22 mushrooms. This is not usually the case with me after the first time out, but this season just was not shaping up to be a good year for me at least. The weather kept turning cold for a couple of days. Then we would get a little heat up for a day or two and the temperature would drop. After three days of mushrooming, I was thinking that it might just not be my year.

After the third day in a row mushrooming, I decided to sit out a day and my buddy Al calls and says we are all set to go mushroom hunt this area he found 7lbs at a couple of years ago in one spot. We set out on Sunday morning to see if our luck would be much better. We started early and started finding a mushroom here and there. We walked the edge of the field where there was dead elm after dead elm. The area looked perfect. As I walked up to this old trash dump, I look across the gully and I see a perfect dead elm. The bark was falling off and there looked to be a couple in a small group. I yelled at my buddy Al who was heading that way and said there is a couple of perfect dead elms over there to check. He stated that was where he had found them a couple of years ago. I was standing on the other side of the gully and Al stated “I don’t see any”. I was hoping to find the mother lode. I decided to head down the side of the gully and when I did, I look up and there is a group of the biggest greys I have ever found. I started looking around and there were mushrooms absolutely everywhere in this trash dump. I have never seen anything quite like this. As I was looking up the hill, I could see groups of mushrooms under the grass, under the rose bushes and for the first time ever in a tire. Yes, you heard that right… a tire. Take a look at the picture with the article and you will notice a large mushroom in the tire but won’t you see there was actually three large mushrooms in the tire. You just had to reach to the inside and pull them out. Now, we did not eat these three mushrooms because they had black on them from the tire I believe and was not sure anyone should eat them. After picking that group of mushrooms we continued mushroom hunting for a few more hours finding a couple here and there. When we were all finished, I put the mushrooms on the scale, and we had a little over 5lbs. So, for the year I probably ended up with 8 or 9lbs of mushrooms so it was a decent year. I never did make it out in May so I probably could have found a few more.

Since I was finished mushrooming for the year, we had our annual Lake Shelbyville trip. We have been going to Lake Shelbyville for ten or so years in the spring and sometimes we head down in the fall. My wife and I actually spent a short honeymoon there when we got married. We had such a good time we just keep going back. We usually try to go down for four days but being a softball coach, we were only going to be able to make it down for three days. We set off Friday morning and headed to Lithia Resort. We arrived to a beautiful cabin, which would be our home for the next couple of days.

After we unloaded, we headed to the lake. Leah, Cliff and I headed to my favorite spot. We weren’t there to long and we started catching some fish. We weren’t knocking them dead, but we were catching four or five keepers and hour. As I was rerigging one of my poles, a man came by and ask how we were doing. I told him ok but not catching them like crazy by any means. The gentleman looked at me and said, “if you go two coves over on the point with the wood, I caught over 100 fish in an hour”. I said, “I really appreciate you helping us out we will go give it a try”. We pulled up the trolling motor and off we went. It took us a little while to find them but when we did, we started catching some nice fish. Leah caught a nice 12” fish and while I was taking her picture she hooked into another 11 ½“ fish. She was on fire with the big ones. We trolled around, drifted and even threw some jigs at the bank and for the most part all of it was working. It finally came down to we needed one under to put the limit to rest. Finally, after ten- or fifteen-minutes Leah boated the last of the limit and to the fish cleaning stations we went.

After a successful Friday I was looking forward to Saturday morning. As the morning arrived, Tim Conover decided he was coming with Leah and me.  We actually headed back to our favorite location to see if the bite was any better. We started fishing and starting catching fish regularly. Again, not one right after another but many of the fish we brought in was over 10”and we decided the day before we were not keeping any of the unders unless they were 9 1/2 “to 10”. It took us about five hours, and we had our limit so we headed back to clean fish and guess what? The motor would not start. A rookie mistake I charged the trolling motor batteries and not the big motor battery. Luckily, this is the second time I have done this and had put a pair of jumper cables in the boat.  We were able to unhook a trolling motor battery and use it to jump the big motor and we were off. Every time something like this happens, I think of my dad and how he would say, “Master of disaster is at it again”. Miss that old man, he sure would love being on these trips with us.

The last thing I want to talk about is Lithia Resort. I have worked with Cindy over the last couple of years but haven’t stayed there in the past. I was extremely pleased with her customer service. She is so nice and even called me on Monday to make sure we had a great time. The cabins there are amazing. The place is kept in immaculate condition. If you ever are looking for a place to stay in Shelbyville, I would check out Lithia Resort at www.lithiaresort.com or call Cindy at 217-774-2882. Also, if you are heading to Shelbyville one of my favorite guides is on that lake. If you want to get on the fish fast call Matt England at England Expeditions for a guided crappie trip. His number is 217-520-3653 or check him out on face or his website www.englandexpeditions.com.

One of the coolest things I have watched in the last couple of years was Chris and Brianne Hubbart create this masterpiece of a fox out of a silver maple stump. Chris was dropping off another piece to Lithia Resort and he saw this stump. He immediately had and idea of a fox. He went to Cindy and asked her to print off a picture of fox and he was going to start carving away. This was around 2pm and as you can see in the photos, it took some serious time to sculp and put in all of the detail. Chris and Brianne worked as a team each had their specialty and when they were finished it was site to behold. Chris was showing me some other pieces he has done, and he really does and amazing job. I spent 17 years doing events and I have seen my fair share of carvers but this attention to detail was like no other. I thought this fox was amazing until he showed me his big foot. You can check Hubbart Wood out on facebook, Instagram, you tube or at www.hubbartwood.com.

It was a great weekend spent at Lake Shelbyville and I look forward to our next trip.