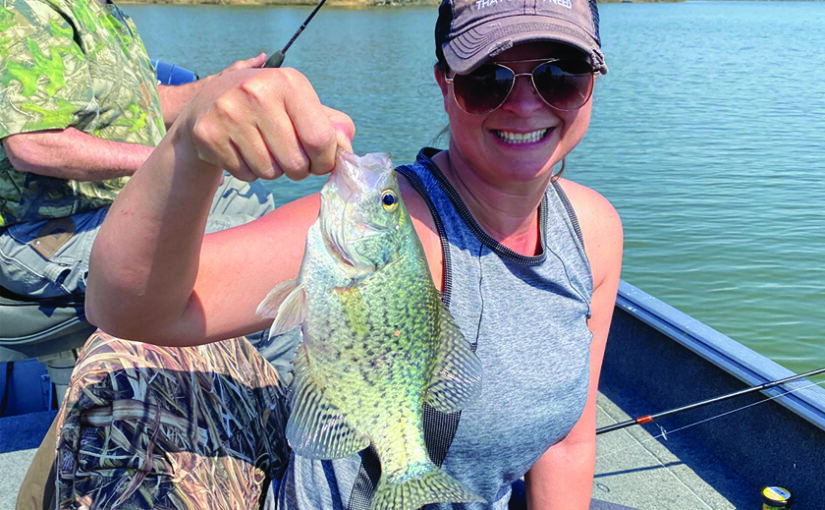 I feel as if spring has arrived and once again, I always make the promise to do more fishing.  As I sit here, the temperature is 54 degrees and all I really care about is getting to the woods to find some mushrooms, but the ground temperature is not where it needs to be quite yet.

So, I guess until the mushrooms start popping good, I might as well spend some time on the water. Every spring I see people post about Clinton Lake. With the hot water discharge it is always the first in the area to warm up so it’s our best shot at catching some crappie.  It was Sunday March 27th, and it was anything but warm. I had been working on a house project for a week, so I was ready to get out of the house no matter the temperature. I called Al and his brother Bob to see if they wanted to take a trip over to Clinton Lake. I knew Al would say yes but wasn’t sure about Bob. To my surprise they were both anxious to wet a line, so we set up our time to leave on Sunday and off we went.

When we pulled off the interstate to get gas, I realized that the 7-10 mph winds they were calling for where not even close to accurate. The wind felt as if it was blowing 15 mph with gust over 20mph and it was 8 o’clock in the morning. I looked at the guys and said, “I think we just took a hour and half road trip because I don’t think I am getting on the water today”. To my surprise, even Al was having second thoughts. We decided we were this close we might as well go look at the lake and see how bad the waves are. Luckily, we noticed if we stayed on the North side of the lake, the wind wasn’t too bad. So, we headed for Ol’ Joes Bait Shop in Dewitt to get some minnows.

loading in the boat, we noticed several boats on the water and they were all headed towards the discharge. I figured that must be where the bite is so we followed suit. We started using bobbers and minnows and of course, I was using a jig at times to see if it would help our outcome. Unfortunately, we were only catching a few and none that had any size to them. We went from school to school of fish without getting much action. I noticed a few people throwing jigs under a bobber about two feet. I usually don’t try this technique very often, but I was pretty sure it was a guide, so I figured they know this water better than myself. I tried the jig and bobber without any luck, so we decided to try minnows up in the shallow areas on the rocks and we started catching a few crappies. It seemed we could catch a few bluegills before we would catch a crappie but hey, we were catching a few fish.

It was early afternoon, and we were all about ready to call it quits when Al seemed to hook into a monster fish. He was using an ultralight rod and reel with 4lb test and the fish he had on wanted no part of the boat. Al must have fought that fish for five to ten minutes until we finally had a good look at him. As soon as Al saw the fish, he started hoping around the boat like a little kid on Christmas. He was smiling ear to ear and all he could say is get it in the net. Every time he would get it to the surface, all I had was the tail to net. I could tell he was getting frustrated, but I knew if I didn’t net it properly, I would be the reason the fish got away. After a few more tense moments the fish was finally tired and came up and gave me the perfect opportunity to land him in the net, which I did. We searched my boat for the new scale I bought last year and couldn’t find it. Of course, the next day I went looking for it and it was in my tackle bag the whole time. Literally, it was sitting at my feet. Sometimes I scare myself. We did measure the fish and it was 21”. I would assume it was between 5 ½ to 6 lbs. Definitely the biggest bass Al has ever caught to it helped make the trip home a little more enjoyable.

When I got home from my first fishing trip of the year my good friend Brandon Bach called and said let’s go catfishing on Thursday. I had to do April deliveries Monday – Wednesday so Thursday sounds great.  Of course, Monday and Tuesday of delivery day was beautiful. However, we were not going to be that lucky on Thursday. The bright side is they weren’t calling for heavy winds and a high of 45 degrees. I am not used to fishing much for catfish this early in the year, but Brandon always seems to find the fish so why not give it a shot.

We arrived at the river early Thursday morning and of course there wasn’t another boat anywhere to be found. I thought well that might not be a good sign when no one is hitting the water. Once loaded in the water we headed to Brandon’s honey hole. We anchored and started fishing. The first spot was giving us a few hits, but we were unable to get a hook set. After fighting the light bite for an hour, we talked about moving to the edge of the channel where Leah and I had some luck last year. We ran the boat around the area looking for fish and of course they we scattered out through most of the area, so we found a good spot to anchor and away we went. It wasn’t but a couple of minutes with our poles in the water the bites started coming. Boom! I had a fish on and the fight began. It didn’t take long after that the poles started bouncing again. Boom! Another, then Brandon had one and back and forth, we went for the next couple of hours. It was some of the best catfishing I have seen on the river and the water was a balmy 48 degrees. After a couple of hours, the bite slowed so we tried a few different spot and caught one or two in each spot. It was getting close to 2pm and we decided to head in the for the day. We ended up with 26 catfish on the day.

I thought after my fishing trip on Thursday I may not fish for a few weeks until after mushroom season. I was wrong. Leah was itching to go and the weather for Easter looked like the perfect day. Usually, we have family get togethers, but this year was different. So, instead of a traditional Easter Sunday we went to Clinton Lake fishing. I didn’t think there would be many people on the water but yet again I was very wrong.  The lake was very busy so I figured the fish must be biting. We headed towards the heated discharge and saw plenty of people catching fish. Unfortunately, it didn’t seem to be us. I heard a couple of people say they just got their limit and were headed in. I knew the fish were biting just not biting what we were offering. I saw an older gentleman sitting off of a point in 10 to 12 feet of water and watched his technique. He was throwing out the jig and letting it set for a few before reeling very slowly. I saw him set the hook and he boated a nice crappie. I reached over and grabbed my jig pole and on the first cast a nice 10” crappie came over the rail. My next two casts were the same thing. I told Al, Leah and Bob “You better pic up your jigs and start trying this technique”. Well, that didn’t work very well. Everyone picked up their jigs and started fishing. They were not getting hits like I was, so we moved to a new location and after about ten minutes of them throwing the jig it was over. Back to the minnows. I went back and forth most of the day and caught several nice fish on the jigs. We did find a couple of old roadbeds that were just stacked with fish. Everyone started catching a few but unfortunately, most of them were short. I ended up with one shy of my limit and the rest of them had a few apiece. Our total for the day was 30 crappies.

I now have a few crappies in the freezer so the next thing to do is locate the mushrooms. I was hoping to have a nice picture of some morel mushrooms to show you, but I guess that will have to wait until next month.