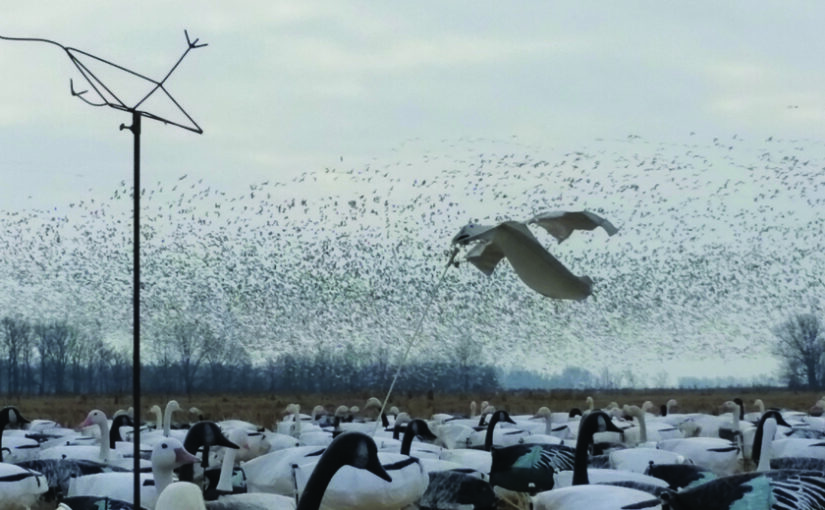 I struggled to see as I repacked my camera equipment on the tailgate of the truck.  “Dark is not the word for this,” I mumbled to myself.  We were out in the middle of a corn field, and there was absolutely no light except the small beam coming from a battery-operated topper light.  The others had already started walking down the long levee road toward the large spread of Snow Goose decoys.  I had my doubts about this snow goose hunting.  Yesterday had found me sitting in a layout blind for 12 hours looking at nothing but sky and very few birds. I like to have frozen my a.. off as the wind chill and temps never topped 30 degrees.  We managed to kill a few snows, but I had left with very few empty shell casings and one hell of a headache from the wind and the damn e-caller screaming in my ear.  You know the trip………. should have been here last week or snows don’t like the cold, or they must have gone out west feeding today.  The best one, just wait ‘til the juvies push.  I am a goose hunter from way back, and I assure you I have heard every reason for lack of shooting.  In fact, I have made up a few myself in my own pit back in central Illinois.

From what I can understand about these spring Snow Geese is that it gives waterfowl hunters just another reason to drop lots of money into a bottomless pit.  I have been on 12 of these damn hunts and killed 14 for a high.  I’m beginning to think these fabled 50 to 150 bird hunts you hear about have been fabricated by decoy manufactures and the pictures photo shopped from the same one pile of geese shot 20 years ago.  I mean, really.  I got on the kick years ago when this special spring season started.   I went out and bought 400 Texas rags and set in a wheat field along a marsh the first year with a cassette tape of snow geese and my son’s boom box. Didn’t kill any and haven’t killed many since.  The spreads have improved and so have the callers from those early days, but still no geese.  I have been with outfitters and buddies with the same results.  In fact, after yesterday, it was starting to make me think those damn things are unkillable.

The next morning, I could see the head lamps fading into darkness as I struggled to get the damn zipper up on my camera pack.  Finally, I was ready.  My pack and gun had left a few moments earlier on the 4-wheeler.   “I hoped I had thrown in enough shells,” I thought to myself.  I arrived at the spread a couple minutes later as the work had already begun, layout blinds, rotating machines, and a few decoys were in the process of being repositioned from the hunt the day before.  We went to another field yesterday.  “This field killed 40 the day before, I was told”.  I grabbed a layout and drug it into position with the others and proceeded to help with the setup.  First light found us loading the guns and crawling into the layout blinds.  It was peaceful as I lay in the blind staring up at the stars.   I could cop a few zzzzz’s today.  The wind had laid, and the temperatures had risen overnight into the 40-degree range.

Honk, honk, screech, grobble, grobble, honk.  There it was.  That damn squawk box screaming into the morning sunrise ruining my peaceful slumber.  I just stared into the mesh face cover of the blind like I had done the 12 hours the day before and thought I’m back on the road early today if it ain’t happening.  Just about the time I finished my thought, I heard the somebody yell, “kill it.”  I threw open my blind and grabbed my gun only to see a snow topple head over heels into the wet field. “Where the he.. did, he come from,” I asked my buddy beside me.  “Not sure,” he said.  “Just floated in from behind.”  The morning glow was upon us, and to my amazement, it revealed giant flocks of snow geese going every which way looking for a place to feed.  Had my buddy not lied to me the day before when he said they were sitting from the cold?  Could this be the day one of those days that you have read about in the magazines?  I grabbed my Nikon camera and started to let the automatic shutter eat.  Geese were all around, locked up, circling, landing and floating over the decoys.  It was true there was such a thing as a Snow geese tornado.  I just stared at it through the view finder, never taking my finger off the shutter release of the camera.  The command of cut‘em was loud and crisp.  I was still on the camera when it pierced the air.  The next few seconds happened like a slow-motion movie through the lens of my camera.  The reports of the auto mag shotguns with extension tubes were rolling hard sounding much like a thunderstorm moving in from the Southwest during a hot summer day.  Boom, boom, boom, boom.  I could see the empty hulls flying like hail stones as the thunder of 7 guns released their power in every direction.  I twisted and ducked my head as a goose hit the ground beside me and brought me back to my senses.  Reload. Reload, my buddy yelled, they’re coming back for more.  Geese were still falling out of the sky a hundred yards out, delayed death from a stray pellets.  Cripples sailed in all around us bouncing off the ground like white beach balls.  I dropped my camera and grabbed my Benelli, as the command of cut‘em yet again sounded over the deafening screeching of geese and the e-caller.  Then again, the command came bringing the thunder down on the flock as it dropped into the spread, again and again guns came up on the unexpected flocks. Each time I sat up and grabbed a whole hand full of trigger, the recoil pounding me back down into my blind.  I am not sure if I hit a goose.  All I know is I got to dump my extension tube into a balled-up flock of snow geese.

Once again, the command of reload, reload.  There’s one coming back, the snow goose floated off to my left only a few feet over the spread.  Kill ‘em, Dan.  I raised my gun and folded the goose.  The mass of geese started working one field over as the dog, rounded up the dead geese and cripples.  This scenario played out all morning as singles, pairs, and small groups continued to work the decoy spread.  Each time, they were greeted by the thunder.  I was on my 4th box of shells and 500th picture when the action finally slowed by noon. I was amazed as the giant flocks dropped out of the clouds into a huge feed happening in a field to our west.  Never have I seen these many geese that were not in a refuge.  They just kept coming.

The dog found another 10 geese during the random round up by my buddy and his dog after they policed the field.  We all welcomed the break as we stood and stretched.  A few of the guys were filling garbage bags with the hundreds of spent rounds that had been tossed from the guns in all directions. The Fabled Snow Storms do exist the right day, right wind, and to be on the X. This story was on a guided hunt south of central Illinois, but with the large amounts of North bound Snows we are seeing the last few years it finally has me dipping into my pocketbook with my pits own spread and several members with lots of decoys, once again searching the spring weather pattern for the fabled Snow Storm….