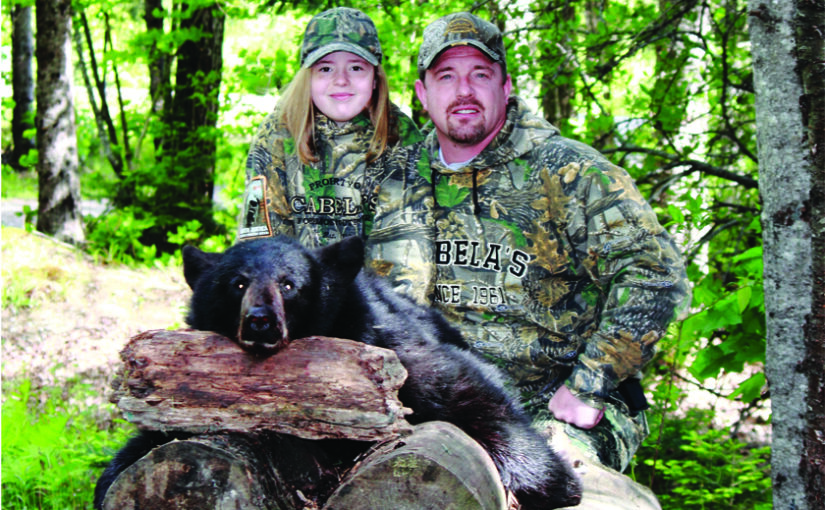 The Maine Event:  Reflections on a Father-Daughter Bear Hunt

May 30: Monday at sundown, we quietly packed our gear to evacuate the deep timber of the Penobscot Indian Territory and unite with our guide down the logging road. Burris Eliminator scopes draw ample light, and a last glance through the lens spotted a silhouette protruding from an uprooted tree base some fifty yards out. I dropped my pack and instructed Danielle to duck down. The copious shadow made its way across the narrow shooting lane, circling the bait barrel before vanishing into the lush vegetation. I needed two more seconds.

Danielle was now visibly shaken. “Don’t shoot the bear, Daddy. It’s too dark. Let’s go, Daddy!” She began to tear up. “Are you afraid of the bear, or is it the dark?” I inquired. She insisted we leave immediately. Barely to the logging road, she began to break down. Her breathing became irregular, and her heart was beating rapidly. I radioed for our guide Shelton to get to the meeting point immediately.

As a parent, the next thirty minutes were some of the scariest of my life. In the truck, three concerned men listened as I counseled Dani out of hyperventilating. We were twenty miles from Tomah Mountain Outfitters’ camp (a forty-five-minute maneuver down forsaken roads) and twice as far from any medical center.  My prayer was short but sincere, “Please, Lord, help us.” With much encouragement, she fell asleep from exhaustion, tucked against my bosom.

May 31: Tuesday, the men at camp lifted Danielle’s confidence, impressed that a ten-year-old was brave enough to face the fears of hunting predators in the dark woods.  I convinced her that this venture had to become a team effort, and she was as valuable to the project’s success as I. Fidgeting and noisemaking would have to be curtailed if we were to get a bear filmed and harvested.

Another Lady in the Woods

Like relationships with our daughters, Mother Nature has a way of altering the rules we plan and play our sporting games by, sometimes without notice. Her pleasant mid-day fair soon replaced Monday morning’s invigorating frost. Then, like the slow boil arresting one in the scorching afternoon sun, she again turned her aerostat back towards an evening chill before repeating her cycle the next day.

Tuesday, she threatened us with gusty winds and darkened skies before relenting. Wednesday evening, her emotional rampage caught us off-guard in torrential downpours, hastening the nightfall and spoiling our chance to see the ghost in the darkness we’d come to harvest. The vacillations in her repertoire made us vulnerable to our own expressive outbursts.

June 2: Danielle had done an outstanding job at sitting still and keeping the chatter to a minimum these last couple of days, and I hoped for her sake she’d see the reward for those efforts.

Thursday was special for many reasons. Danielle had abandoned the comforts of girlendom and ventured into the unchartered waters of tomboyism with her daddy. Trusting that her father would protect her against the wild’s unwanted advances, she now believed she brought something unique to the sportsman’s table. Naivety has its setbacks and advantages; a child may carry a false sense of cinematography prowess yet underestimate their aptitude for retrieving and deciphering the sounds of an approaching predator. Danielle did an excellent job filming parts of our documentary and let me know when we had company in the woods.

Once a day, Dani took hiatus from the watchtower; seven hours of silence in the wilderness are many to ask from a girl barely ten years old. She took breaks from reading Charlotte’s Web to draw. I will never forget her glances for affirmation, tilting her sketchpad towards me and unveiling masterpieces of raging, roaring bears rendered in crayon and ink. Then, with my nod of approval, she cuddled up against my leg for a short nap to re-charge her batteries.

camera.” Behold, on the rustic-cut trail, our trophy emerged at seventy-odd paces from the bright green ferns that foliaged the moist soil of Maine. The bruin peered forward, studying the bait barrel, then looked in our direction. This scenario played out for several minutes as I grew impatient.

I nestled my 35-caliber Dexter rifle into position over a cross pine limb inside our naturally-textured ground blind. As I pushed ‘Record’ on the camera, our visitor briefly exited stage right into the timber. As he re-entered our shooting lane, I vowed not to wait until he lumbered up and labored over the bait barrel at fifty-two yards before shooting. Crosshairs on the shoulder, I followed his slow but methodical investigative work.

Five yards behind the barrel, he stopped, sniffed the air, and looked our way, proceeding two steps to his left before I squeezed the trigger. The ‘crack’ of the discharged 225-grain projectile echoed through the woods, reaching my guide’s truck two miles away.

After digesting the moment, Dani said, “I’m so proud of you, Dad. You got me so excited I’m starting to shiver!” “So, was sitting out here four days, even in the rain, worth it?” I questioned. “It was SO worth it, Dad! Let me call Shelton.”

My princess insisted on dragging that bear out to the truck on her own. Not to be outdone, our guide took over at eighty yards out. The little girl that couldn’t catch her breath just two days prior could not be silenced on the way back to camp. Driving off the Penobscot Territory, we stopped to take in a magnificent sunset, the grand finale to an exciting day.

I still find myself reminiscing about our trip to Maine. Most men will never witness the strength and agility of ‘Ursus americanus’ up close in the virgin wilderness. In honest confession, I grossly misjudged the size of the target before me and shot an animal I swore I’d pass on days prior. Almost rescindiatory, I’ve rehearsed retorts to the anticipated jabs of buddies and the students I teach. But everyone who has seen the video agreed that this bear looked to be 200 pounds heavier than the little fellow I would find balled up just six yards from impact.

No, I didn’t harvest a record bruin. But young bears are still impressive mammals that excavate deep holes, relocate large boulders, and scale lofty trees with ease. No one can believe how fast this stationary animal propelled itself three feet into the air, spun around, hit the ground, knocked over a rotten tree trunk, and thrust off like a rocket – entirely out of sight within two gallops and two seconds of being fatally wounded.

That night at camp, I received the congratulatory handshakes of fellow huntsmen celebrating our success, but Danielle became a celebrity. Here’s proof that big things often come in small packages, and like our trophy mount, the memories my daughter experienced in the wild and her victory over fear will live with us forever.