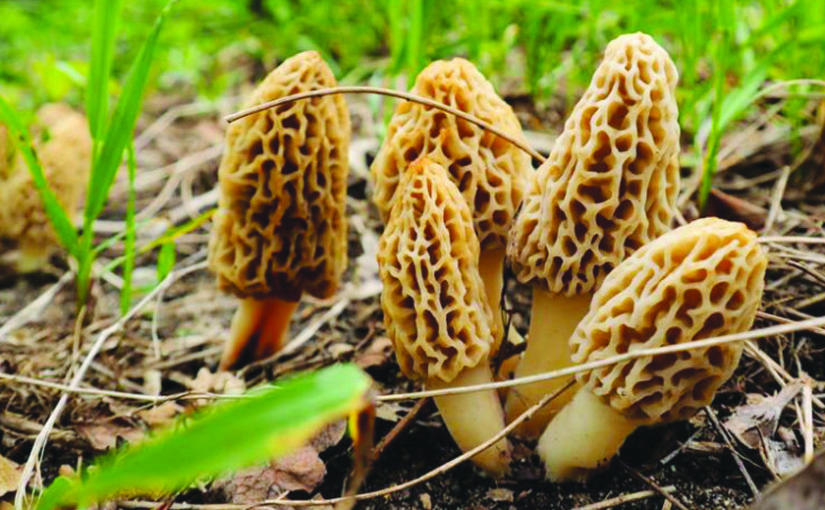 My favorite time of year is almost here. Within a couple of weeks, we should start seeing the Morel Mushrooms in all their glory. I have been hunting theses little tasty creatures since I was a very young boy. I remember when I was 6 or 7 heading out to my grandparent’s farm in Cuba, IL to see my grandma and grandpa. That particular day as I arrived my grandma was heading out of the house with a grocery bags and said” its time to go get some mushrooms.” At the time I was like “what the heck are we going to do?” She said “we are heading to the woods to find some mushrooms.” Well she had me at heading to the woods along with her. I remember following behind her as we walked through the apple orchard and into a small gully. As we walked to the edge of the ravine, I hear grandma say “there’s one! There is two, three, four, they are everywhere!” That was the moment I knew that I was all in on the mushroom hunting. We picked a bag full and headed back to the house. I had never eaten a mushroom that I recalled up to this point. One she breaded and fried those mushrooms I was in heaven and so my addiction began. I can’t remember a time in April and May that I didn’t go mushroom hunting.

Over the years I have read and studied information about Morel Mushrooms. I have attended many seminars by mushroom hunters and still to this day I believe I have learned the most from Tom Nauman with Morel Mania. Back in the late 1990’s I was producing sport shows across the Illinois area and I received a call from Tom about wanting a booth at our Central Illinois Outdoor Expo that was held in Peoria, IL. I was excited to meet Tom and see what additional knowledge I could squeeze out of him. He went in depth about the many varieties of mushrooms, where to find them and how to preserve them for future generations. It was at this time that I learned of mesh bags. Now I had been carrying around grocery bags since I was a kid, but this intrigued me. It made sense. Mushrooms are from spores and if you have them in a bag that doesn’t release spores you are not helping the future potential of your honey hole. For the first year or two of using the bag, I didn’t really notice a difference. What I did try to do is go from honey hole to honey hole following the same path. After a couple of years I started noticing that I was finding a few here and there along the path I had been walking for years. Now I have never found the mother load that I can say was a direct result of the mesh bag but I can guarantee a few of the mushrooms I have found over the years have been because of using the mesh bag to transport. Besides the bags don’t rip and I have two that I have had over 20 years now. If you would like to check out these bags you can order them on the web at morelmania.com.

If you are ready to hit the woods this spring here are a few pointers. The first thing is you shouldn’t even go to the woods until the soil temp is 55 degrees a couple of inches into the soil. I watch the soil temperature map and when we get to 58 – 60 degrees on the surface I know that we should have the 55 degrees a couple of inches down to get the mushrooms a popping.

As you will see in the some of the pictures on this page, I target Elm Trees that have died from Dutch Elm Disease. These should be your main target when entering the woods. You will find some trees that are completely void of bark and others that the bark is falling off. In my experience I look for the trees that the bark is still falling off. They seem to produce the most mushrooms. I know you can find mushrooms in several locations but if you’re a beginner and just go from dead elm to dead elm eventually you will find some morel mushrooms. I will look at every dead elm I can find in the woods. Another thing that is really good for mushrooms is fire. We don’t have as many fires around Illinois but out west and many places where massive fires have covered the landscape in black is a great area to visit. I have found plenty of mushrooms in the woods that weren’t directly around dead elms, but I will say most of my patches that are consistent for several years are around dead elms. So, if you just want to take a quick walk in the woods to see if you can find them target dead elms and you should have some success.

Now there are some mushrooms you have to avoid. A true morel had a network of ridges with pits composing their caps. Morels are distinct looking mushroom with a cone-shaped cap and sponge-like texture. They typically grow from two to six inches tall and come in a variety of colors. Some colors you will see are gray, black and yellow. There are a few mushrooms that you will find that they call false morels. Many people who are just starting to mushroom hunt worry about picking the wrong ones. Truth is if you live here in the Midwest you will only find a few false morels over many years of hunting. I have been hunting mushrooms a long time and only found a few false morels through my years. They are easy to identify. If the cap doesn’t connect to the stem at the base, then it’s not a real morel. On the false morels the cap will hang done over the stem and not connect until the top of the mushroom. I always tell people if you’re not sure then don’t eat it because more than likely you will have plenty of real morels to eat. If there is one you are not sure of just don’t eat it. You will see some of the false morels in pictures in this article to help you identify them while in the woods. The season here in Central Illinois usually starts around mid-April and goes into mid-May. I usually don’t go by dates but by the ground temperature. Once that ground temp is 55 degrees you will start finding the smaller black and gray mushrooms and as the season progresses you will begin to find larger yellow morels. My personal preference is the little grays. They pack so much flavor that I prefer them over the bigger mushrooms. Don’t get me wrong, they are all very good but something about the first mess of gray mushrooms are the best. Maybe its because I have been waiting a full year to fry them up.

I am not sure how my mushroom hunting will go after losing my best mushroom spot that I have hunted for over 30 years. This year may be a challenge for me finding new ground. I would like to throw it out there that if there is anyone that loves morels but doesn’t have the time or know how to go find them and you have some property…give me a call as I enjoy finding them little boogers so much that I will gladly give you the first pound we find, and we can split them after that. I just love spending time in the woods. For many years I would find 12 – 15 pounds and we would eat three of four pounds then I would make sure my family and friends have a few to eat as well. It’s almost more off the hunt I enjoy as I find myself sharing more of my find than eating them. I know many people charge high dollar for a pound of mushrooms, but I would rather make someone’s day and give them a pound then to make it profitable. Every year around the first of May I get several calls asking if I have extra mushrooms. If I do you can guarantee I will share the harvest.