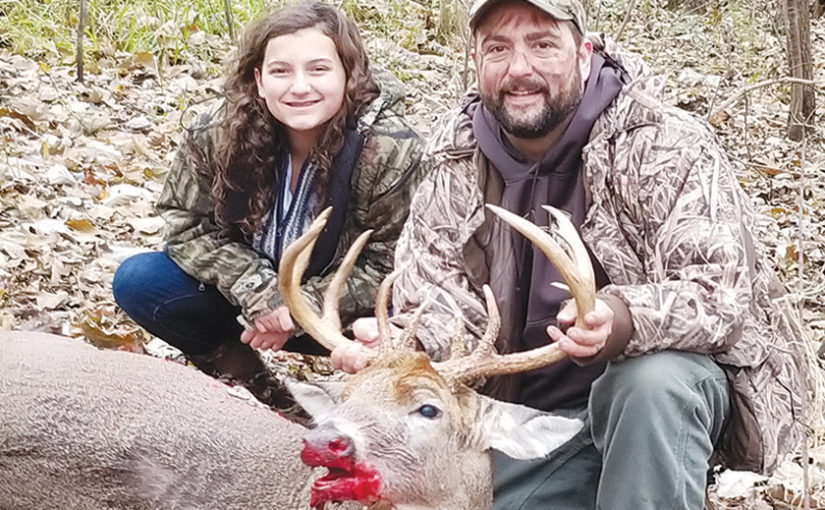 Well November has arrived, and many people have been hitting the woods and water. Many people have been spending time in the stand in the month of October, but I prefer to wait until after opening day of duck season to start deer hunting. I always feel like if I am in the stand sweating then I am probably doing nothing but spreading my scent in the area before the rut begins. So, I try to stay out until the magical first two weeks of November. As the opening day of duck season approached is seemed like it was shaping up to be a great opener and hopefully a great duck season period in Central Illinois. The last couple of years has been a real struggle for us but duck hunting has always been my ultimate passion. I scouted our club out a couple of weeks before and we had more wood ducks then I have ever seen that early. Don’t get me wrong we usually get our limit of woodies the first weekend or two but the last couple of years there wasn’t many bonus ducks to go along with them. After seeing that many woodies, a few pintail, four or five dozen mallard and several gadwalls I was thinking opening day was going to be good. As we approached opening day my friends were concentrating on deer and when I called them up one by one, they started canceling for opening day. I was at a loss for words! This is our opening day! Heck the last few years its been the only decent weekend we have had, and everyone is going to give it up? One friend was out of deer, so he wanted some meat for the freezer before shotgun season. I myself was out of deer as well but there is plenty of time for that. I decided to call Tim… surely he would be duck hunting. Sure enough he was in, so I made the call to Craig. His daughter had a softball tournament, so he was unable to make it. I am used to having five people in our blind and at least one other person if not more in another blind. It just seemed crazy to me that they were giving up opening day. Oh well I will show them. I will harvest my limit and then harvest my deer in the afternoon. Well that didn’t go as planned. As we walked to the blind and set decoys, we had the anticipation of a kid on Christmas morning. Then about 10 minutes before shooting time flock after flock got up from a few hundred yards behind us and took flight. For the next ten minutes we had ducks everywhere. As the first couple of shots rang out from the river the time had arrived. All of the sudden the ducks where mostly gone and nothing anywhere close to shoot at. After about 5 minutes a single came through and the flash of the barrel the bird folded. Cocoa was out to make the retrieve. A few minutes later a pair came in and Tim and I pulled up boom, boom, boom, two more woodies met their fate. I started thinking a few more woodies and we can be waiting for some bigger ducks to roll through. Unfortunately, after that we never fired a shot. We did get buzzed a couple of times but there just wasn’t any opportunities. I was rather shocked as we waited of the birds to return in smaller groups but as the morning neared 11am I knew our chances were getting slim. All in all three guys ended up shooting 3 wood ducks.  It was a far cry from the old days when we had 10 people shooting 50 or 60 ducks. I always day dream of those duck seasons where on a bad day you harvested a couple. My last few seasons if you harvest any you have had a successful day. After opening day, I just couldn’t bring myself to duck hunt again on Sunday. I decided it was time to shift my focus to my baby girl. She has practiced up with her cross bow and has become quite efficient. She has been wanting to provide food for her family since she was little. She is a little mini me through and through.

After getting my buck it was really time to make sure Ella had a successful hunt. We decided we would give it a shot the following Saturday. I could tell Ella was a little anxious. As the light started to come over the trees we saw a small button buck get up and start heading to our food plot. I asked Ella if she wanted to let this one pass and she said she wanted to try and take a shot. The deer came to the plot and stopped at 25 yards. Ella took aim and squeezed the trigger. I immediately knew it was a great shot and the deer only ran 20 yards and fell over. She was beyond excited shaking like a leaf and smiling ear to ear. It has to be one of my most treasured moments in my life. She was so excited that she provided for her family and that she had harvested her first deer. After taking care of that deer I asked her to get back in the stand because it was early and there could be some more deer come by. The only thing is now it had to be a good size mature deer. No more small ones, we got that out of our system. We were only sitting there another 30 minutes and we look to our left and there is a very nice mature 8 pointer that I believe is bigger than anything I have ever shot in my life. As the deer starts to turn the other direction I decided to use the grunt call and sure enough this guy turned around and starting walking our way. As he got to 30 yards I tried to stop him but he wouldn’t stop. Finally when he was at 35 yards I yelled. He stopped and Ella pulled the trigger. At first I thought she hit a little low but I wasn’t real sure. I was shaking as bad as she was and it happened so fast. The deer ran about 60 yards and stood there. I couldn’t see blood or anything and he wasn’t acting too hurt. Then he started walking and he had a limp. We couldn’t find the arrow but we did find blood. Ella started tracking and we followed blood for a couple hundred yards. Ella even got off the trail and found it some 30 yards later. She was really upset that she had hurt the deer. She didn’t want it to suffer. I explained to her no hunter wants to injure a deer. We practice and practice to make sure that doesn’t happen but in the real world sometimes things do happen. After watching her feel so bad I wanted to find the arrow so I waited until after dark and went in and found it. There was no blood on the arrow just a bent blade. I think she shot low and it just clipped his leg. As a matter of fact I am pretty sure I saw him gimping around still chasing does the other day. Now this weekend is shotgun season so let’s see what that brings. Please if you get the opportunity take a kid hunting this fall the chances are it will change both of you forever.

If you’re looking for a good read on the effects of EHD on the deer herd in Illinois check out Dan Vinovich’s article on page 42 and 43 and get the hunters perspective.