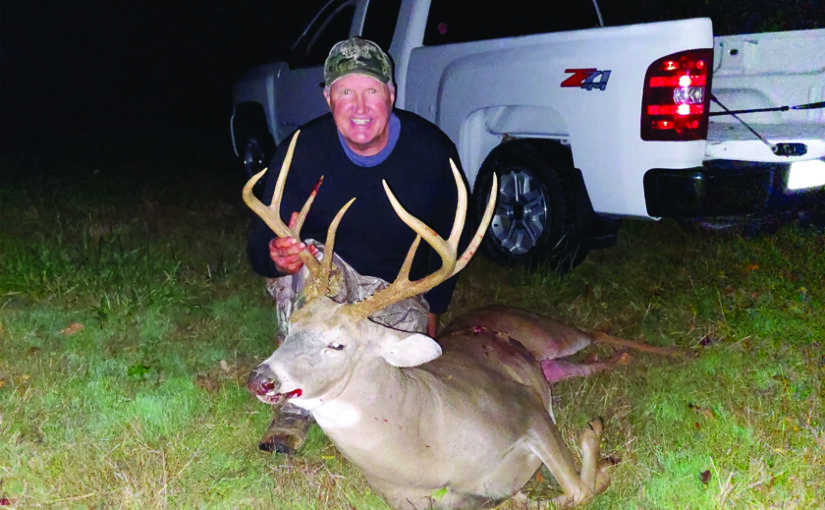 Pure adrenalin pulsed through my body along with the downward creeping of my body warmth as the hooded camouflaged sweatshirt was not up to the task! The Northwest wind was enough to suck even more warmth from my core but provided leaf movement on the trees to mask my slow position movement! My legs began to shiver and shake enough to hear a slight rattle of metal in the ladder stand I occupied.  This involuntary movement of my body must be controlled as the next few minutes of my existence were about to be rewarded if everything worked as expected!

This day was perfect.  Sunshine peered through the billowy cumulus clouds for most of the day, the wind blew a steady eight miles per hour from the Northwest, enough to provide predictable direction in stand selection.  Earlier this day, a cohort advised his cameras were lighting up with Deer Movement. Although I do not use cameras in respect for the animal, this information only confirmed my intuitive nature and past experience told me this was a good day to hunt the evening as temperatures would drop throughout the day to the upper thirties for a low.  Although early in this season of the fall, my destination was well planned as the area has been unmolested by human intrusion for the summer and early fall allowing the natural movement of animals and conditioning them to feel safe.  The cycle of the rut was yet to expand – allowing a planned ambush based on natural movement of the King of the Fall!

A young buck spied in the field of warm season grasses was feeding intently and moving with protection of the wind toward my location, a cut between fields, with stand offset ten yards within the interior of the wooded field edge.  The stand had been accessed by walking through a wooded drainage ravine just Northwest of a pond, in the wooded interior, populated by a flock of Wood ducks.  My entry was methodical enough to not alarm the group of Woodies only yards away feeding in the pond!

Movement caught my eye to the west!  A coyote, a young of the year, came loping through the cut on a steady pace.  The bow was accessed but too late for any action as he never broke stride and was quickly out of range, disappointed by lack of attention but happy to see this healthy specimen in his natural environment beginning his hunt for the evening.  The agitated squirrels revealed his path of travel through the woods.

To the Northeast a patch of brown was noticed in the interior of the field – definitely bigger than the eight-point buck still feeding in the same field.  Once visible through the tree limbs the high rack and wide stance of the heavy animal sent my excitement level through the roof!  He had approached from the Northeast working the wind – he had a chance of working toward my location particularly since the other feeding buck in his intensive feeding gave the feeling of safety to the wary visitor.  This was the last activity expected – to have a mature Buck enter the field this early!  The shadows now covered the entire field as the sun slowly dropped from view.

Careful not to let my mind wander with thoughts of success but focus on potential was my goal!  The smaller animal approached his elder and they ticked antlers; this was synonymous with a child playing with a hand grenade thinking it was play toy but still early in the year the elder played along!  I loved the distraction junior was providing!  Both were slowly working my way!

Wishing I had returned to my truck to acquire warmer clothing was now past – all attention was now on the upcoming moments!  A smaller buck unbeknownst to me walked through the cut.  Both Bucks now approached to work a scrape unknown to me but right in front of my location on the far side of the cut about twenty-nine yards distant!

The younger Buck animals reared on two legs to reach the tree limbs as he raked the still leafed Oak limbs.  Junior walked through but Senior held back!  Knowing heartache in the woods many times, thoughts still remained positive.  He held and held will within range but blocked by tree limbs!  Willing my shaking limbs and shivering body to stop – the world stood still!

Finally, he progressed!  I drew to full position and put the pin on his vital area as he walked – the decision to not freeze him had been made earlier as he was totally relaxed, fearing an alien sound may send him in the explosion of flight – I adjusted accordingly.  This was the moment every real bow hunter lives for, excitement, anticipation, fear of failure, realization of your goal – the arrow was off, and the sound was louder than expected but positive!  My eyesight could not follow as quickly as years past!  The marvelous animal ran North and entered the woods with Junior watching all the action!  As the Junior Buck kept peering into the woods, he confirmed my target was probably there!

Darkness was now overtaking the area, my examination of the impact site revealed little evidence placing a tinge of fear in my gut!  I decided to push ahead rather than succumb to the darkness and rely on lights to find his path.  The old boy had covered one-hundred and fifty yards but succumbed to the very lethal path of the arrow shot from my old bow!  Thanks to our creator and the joy this creature provided in his demise – for a common man such as myself this episode makes life worth living!